Whatever it takes when terror strikes 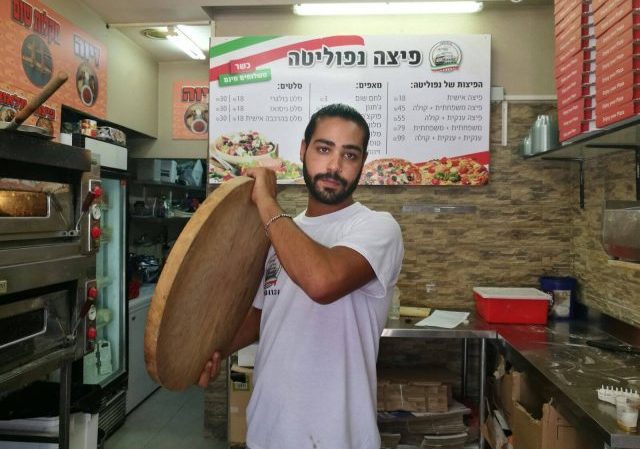 When Palestinian terror strikes, Israelis have learned the hard way that you use whatever you have on hand to fight back.

You may recall the case of the bus passenger who used his personal nunchucks to stop a terrorist who stabbed a soldier and stole his gun, All hail the Israeli Nunchucks Hero who subdued terrorist. Israelis also have used a guitar, an umbrella and a selfie stick.

Now we have a wood pizza tray used to halt an attack by a Palestinian on an Israeli Arab he mistook for a Jew. The Times of Israel reports:

Shlomi Madar added the heavy wooden saucer to the growing list of obscure objects used to subdue (or just slow down) terrorists over the past two years, when he went after a stabber outside his pizzeria in Petah Tikva, outside Tel Aviv, late Monday morning.

“I heard screams coming from the shwarma shop two stores down and I immediately understood what was happening,” Madar, 24, told The Times of Israel Monday, hours after the incident.

Just feet away, a 21-year-old Palestinian from Qalqilya stabbed an Arab bus driver whom he apparently mistook for a Jew. Israel Police spokeswoman Luba Samri classified the crime as nationalist — code for a terror attack.

Here is reported video of the attack:

Here is reported video of the capture of the terrorist:

UPDATE 7-30-2017: Via Israellycool, the security video of the incident. It shows the pizza shop owner hitting the terrorist:

“And, behold, I am with thee, and will keep thee in all places whither thou goest, and will bring thee again into this land; for I will not leave thee, until I have done that which I have spoken to thee of.” Genesis 28:15 (KJV)

15 Look, I am with you. I will guard you wherever you go, and I will bring you back into this land, because I won’t leave you until I have done what I have promised you.”

Wow, racial profiling by a terrorist, somebody needs sensitivity training!

Israel would be better off if they adopted a 2nd Amendment type law and started allowing concealed carry by citizens.

Aye, I was going to ask, aren’t they ‘allowed’ to bear arms?

There is no such thing as concealed carry in Israel. You either carry or you don’t. You can only carry if you have a licence.

To get that licence you have to have a very good reason (member of the reserve security services, or work and/or volunteer as a security guard; you live or work in a dangerous area etc.).

You also have to have a physical and mental check up, plus a police certificate of good standing (or whatever it’s called). And you have to complete a course in firearms training.

All this has to be renewed, if I’m not wrong, every year.

When you’re not using your gun it must be stored in a locked box or room, and the ammunition in a separate place.

People have the mistaken impression that Israel is a heavily armed society because such a large percentage of our population is in the army – and the soldiers all live and serve right on their own doorstep. No overseas duty, or faraway borders. Soldiers come home for weekend leave or even for a few hours sometimes, and they carry their weapons with them.

“People have the mistaken impression that Israel is a heavily armed society because such a large percentage of our population is in the army – and the soldiers all live and serve right on their own doorstep.”

I don’t have any mistaken impression about anything. It’s just surprising to me that the God-given right to bear arms is abridged in Israel, of all places, given history. I’m surprised that they don’t recognize a need for an armed population as protection against government tyranny at the least, and also yourself and those around you otherwise.

There is no right to bear arms in Israel. And a leftist feminist group bragged a year or two ago that they managed to get the government to reduce the number of licensed handgun owners in half over the last couple of decades. “to reduce violence against women”.

Any excuse for gun grabbers anywhere. Even if it costs lives.
In general, I have always felt that the Israeli left copy-cats the American left even when the issues are different.

The “peace now” morons were just envious of missing the anti-Vietnam movement.

Oh, and license renewal is every 3 years with a medical check up and range time every time.

“…you have to have a very good reason…”

The fact that the country is surrounded by lunatics who are constantly shooting, stabbing and blowing people up isn’t a good enough reason?

And oh yeah, I have a God-given right to defend myself. I almost forgot that.

That doesn’t look like a regulation pizza tray to me. He might have a problem. It would be a shame if they got him on a technicality.

I’m pretty sure it has a shoulder thing that goes up.

It’s funny seeing video of an attack that happened in my hometown on an American blog. 🙂

Yeah, the pizza guy is a hero. Most Israelis are heroes when it comes to the crunch, as the Prof has documented here.

God bless you, your country, and this man.

I would love to visit Israel at some point in my life.

You should interview him next time you’re in Israel!