The U.S. Senate Foreign Relations Committee has added more conditions to the Taylor Force Act, which includes cutting aid to Palestinian Authority (PA) since it rewards terrorists who kill Jews. From Algemeiner:

A revised version of the Taylor Force Act — amended by the Senate Foreign Relations Committee in advance of a vote this Thursday — places even more stringent conditions on aid to the PA as long as it operates a policy dubbed by critics as “pay-to-slay.” Currently, the PA spends more than $300 million of foreign aid money per year on monthly salaries to terrorists and their families that far outstrip the wages paid to Palestinian professionals, including the PA’s own civil servants.

It is with extreme sadness that I write to inform you that Taylor Force, a student at our Owen Graduate School of Management, was fatally wounded March 8 in a stabbing attack while on an Owen school trip to Tel Aviv, Israel. All other Vanderbilt students, faculty and staff on the trip are safe.

Taylor embarked on this trip to expand his understanding of global entrepreneurship and also to share his insights and knowledge with start-ups in Israel. He exemplified the spirit of discovery, learning and service that is the hallmark of our wonderful Owen community. This horrific act of violence has robbed our Vanderbilt family of a young hopeful life and all of the bright promise that he held for bettering our greater world.

Taylor’s family and his friends and colleagues have our deepest sympathy and utmost support.

The professor noted the services in Israel and Vanderbilt for Force:

On Friday, March 11, 2016, a service was held for him at Ben Gurion Airport as his body was being sent back to the United States for burial. Former Knesset member Rabbi Dov Lipman arranged the ceremony and officiated, and he was joined by William Grant, Deputy Chief of Missions at the US Embassy in Israel and US Army representatives in Israel.

The Times of Israel published a report on Monday that detailed how PA payments to these terrorists “now equal half its foreign budgetary aid.”

All in all, including prisoners and ex-prisoners, the total comes to $344,313,451. That is “equal to 49.6 percent of the funds Ramallah expects donors to contribute to its budget over the year.” 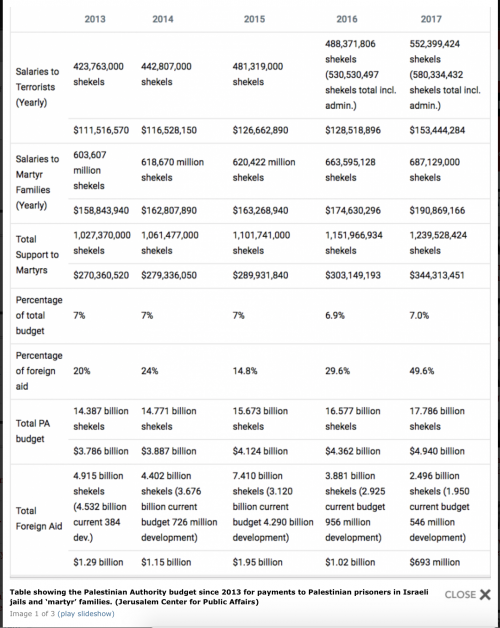 The legislation will strip funding to the PA if the State Department determines authorities haven’t stopped paying terrorists for murdering Jews. Other changes include:

Among the notable changes marked up by the Foreign Relations Committee is a clause calling on all donor countries that fund the PA to “cease direct budgetary support until the Palestinian Authority stops all payments incentivizing terror.” This demand is aimed in the main at European countries.

The conditions through which the PA receives US aid would also be tightened. The PA would be required to revoke “any law, decree, regulation, or document authorizing or implementing a system of compensation” for terrorists and their families — a wording broad enough to cover the potential loopholes involved in navigating the PA’s complex rules for the payments.

In addition, as part of its certification of PA compliance, the State Department would be required to submit an annual declassified report specifying the dollar amount spent by the PA on terror payments, as well as its general progress in ending incitement.

The bill allows a few exemptions to the cuts, including aid that actually will go to needy Palestinians. It protects aid to “six medical facilities comprising the East Jerusalem Hospital Network – which provide medical services unavailable to Palestinians in the West Bank.”

Will the Bill Pass Into Law?

The Senate Foreign Relations Committee will review the bill on Thursday. President Donald Trump has said that he supports the objective of the bill, “but did not unequivocally endorse it.”

The bill came out in February, but the White House hasn’t spoken much about it. This has caused worry on Capital Hill and lawmakers wonder if Trump’s administration believes “the legislation would disrupt their attempts to broker an Israeli-Palestinian peace deal.” Trump did bring up the “pay to slay” payments to PA President Mahmoud Abbas last May.

Israeli Ambassador to the U.S. Ron Dermer also put fears to rest that israel did not support the measure. From The Times of Israel:

“Israel believes that the United States should end economic assistance to any government that pays people to kill Jews,” he told a crowd at the Christians United for Israel’s annual conference in Washington. “Period.”

Impressions of Israeli consternation over the bill have stemmed, in part, from a June letter signed by hundreds of high-level Israeli military officials warning the bill would spur a security crisis.

The letter, which was orchestrated by Commanders for Israeli Security, said the legislation would “undermine PA stability; expand the circle of frustration and hostility; erode the security coordination; and thus hurt Israeli security.”

But a source close to the group told The Times of Israel that their letter of opposition was to the bill’s “original language” and that they would “support the amended draft.”

The only reason not to pass this is if the administration wants to use these funds as leverage in negotiating a peace deal.

There is no reason why US taxpayer money should to to Palestinians. Period. There are plenty of rich Arab countries that should be supporting them. And if these countries don’t think the Palis deserve support then we should certainly not support them either.

idgi, this makes no sense, why are we giving any money to Palestinians, regardless of their paying terrorists?

Why are they still called Palestinians? They’re arabs. And even if they were Palestinians their pursuit of a nation inside Israel would not be justified. If Trump accomplishes one thing regarding this issue it should be to shatter the accepted lie that the concept of Palestine is legitimate or a good idea.

The bill allows a few exemptions to the cuts

Oh, good. When reading this I thought there was some danger of the Senate actually doing something right. But I need not have worried; it seems this will be one of the usual legal “doilies”—artful arrangements of holes.

Doesn’t the administration have the ability to withhold some of the funding the PA receives anyway? If they have the ability to do so they could use it as a way to push the PA to clean up their act and to come to the negotiating table with Israel. If the president doesn’t make any headway with the PA then Congress should step in and take their funding away.

Bottom line: at this moment, the American people are subsidizing Palestinian terrorists and their families who are responsible for the murder of Taylor Force. Why not send them Ramadan gift baskets for the holidays?

Sending one dime of taxpayer money to these heathens is too much.