“All of the quotes attributed to the Secretary-General are fabricated” 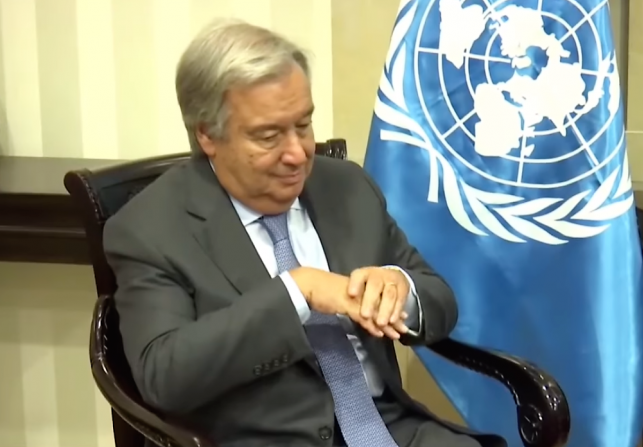 Pallywood is the cottage industry of Palestinians and Palestinian supporters who concoct facts or present facts in misleading context in order to start viral anti-Israel narratives, such as the false claim that Israel opened dam gates to flood Gaza, and a myriad of other false claims.

The Tamimi Clan is particularly adept and active, sending children to confront soldiers to create false narratives of Israeli brutality towards children. Bassem Tamimi and Manal Tamimi are heroes to the anti-Israel movement because of their fake media operations.

Among our recent posts relating to Pallywood are:

Pallywood is an important part of the propaganda war on Israel. And no one does Pallywood better than Palestinian leadership, both the Palestinian Authority and Hamas, for the purpose of inciting violence. 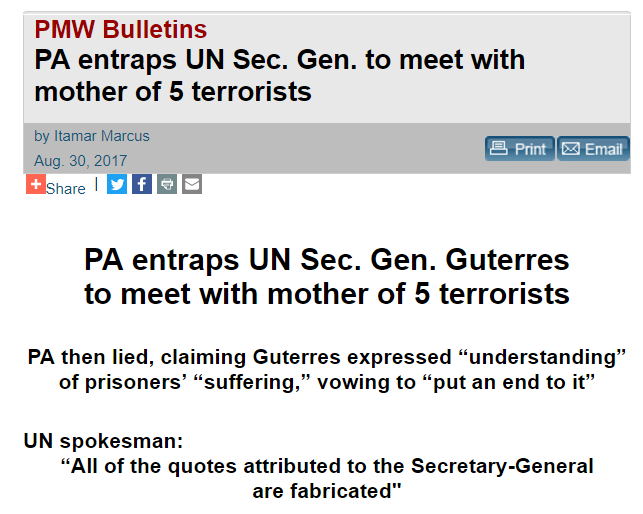 The Palestinian Authority entrapped UN Secretary-General Antonio Guterres into meeting with the mother of 5 Palestinian terrorists yesterday, and then lied about what happened.

According to a UN spokesman, Guterres was not scheduled to meet the families of terrorist prisoners but were surprised by the sudden request of the PA to meet with “mothers of detained children,” as reported by The Times of Israel:

“At the end of a meeting with Palestinian officials this afternoon in Ramallah, the secretary-general was informed that a group of Palestinian mothers of detained children wanted to give him a petition. Confronted with the situation, he received the group which presented him a petition.”
[The Times of Israel, Aug. 29, 2017]

The PA’s official news agency WAFA presented it differently. It described Guterres’ meeting with parents of prisoners, including Latifa Abu Hmeid, mother of 5 terrorists, 1 who was killed as a “Martyr” and the other 4 who are serving between them 17 life sentences, very routinely, without any reference to it not being on the schedule:

“UN Secretary-General António Guterres met this evening [Aug. 29, 2017] in Ramallah with several families of Palestinian Martyrs (Shahids) and prisoners that are sitting in the Israeli occupation’s prisons… Present at the meeting were Latifa Abu Hmeid…”
[WAFA, Aug. 29, 2017]

PalMedia Watch goes on to explain on the PA then attributed words to Guterres that he didn’t say:

This is what the PA claims to have told Guterres:

“The prisoners’ families demanded that the UN secretary-general act in a serious and concrete manner to save the lives of more than 6,500 Palestinian prisoners and female prisoners sitting in the Israeli occupation’s prisons from the grave violations that the [Israeli] occupation Prison Service perpetrates against them, such as medical neglect, administrative detentions, and the arrest of women, children, and parliament members.”
[WAFA, Aug. 29, 2017]

They also claimed that they gave Guterres a long letter which demanded among other things freedom for the prisoners:

“This freedom begins with the freedom of its prisoners and female prisoners, by saving them from the darkness of prison and oppression.”

Whereas this letter may have been presented to Guterres, the PA’s lie is that it claimed that Guterres responded positively to this by saying:

“We understand the suffering of the Palestinian prisoners. We will work together with the authorized and relevant parties in order to put an end to their suffering.”
[WAFA, Aug. 29, 2017]

But, no, it never happened

The UN spokesman denied that Guterres had said this:

“All of the quotes attributed to the Secretary-General are fabricated.”
[Ynet News, Aug. 29, 2017]

Is this really any surprise?

Lying has become a key component of the propaganda war on Israel. And even the U.N. Secretary General gets Pallywooded.

otherwise known as the hate Jews and Hate Israel Society.

Every Halloween the UN sends kids to collect for them –
we need to ban this and invite the UN to leave NYC with
1.1 million Jews about 15% of the city population.

Israel did not commit enough sins to satisfy the Palis, so they learned to lie. Now they think they can get away with lying about everybody.

Their lefty counterparts in the US and Europe have taken up the tactic.

Too bad for them, we all have computers and cell phones (cameras), now.

Many Pallywood productions are truly entertaining. While some unedited Israeli show the blatant staging others show the incompetence. My particular favorite genre of Pallywood productions are the Pallywood Fake Funerals, of which their are many. My all time favorite Pallywood Fake Funeral still leaves me laughing after many years of watching it because the viewer almost sympathizes with the Pallywood actor portraying the corpse because he is dropped so many times by his Keystone litter bearers that you almost believe that there goal is to actually make him dead by dropping him on to the rocky ground so many times during the procession.
https://www.youtube.com/watch?v=pgQLGYb9Xfo

US citizens support Palestinian terrorism thru the financial aid US supplies to the Palestinian Authority who pays terrorists families stipends. UN chief was a “useful idiot” for the Palestinian cause by being duped. Pals seem to be duping everyone. Super Dupers.

He’s only got himself to blame. When he was asked to meet “mothers of prisoners” he should have asked what they were in for, as he would surely have done in any other country.