Now The NY Times knows how it feels. 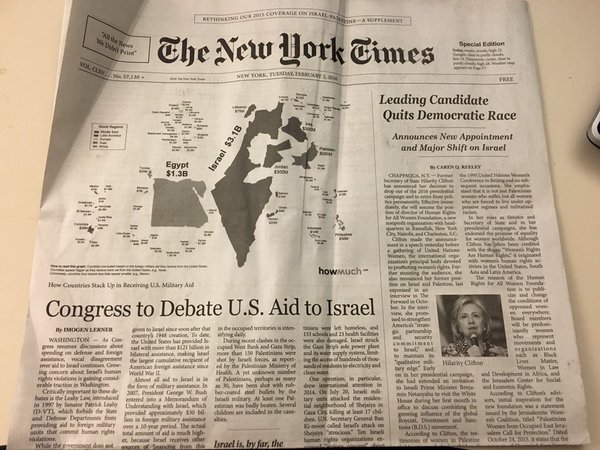 Pallywood is the Palestinian industry of creating fake images, events and stories to demonize Israel. It is a critical part of the worldwide, decades-long propaganda campaign against Israel. Pallywood is not done only by Palestinians. In fact, some of the most egregious perpetrators are Western anti-Israel leftists who create and spread false or distorted stories about Israel.

The NY Times just got Pallywooded.

Anti-Israel activists, the identities of whom are not currently known, created a fake Supplement Edition of the Times with fake stories meant to pursue anti-Israel narratives. 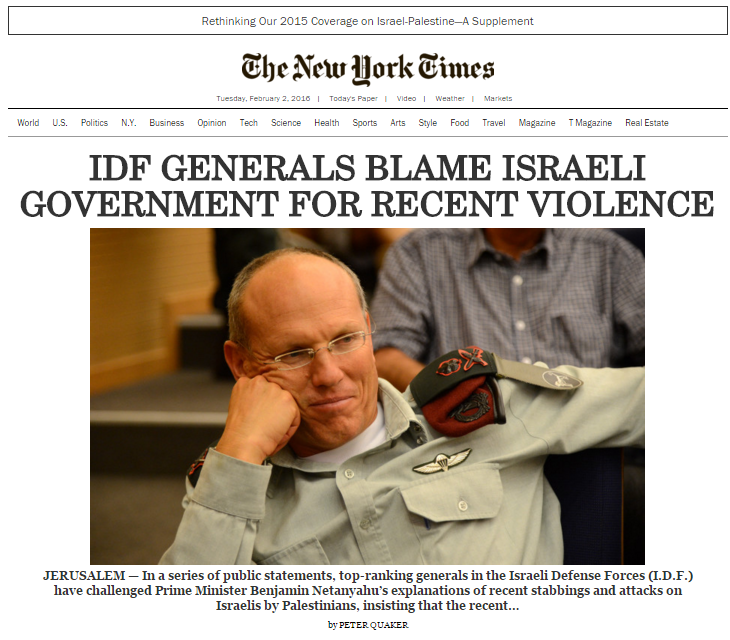 It was extremely professionally done, with multiple articles and fake advertisements. A reported 10,000 copies were handed out in New York City, including outside Times headquaters. That must have cost quite a bit.

This level of sophistication and expense makes it unlikely to have been done by your typical college groups, like Students for Justice in Palestine, who normally just disrupt and shout down Israeli speakers, or who pass out fake “eviction notices” to intimidate students.

The fake was so good that it fooled many people at first glance. Including the Editor-in-Chief of The Forward, a liberal publication popular among liberal Jews. 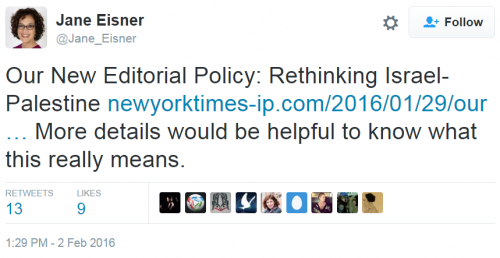 Here's the front page of today's fake New York Times being handed out this morning in Times Square: pic.twitter.com/8rZWWcRjYi

The Times was not happy with its name and trademark being use this way. Presumably its lawyers had something to say about it:

A spokeswoman from The New York Times said in a statement: “We’re extremely protective of our brand and other intellectual property and object to this group (or any group’s) attempt to cloak their political views under the banner of The New York Times. We believe strongly that those advocating for political positions are best served by speaking openly, in their own voice.”

But miraculously, *someone* saved links in the Internet Archive, such as the fake Editorial referenced in the Eisner tweet (note the fake ad on the right also calling for an end to aid): 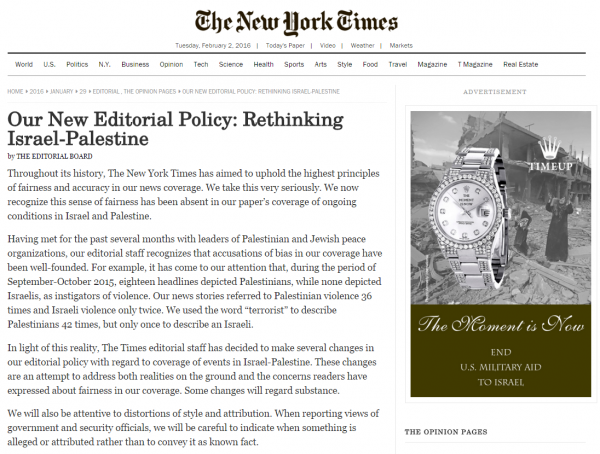 And another fake Editorial calling for an end to aid to Israel: 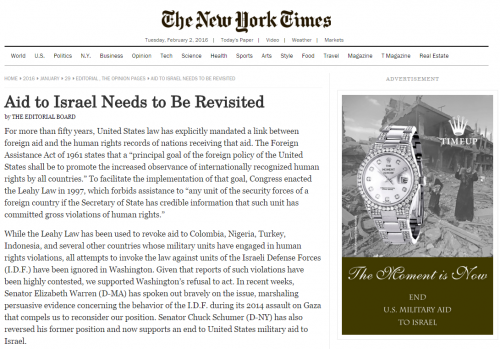 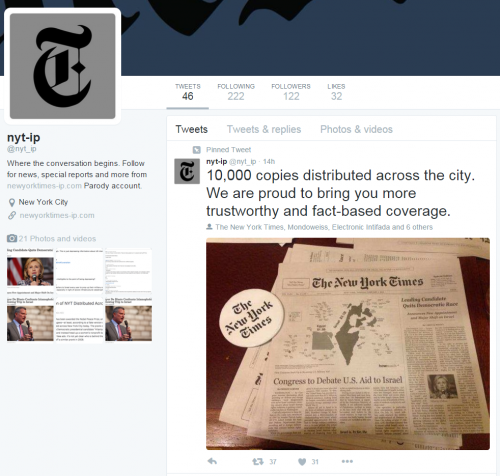 So what’s the lesson here?

Lies and distortion are central to anti-Israel activists and the war on Israel. Now the NY Times knows how it feels.

UPDATE: I can’t say this surprises me. Jewish Voice for Peace is taking credit for the fake New York Times edition.

Members of Jewish Voice for Peace New York and Jews Say No!, a New York City-based pro-Palestinian organization, created the paper to “point out how biased current reporting is on Israel and Palestine and to show what a paper that was fair and accurate could look like,” Just Say No! member Alan Levine, one of its writers, said in a statement.

The fake paper mimics the Times’ trademark fonts and formatting, and describes itself as “Rethinking Our 2015 Coverage on Israel-Palestine – A Supplement.” In addition to its “corrections” (“It has come to our attention that the vast majority of articles about violence in Israel and the occupied Palestinian territories have failed to include the names of Palestinians killed by Israeli forces.”) and articles, it includes fake ads, such as one for “TimeUp” watches with the motto “The Moment is Now: End US Military Aid to Israel.”

In an emailed statement, the Times said that it was able to shut down online versions of the fake paper because it was “deliberately designed to trade on our name and mislead users.”
“We are extremely protective of our brand and other intellectual property and object to these two groups – or any other groups – attempting to cloak their political views under the banner of The New York Times,” spokesperson Eileen Murphy said. “It is our firm belief that those advocating for political positions are best served by speaking openly, in their own voice.”

JVP’s statement listed by name the editors, designers, and writers behind the project. They included longtime New York-area Jewish leftwing activists, among them Rosalind Petchesky, a distinguished professor at Hunter College, and Donna Nevel, a founder of Jews for Racial and Economic Justice.

The fraud was first revealed in an “exclusive” at Salon.com, through Ben Norton, a long-time anti-Israel author who now plays the role of conduit for anti-Israel posts at Salon.

I’m guessing that JVP finally fessed up because people were onto their involvement, including Aussie Dave at IsraellyCool.

This does not surprise me in the least. JVP is one of the most deceptive anti-Israel groups around. Even its name is deceptive — it’s not Jewish and it’s not for peace. JVP members in Chicago helped disrupt the Israeli LGBTQ Sabbath event in Chicago, helped organize the anti-Israel propaganda event in an Ithaca third grade class, disrupted an event commemorating the liberation of Auschwitz, and are at the forefront of the BDS movement using its supposed Jewish identity to give cover to anti-Semites.

This also demonstrates what I said at the very outset of the original post — Western left-wing anti-Israel activists are among the worst at spreading lies and deceptions about Israel. You can read more about JVP here.

“Lies and distortion are central to anti-Israel activists and the war on Israel. Now the NY Times knows how it feels.”

Now THAT was some high comedy, rat thar, Prof!

The NYT has a GREAT BIG “lies and distortion” MACHINE attached to its printing presses.

THEY know EXACTLY how it feels, and have for decades!

THEY know EXACTLY how it feels, and have for decades!

Perhaps the Professor meant they now know how it feels to be on the receiving end of the lies and distortion.

Too bad it’s fake! I skipped past the Israel stuff and right to the Hillary drops out part.

I’m sure most people noticed no difference in the tone and coverage.

A brilliant pys-op…This is what conservatives with time and money should be doing everyday against the gov’t propaganda outlets and the minions of the Regime.Use Alinskys rule against them.We are fighting for the survival of America and traditional culture-Don’t be NICE guys…be WINNERS in the battle.

As Deep Throat said, “Follow the money”. Gee, I wonder where it will lead?

Even though the money for this most recent “edition” might not have come from Iran, it’s easy to imagine that the now cash rich country will be funding further “editions”.

Who said anything about Iran? I assumed they were paid for by the White House.

If you still believe there was a Deep Throat maybe you should revisit that WAPO scam as well.

There certainly was a Deep Throat. We even know his name: Mark Felt.

May “the old gray lady” die when its lying presses roll back over her.

I wonder if forensic analysis would demonstrate that the flyers were printed on NYT presses.

I saw them handing these out, in front of the Port Authority building. I noticed them, because the people doing it all seemed to be middle aged ladies. Which is different than the usual sort of folk who hand out free stuff. I wondered what the scam was, just based on that demographic.

Maybe I am overthinking it, but I wonder if this particular fake worked very well. Anyone who got their hands on one of the 10,000 and was a regular NYT reader – decent odds in Manhattan – would immediately know this was not real. The second article above the fold is about Hillary quitting her campaign. Not only is that a red flag, but the paper’s entire staff would be in morning and would devote the full paper to writing about it.

I agree. This has a high possibility of completely backfiring on the BDS movement.

“attempt to cloak their political views under the banner of The New York Times.”

Yes indeed, if anyone is going to cloak their Anti-Israel political views under the banner of the Times, it will be the Times editorial board not some second-rate, two-bit Anti-Israel group, thank you very much!!!

You have to admire the self-delusion of these idiots. “We are proud to bring you trustworthy and fact-based coverage” which is totally why they are impersonating another entity. Why no, they’re merely pretending to be someone else, but you can trust them!

It’s a publicity stunt by haters who knew full well the ruse would not last ten seconds.

The big question: now that the perpetrators’ names are known, will the NYT sue them?

And point of it is?
JVP must feel abandoned because Israel is off the front pages in the last year of O’s presidency. They hoped, I’m sure, that everybody will be talking about the evil Israel stalling the peace process because some kind of negotiation will be underway to press Israel into something, but O already has a Nobel, so he doesn’t need that as his legacy. He turned on Israel in other ways and JVP feels the urgency to do more to be noticed.

Jewish humor. This is not the kind of satire Muslims do well, except for sometimes Iranians.