Cultural appropriation, as Palestinian Christians are systematically cleansed from areas under Hamas and P.A. control. 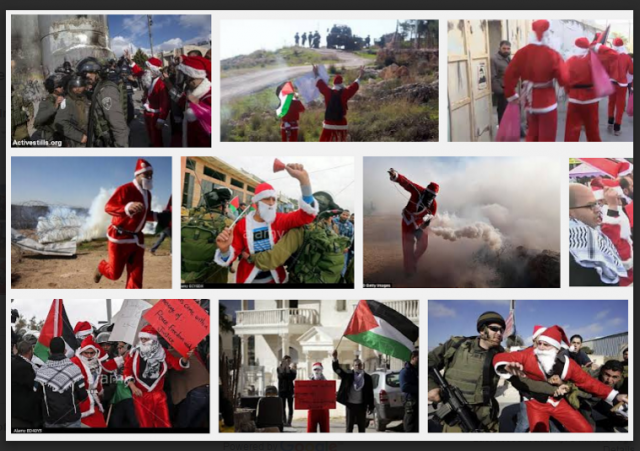 This takes place as the majority Palestinian Muslims systematically ethnically cleanse areas under Hamas and Palestinian Authority control of Christians:

Bethlehem as well as nearby Beit Sahour and Beit Jala were 86% Christian in 1950. But by 2016, the Christian population dropped to just 12%, according Bethlehem mayor Vera Baboun, a Catholic who is the first woman to hold the post.

This trend is echoed across the West Bank. In the 1970s, Christians made up 5% of the population. Today, they are just 2%. In Bethlehem, only 11,000 Christians remain in the birthplace of Christianity.

The situation for Christians is even more precarious in Gaza. In 2006, a year before hard-line Islamist party Hamas seized power from the more moderate Fatah, there were 5,000 Christians living in the strip. Today, there are just 1,100, according to Samir Qumsieh, the owner of Nativity TV, the only Christian TV station in the West Bank and a researcher focusing on Christian issues.

In Israel, however, the Arab Christian population has held steady with demographic growth, increasing by about 5,000 over the past 20 years. Today there are 164,700 Christians in Israel, about 2% of the population, a similar ratio to past decades.

The only place in the Middle East where the Christian population is safe and growing is in Israel. Which makes the cultural appropriate of Christmas for anti-Israel protest purposes and photo-ops sickly gruesome.

This cultural appropriation of Christmas by Palestinian activists is part of the same Settler Colonial ideology that hijacks and subjugates other peoples and movements, such as the Standing Rock Sioux pipeline protests, and redirects them to the anti-Israel cause.

One annual example of this phenomenon is the “Tear Gas Santa” photo op. Palestinian protesters, who on other days just wear a Keffiyeh and gas mask, put on a Santa Claus costume. They then stage a provocation, such as rock throwing or charging a checkpoint, precipitating a tear gas response or pushback – and bang, there is the photo op.

The “press” in an integral part of Pallywood. There is a symbiotic interaction with protesters. No protesters, no footage to send to editors or peddle on Palestinian propaganda websites. No videographers and photographers, no reason to stage the protest.

It’s all Pallywood, a fiction created for the cameras. This year is no exception. Palestinian propagandists deployed “Santa” to create photo-ops and media coverage.

Like so many Palestinian activist lies about Israel and Jews (the so-called Jihad of the Lie), the “Tear Gas Santa” meme has worked its way into even pro-Israel coverage, as this NY Post front page displays: 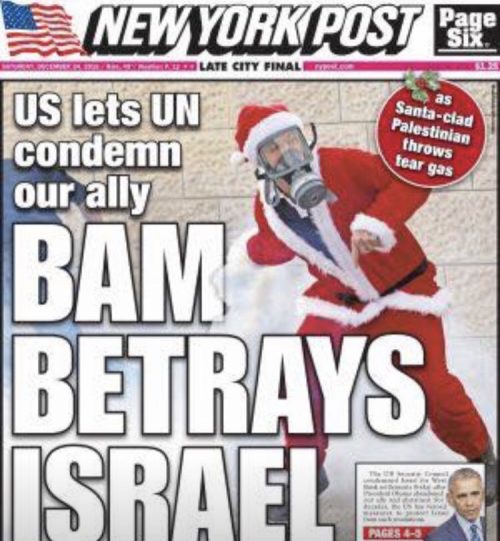 The Telegraph in Britain reports on this year’s protest, Palestinian protesters in Santa suits clash with Israel Defence Force:

Palestinian protesters, some dressed as Santa Claus, clashed with Israeli forces on Friday ahead of Christmas celebrations in the biblical West Bank city of Bethlehem.

The protesters were demanding unrestricted access to holy sites in Jerusalem….

During Muslim holidays, tens of thousands of Palestinian worshippers visit a key Jerusalem mosque, but Israel often restricts the visits based on age.

Israel says the measures are necessary to maintain security.

Why would Israel impose age restrictions and run security checks? Maybe because Palestinians have a nasty history of trying to blow things and people up in Israel, like the Hamas cell just arrested for planning such bombings. And the so-called “Knife Intifada” has seen dozens of stabbing attacks.

But as always, it’s the photo-op above all else. The Mirror in Britain plays along for the cameras.

The Electronic Intifada has a report that is a paradigm of unintentional propaganda self-parody:

Approximately 100 protesters, some of them dressed in Santa Claus suits, chanted against Israel’s military occupation and for Palestinian freedom.

“Jesus came with a message of peace, his city suffers oppression,” one demonstrator’s sign read.

“Santa Claus stands with the Palestinian people,” stated another.

Here’s the video? Notice that there are more photographers and videographers than protesters. How much you want to bet that if we had the full unedited video, we’d see “Santa” intentionally going to the ground and later getting back up?

There’s a precedent for that:

Here as some more efforts to spread the Pallywood “Tear Gas Santa” story (it looks like most of the photos and video are from the same protest, but you’d think this was a widescale occurance).

TODAY: Palestinian, International and Israeli activists, some of which dressed as Santa Claus, protest against Israeli occupation #Bethlehem pic.twitter.com/G7Fxc2Mx7J

Watch how Israeli forces violently clash with Palestinian protesters, some in Santa suits, ahead of Christmas celebrations pic.twitter.com/mArkL7yAlx

Now: Santa in a cloud of Israeli fired tear gas at the Bethlehem Wall. Merry #Christmas ??? and a Happy New Year from #Palestine ?? pic.twitter.com/0xUHHWPaem

Much as all these protesters claim they are ready to be martyred for Allah, my guess is that if the violent and highly confrontational ones start ACTUALLY dying in large numbers that it will they’ll learn that violence will not be tolerated and adjust.