Twisting her words led to threats of sexual violence. 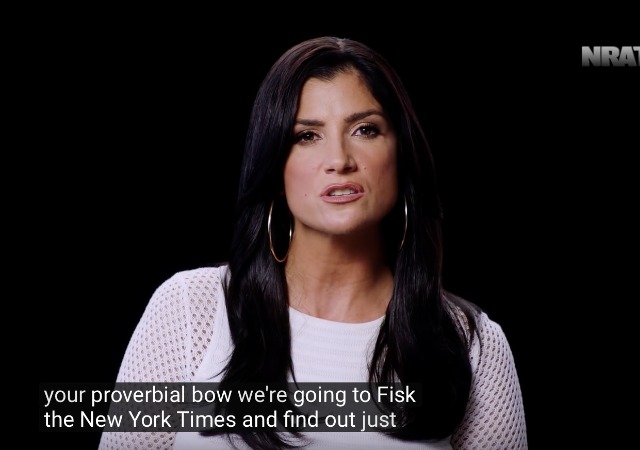 TV host, radio host, and NRA spokeswoman Dana Loesch has once again felt the wrath of leftists over an NRA video thanks to a few scumbag journalists who purposely twisted her words.

In the video, released back in April, Loesch calls out The New York Times for the publication’s lies and fake news. Pathetic leftist journalists freaked out over ONE word in the almost four minute video. They insisted she said that “we’re going to fist the New York Times” instead of FISK.

Claiming that Dana used a sexual term led to a lot of Twitter users threatening her with sexual violence.

The NRA tweeted out the FISK portion on Thursday:

.@DLoesch has a message for the @nytimes: “We're coming for you.” One
non-#fakenews story is not enough. #NRA #ClenchedFistofTruth pic.twitter.com/Hm1QkJi5Tp 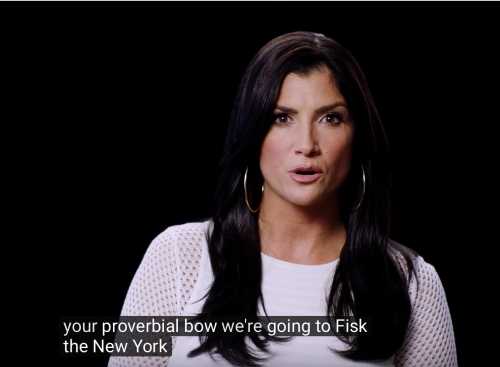 1.
(slang) to refute or criticize (a journalistic article or blog) point by point 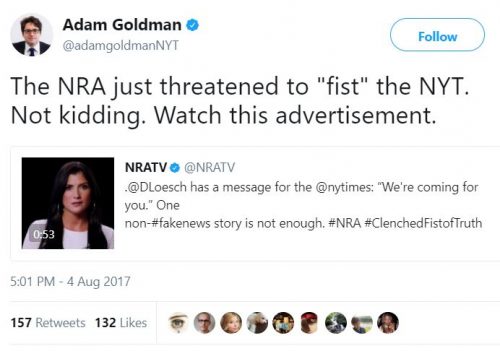 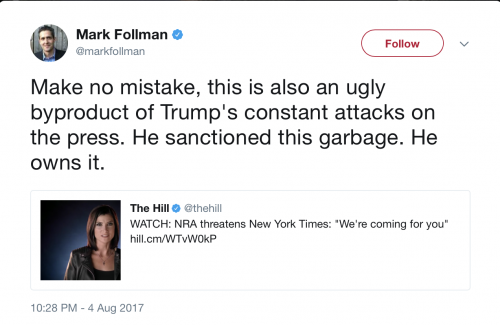 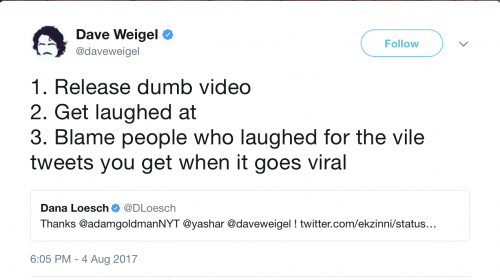 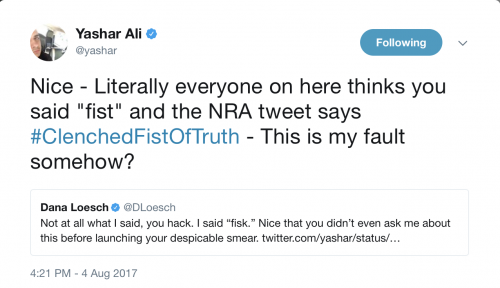 Oh to make it even more precious, they started to blame the HASHTAG! The NRA used the #ClenchedFistofTruth hashtag, which goes with another video Loesch hosted. She received a smear campaign over that one, too.

But instead of admitting fault, they BLAME THE HASHTAG like Parker Malloy at Upworthy: 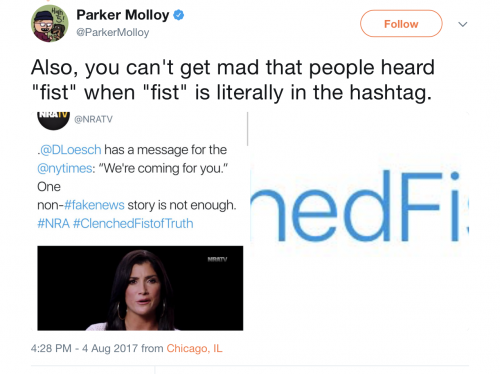 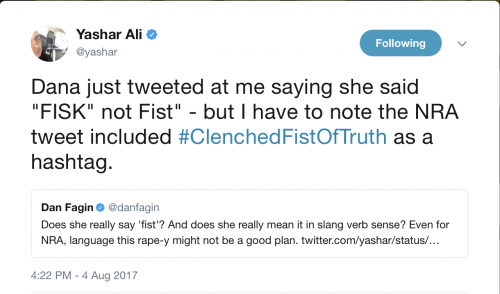 Wait. It gets better. Then they blame Dana for using a word that isn’t used as much anymore!! 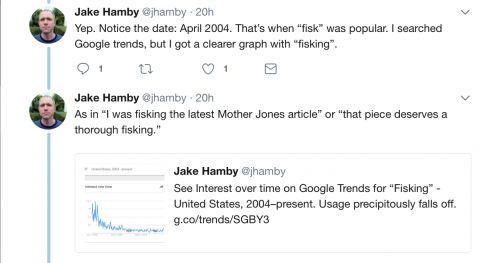 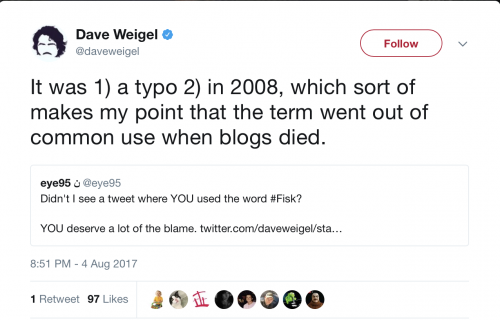 Dana laughed at the ridiculous argument: 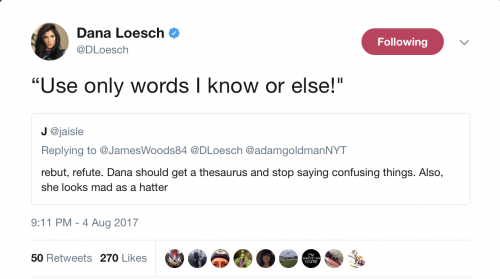 So of course these people, who have numerous followers on Twitter, spread this lie and led to Dana receiving tons of threats: 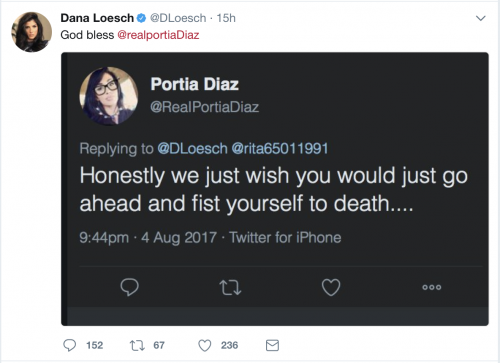 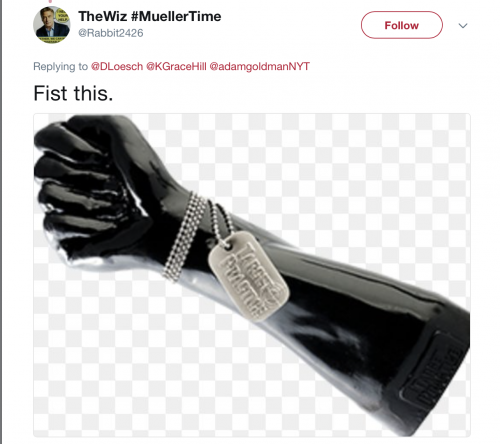 Then they blame Dana for using a word that isn’t used as much anymore!!

Oh, c’mon! There are lots perfectly good words that you don’t hear much anymore.

For instance- ‘Democrat election victory’. When was the last time you heard that!

Not sure I would use ‘Democrat election victory’ as an example of perfectly good words
But point taken.

I’d be happy to let someone like Dana fisk my polemic. I’ll even offer her a rejoinder.

Well, in that case, assume the prose position. 😉

And what if she had said “fist”, referring to the “fist of truth” from the 1st video the Left cried about?

Stop playing the game on their turf. Take it to them. Call them neurotic, moronic children, which is what they are.

They’re worse: they are ignoramuses of enormous proportions:
https://www.dailykos.com/

Giving the NYT the fist means beating the s**t our of those progressive fascists.

That’s why we say “pay tribute” to the dead, instead of “pay our respects.”

It’s why we “breed,” instead of “procreate” or “have babies.”

I thought they Loved the alternative-sex-practices people!!!

She used the word fisk to be edgy and provocative.End of story!

So, someone used Twitter to say something stupid. Got it. In other news, water is wet.

Tell that to our trolls.

Though they’ll have to check their daily ‘what to think’ email from crazy pelosi first.

Aren’t these the same people that referred to Tea Party activists as teabaggers, knowing full well the sexual innuendo implied with the term. Loesch should now double down and say that was exactly what she meant, so what!

The masks have been ripped off, revealing that the left is composed of nothing but hate. Which is, of course, not surprising to anyone who knows the history of the left in America (see: KKK).

This only shows that the NYT are ill-educated hicks, trapped in their parochial bubble.

“Fisk” is a word invented by, and only ever used on, the right side of the blogosphere. Leftists wouldn’t be aware of it, and certainly wouldn’t use it, because that would involve acknowledging that Robert Fisk is not the fountain of truth they pretend he is. Just as they will never use, or even be aware of the use of “swiftboat” to mean “tell an unpleasant truth about someone when the whole world seems to insist it can’t be true”.

In other words, old robert’s been Fiskboated.

As I said, “parochial bubble.” For example, I know what the terms “woke” and “jingoistic” mean even though I’m not a leftist. Our side knows what the left thinks, but the reverse isn’t true.

They are demonstrably inferior to us.

They know exactly what she said, they just want to pretend it was violent to justify their fantasy violence directed at her. In a small way, their need to set up a false narrative shows they have some shame, its tiny but there.

I just wish this cold war would turn hot so I can get to lighting them all on fire. I

As a 65 YO man I have become accustomed over the years to hearing the lies, fabricated hysteria, purposely misinterpreted words, and so forth, from both sides. It would seem that starting about the time of Trump winning the nomination, the Left has gone absolutely overboard and stupid with this. Never before have I seen such vile hysteria and over-the-top lies spoken so frequently or with such consistent vigor. It is as though the Left is trying to drive people away from their own party as their loyal members try to outdo each other for the most outrageous claim. It has become the party of the absurd participating in the theater of the absurd.

Go get them Dana! One more meltdown from the insane left.

What I wasn’t aware of was that blogs had ‘died’. I must read a lot of zombies.

The Inquirer needs to buy the NYT and make a better paper out of it. There will be a bigger demand for copies of the Inquirer now that OJ is free to search for the “real killer” on various golf courses

I have my doubts they’d be brave enough to come at Dana. And I’m pretty sure they’d not like the results.