“We will pay our debts and we will make the debt limit.” 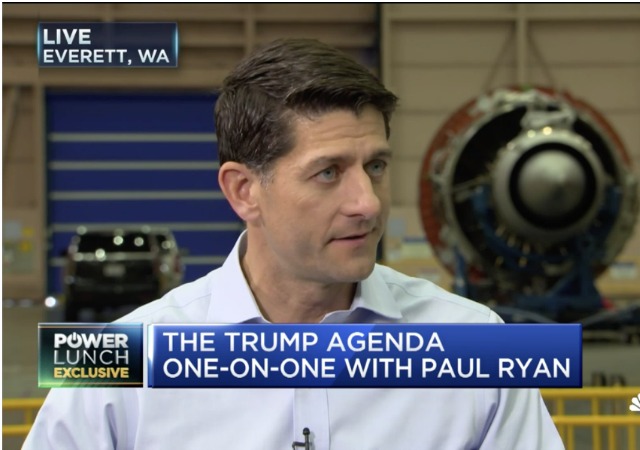 Speaker of the House Paul Ryan (R-WI) spoke to CNBC today about financial situations that Congress will face once lawmakers return from their recess.

In the interview, Ryan expressed the same views on the debt ceiling as Senate Majority Leader Mitch McConnell (R-KY):

the Wisconsin Republican told CNBC from a Boeing factory in Washington state, where he was promoting tax reform.

“I’m really not worried about getting this done because I know we will get this done and we will pass the increase before we hit the debt limit,” he added.

Paul Ryan: We will pass a debt limit increase in time from CNBC.

It’s very important to remember this is about paying our debts, not adding more debt as Mnuchin has said:

“I know people have talked about this concept of prioritization,” Mnuchin said. “This is not about any of the debts should get paid, but not other debts,” he said, adding: “This is about having a clean debt ceiling so that we can maintain the best credit, the reserve currency, and be focused on what we should be focusing on — so many other really important issues for the economy.”

Mnuchin has also asked for a clean hike in the debt ceiling, which means no strings attached. Quite a few Republicans have asked for spending cuts to go with a debt ceiling hike.

Ryan told CNBC that Congress has “a bunch of different options in front of us.” In other words, he wouldn’t elaborate on how he would get it done.

In a series of tweets, President Donald Trump stated he wanted the debt ceiling legislation tied into the VA bill that he just passed. Ryan confirmed that’s one option Congress can take.

Ryan also said that Congress will miss the deadline of September 30 for spending bills mainly because the Senate will have to spend its time confirming federal officials. The government will have to live on stop gap bills for months. From The Washington Times:

He acknowledged a packed schedule coming up when Congress returns to Washington in September, with just weeks to go before the beginning of the new fiscal year on Oct. 1.

He said that schedule is one reason why they’ll need to pass a short-term bill, saying that the Senate has too much work backed up to be able to get a full-year funding bill done in time.

Instead, they’ll turn to a stop-gap bill, as Congress has done repeatedly in recent years, limping to future deadlines.

It’s very important to remember this is about paying our debts, not adding more debt as Mnuchin has said:

Um, that’s worded as if you are endorsing Mnuchin’s obvious lie. Surely you’re not.

What lie? The debt ceiling is about paying off the debt…hence the word debt.

No, Mary. The “debt ceiling” is about limiting our debt.

When you RAISE the ceiling, OF COURSE you are raising the debt. And, yes, we are paying off our current debts with MORE debt.

Please tell me this is not outside your kin.

Raising the debt ceiling is a fictitious solution for meeting all debts, whether they’re old debts which have already been financed for years, or new debts which have been added in the past few months. A dollar of debt isn’t smart enough to know if it’s an old debt or new one. In either case it’s money which has to be paid and which the government can’t afford to pay. Hence, more debt.

There are very few problems which one can solve by making the problem even worse.

This is a fancy way of saying that investors (i.e., bond buyers) will be reassured that the US will continue to amass debt without end, with no second thoughts about it (which is what he means by “clean”). Thus buyers won’t be left holding bad bonds … until the whole system collapses. But short of collapse, the Federal government will do nothing to slow its race down the debt hole. This makes government bonds good investments, which is what “best credit” means—the US will do nothing to impede its money hemorrhage.

For investors, this is good (at least up to the point of disaster, which they are all planning to be clever enough to spot in time to get out). For everybody else, it’s … not so good.

What lie? The debt ceiling is about paying off the debt…hence the word debt.

You can’t possibly be that stupid. The debt ceiling is the maximum that Congress has authorized the treasury to borrow on its behalf. Hence the word ceiling. Paying off debt moves the total away from the ceiling; obviously that would not require it to be raised. On the contrary, if we were truly and permanently lowering the debt we could lower the ceiling if we liked. The only possible reason the ceiling can need raising is to add more debt.

Actually, no, it isn’t in the constitution to pay off our debt. But of course we pay it because we should. However what has that got to do with raising the debt ceiling? Mnuchin’s statement is an obvious lie, since he’s not stupid enough to actually believe it. Raising the ceiling is only about adding more debt, and not in any way about paying it.

I assumed that when you repeated his words you thought you were being ironic, but had inadvertently worded it in a way that sounded like you were endorsing it. That’s why I commented as I did, to alert you to the poor wording. If you really intended to endorse the lie, then I don’t know what to say.

If you actually read my previous articles on this, you’d see that I have said the best solution is to stop spending instead of accusing me I don’t know what I’m talking about. Fact is, spending won’t stop and the biggest programs that go towards our debt won’t go away so you have to go the best possible way and do this so our credit rating doesn’t take a hit,

How does this justify the claim that raising the maximum debt is about paying our debts, not adding more debt?

Go read your 14th Amendment. You also realize that you’re expanding this. This is about RIGHT NOW. Not the future. RIGHT. NOW. It’s about paying off the debt. The subject is about the debt RIGHT NOW.

Forget it. I’m not going into a conversation about the future or anything when we’re talking about RIGHT NOW. But whatever. As much as I want the government to stop spending, or more specifically, go away, it will never happen. Instead I’ll let them pay off our debt.

Again, raising the ceiling is explicitly about adding to the debt, not paying it off. Whether it’s a good or a bad idea isn’t the issue. The issue is that only an idiot or a liar can claim that it’s “about paying our debts, not adding more debt”.

And no, the fourteenth amendment does not require paying the debt. I’ve got the text right in front of me and there’s not a word about that. All it says is that the validity of the Union’s debt shall not be questioned, but that anyone who was owed money by the Confederacy can go to Hell. How do you get from “you may not question its validity” to “you must pay it”? 0bama and his propagandists tried that lie once already, playing on people’s ignorance; I thought you were smart enough to see through it.

The only way to reduce your debt, ethically, is to reduce your other expenditures in order to apply part of your current income to debt reduction. And, this is anathema to politicians. They have to keep the money flowing to all of their special interests and that requires borrowing more money.

I sometimes wonder if the GOPe is so out of touch that they don’t realize they’re going to get massacred in the 2018 elections.

No one ever gets massacred for spending other peoples money. They, congress, either R or D led, have been doing this with one notable exception for decades.

What a load. Hardly unexpected, though.

saying that the Senate has too much work backed up to be able to get a full-year funding bill done in time.

Easily solved; stop dragging their feet pretending that they’ll block Trump’s appointments. Just approve them and then wallow in all that new-found free time.

The Republican Congress sucks, but they can be counted on to spend more money. This will pass.

A “packed schedule” facing them when they return from yet another vacation in September with an Oct.1 fiscal year deadline? This is my surprised face.

Of course, had they not wasted so many weeks and months doing little beyond expressing disdain at us deplorables and slow-walking anything that came from the President, they could have gotten some things accomplished and the schedule need not be so packed.

But then, I sometimes believe in several impossible things before breakfast.

Ryan is useful as a purgative.

The government will have to live on stop gap bills for months.

Been doing it for decades now, they’ve plenty of expertise.

What is Paul Ryan worried about? Anything? Feel like doing any heavy lifting this year? Next year? How about this – just keep kicking cans. All of them. You’re awesome at that. Stick to what you know.

(R) party is led by idiots.

“[W]e will get this done” says Paul, before making sure the insurance industry is bailed out to cover Obamacare losses.
Gee, thanks Paul.

Once people actually remember who the Establishment politicians work for, their position on increasing the US debt makes perfect sense.

These elected officials do NOT work for their constituents, the common people of this country. They work for Establishment special interests, who pay them incredible amounts of money. These special interests rely upon the Congress to funnel taxpayer dollars into their coffers. To continue to do that, and even increase it, the US government has to continue to go deeper into debt. And, debt means simply borrowing money, usually via bonds, which pay dividends to the bond holders. And, the Wall Street banks, and other financial entities, usually buy these bonds.

As we all know, the borrower loses unless the money that he borrows can be converted into capital which will generate a profit. As the government is not in the profit making business, borrowing money, especially large sums of money, which its operations are totally unable to repay, means that the taxpayers are on the hook for all of this debt. And, for what? So that politicians and financiers can get rich on our dime.