He also said that Congress will “get the job done in conjunction with the secretary of Treasury.” 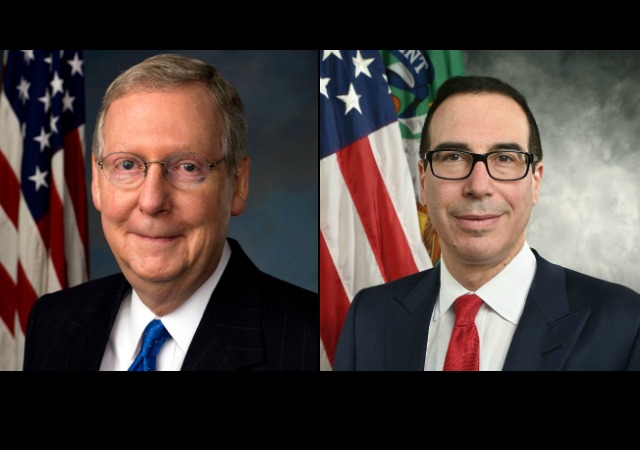 While everyone is talking about statues or President Donald Trump taking a glance at the eclipse, America has some serious issues to address once Congress returns from its recess. This includes the debt ceiling.

Last month, Treasury Secretary Steven Mnuchin urged Congress to raise the debt ceiling to prevent the government from running out of money to pay its bills.

Senate Majority Leader Mitch McConnell (R-KY) provided some comfort to Mnuchin by assuring him there’s a “zero chance” Congress will not raise the debt ceiling.

Mnuchin and McConnell both spoke at an event at a Chamber of Commerce event in Louisville, KY, where both brought up the debt ceiling. The Wall Street Journal reported:

Mr. McConnell expressed confidence in Congress’s ability to avoid missing federal payments in advance of a legislative sprint in September that will also address expiring government funding and several other pressing items.

“There is zero chance, no chance we won’t raise the debt ceiling,” he said at an event in his hometown, Louisville, Ky., with Treasury Secretary Steven Mnuchin.

McConnell promised that the country will not “default” and that Congress will “get the job done in conjunction with the secretary of Treasury.”

Mnuchin reiterated that he will run out of authority to stay under the limit late next month and his priority when Congress returns in early September is ensuring it’s lifted.

“The first thing I look forward to working with the leader in Congress on is raising the debt limit,” Mnuchin said. “As I have indicated prior to this, come the end of September, my magic, super Treasury powers will run out, and we need to raise the debt limit. And it is my strong preference that there is a clean raise of the debt limit.”

Mnuchin’s “magic, super Treasury powers” are certain “cash-conservation measures” the treasury has used “since March, when the previous suspension of the debt limit expired and the new ceiling was set at nearly $20 trillion.”

Now, when most people hear debt ceiling they immediately think of spending. A few conservatives in the House have told Mnuchin they will vote to raise the debt ceiling if it comes with spending cuts.

Mnuchin reminded them that this is about paying our debt, not adding more debt:

“I know people have talked about this concept of prioritization,” Mnuchin said. “This is not about any of the debts should get paid, but not other debts,” he said, adding: “This is about having a clean debt ceiling so that we can maintain the best credit, the reserve currency, and be focused on what we should be focusing on — so many other really important issues for the economy.”

Laugh line:
“… this is about paying our debt, not adding more debt”

Mitch, if you can’t try, say, cutting spending, you should step down from the Senate entirely.

*I know spending bills have to originate in the house. But something tells me a debt ceiling bill counts in that cetegory, and should be ammended to “no increase in debt ceiling, these wasteful agencies cut 100%”

Any bets that T-rump will NOT sign whatever crosses his desk here?

Thought there would be none. You know Der Donald too well, though you retain your suckage.

We are literally drowning in debt, up to our eyeballs. Instead of pumping out the wastewater, Congress keeps throwing a stepping stool into the quagmire for us to stand on. We have all the previous stepping stools stacked on top of each other. They allow us to get a little air while they continue to dump waste water in.

Democrats were guilty of it and since 2012 Republicans have also been guilty of it. I say Trump lets us default and refuses to sign any budget from the RINOs unless it actually cuts spending.

Yay! More debt!
That’s EXACTLY what I want to hear from my “conservative” leadership!

Congress should Levy a 10 million dollar tax on every confederate memorial removal.

$10M would be a penalty, not a tax, and would therefore violate the first amendment.

Not a problem; we’ll call it a “user fee” instead.

Who benefits from increasing the national debt? Answer that question and you can see exactly who holds the strings on McConnell and all of the other GOPe, as well as Dem, politicians.

Not a problem; we’ll call it a “user fee” instead.