“What surprised me the most is that people would think that a promise to fact check a media organization is a physical threat, which it’s not.” 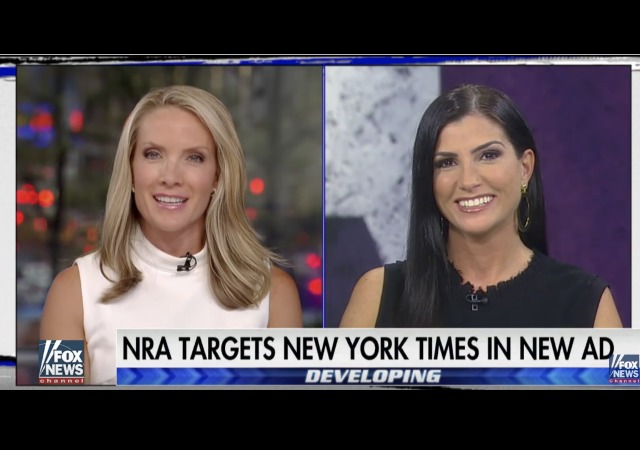 Over the weekend, radio host, TV host, and NRA spokeswoman Dana Loesch faced immense backlash over an NRA ad that she taped months ago. Journalists claimed that she said fist, which has a sexual connotation for some, instead of fisk The New York Times for lies and misinformation.

Loesch appeared on “The Story” on Fox News to discuss the abuse she faced and couldn’t understand why everyone would get so upset over her wanting to fact check The Times.

CNN contributor Mark Hertling even reported the ad to Twitter!

This is the 5th “ad” from @NRATV & they are increasingly shocking and hateful, threatening Americans and institutions. I’ve reported them. https://t.co/qy0dcMLrti

Dana and I had a back and forth with him over censorship. We could not grasp why someone would interpret the ad as a threat worthy of reporting to Twitter. 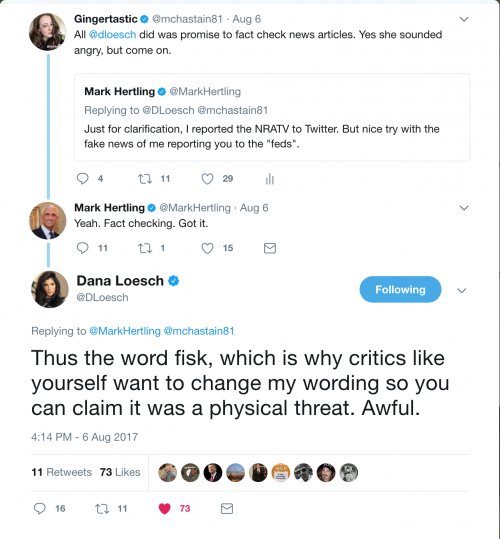 Which led me to say this:

So tonight Dana spoke with Dana Perino who filed in to host the show about these remarks leftists flung at her:

DANA LOESCH: What surprised me the most is that people would think that a promise to fact check a media organization is a physical threat, which it’s not.

Host Dana Perino asked Loesch the ultimate goal in these series of videos and the goal to push back against The New York Times.

LOESCH: With this particular ad campaign, Dana, the whole point is to show the media and announce to the press that the free people also have the right to criticize and fact check the press. That’s why I use the word fisk because apparently The New York Times was completely unaware of a free people have the right to fact check the press, particularly when this is the press that has falsely maligned so many people for so long.

Think of, this Jim Routenberg just last year in a column had written that The New York Times doesn’t have to objectively cover the president because they don’t like the way that he talks.

So they already kind of admitted that they have been misleading and that they have been practicing bias. That’s what people are tired of. I think a lot of the bias has really gone to push people back into their little corners and has contributed to a lot of the political tribalism that we see here. It’s just not conservatives that are affected. Liberals are affected, too.

I found evidence in our past blogs that backup Dana’s remarks. Four days after the election, Professor Jacobson blogged about how people in the media noticed the obvious bias in The New York Times during the election, which included Mark Halperin of Bloomberg News and Joe Scarborough:

JOE: This shows that the editors of the New York Times–I have the greatest respect for. They don’t get it.

Then the professor published the sorry-not-sorry apology from the Times and an internal memo that promised the publication would be fair to President Donald Trump.

Then a few weeks later, The New York Times public editor Liz Spayd penned an op-ed directed at the publication: DROP THE BIAS. Her office received “five times the normal level” of complaints “and the pace has only just recently tapered off.” I blogged:

Spayd has spent a lot of time on the phone with subscribers around the country, hearing their complaints of the obvious bias towards Hillary Clinton over Bernie Sanders and President-elect Donald Trump.

Cindy Capwell wrote to Spayd that The Times coverage tainted Trump supporters as racists, sexists, and homophobes by concentrating “on Trump’s most extreme supporters.”

It really is no wonder why polls had Hillary winning. The Times and other media outlets that should remain non-biased often portrayed all Trump supporters this way so many of them never spoke up about their support of Trump.

Spayd’s op-ed shows that Dana was right when she said liberals are affected as well:

Few could deny that if Trump’s more moderate supporters are feeling bruised right now, the blame lies partly with their candidate and his penchant for inflammatory rhetoric. But the media is at fault too, for turning his remarks into a grim caricature that it applied to those who backed him. What struck me is how many liberal voters I spoke with felt so, too. They were Clinton backers, but, they want a news source that fairly covers people across the spectrum.

WHAT struck me most as I spoke with readers is how much, to a person, they had something to say that was smart and reasonable. They weren’t randomly selected — I chose them from an inbox of complaints — but they had reactions that were well worth hearing. I found myself wishing someone from the newsroom was on the line with me, especially to hear how many of the more liberal voters wanted more balanced coverage. Not an echo chamber of liberal intellectualism, but an honest reflection of reality.

Seems I recall Dana being slimmed, along with a bunch of other conservative women, for siding against Lawdalouski.

She’s a tough cookie who won’t back down, and she knows what it costs to insist on #realism.

Normally, I’d just tell you to perform a Scaramucci on yourself, but this is too fun…!!!

I hope the NYT and the rest of the left holds their breath until Dana Loesch backs down.

Dana, like so many women on the right, feels the heat from the so-called “women’s” party for the crime of not marching in lock step with them. And as they become ever more radical they are alienating many moderate liberals.

I suppose this is the appropriate place to mention this; Dixie Gun Works is offering $255 off their 1861 Springfield Rifles.

I need to meet a nice Jewish girl.