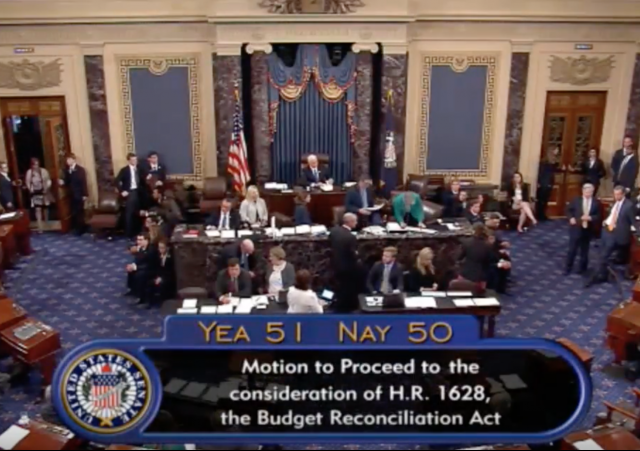 Tuesday afternoon, the Senate will vote on the first step to repealing Obamacare — opening floor debate.

The vote is merely on a motion to proceed (MTP) in order to begin debate on repeal. So far, Senate Republicans haven’t had enough votes to begin floor debate on any variation of health care reform legislation.

Senator Lee (R-UT) made a last minute decision to vote to begin debate, leaving Sens Murkowski and Collins as the motion’s only Republican dissenters:

MTP passes with Lee, who was said to be undecided 15 min ago, voting AYE and Collins and Murkowski voting NO

With 50 Republican Senators voting for the MTP, Vice President Pence broke the tie, and thus debate will begin. But it’s a long way from debate to passage, so Republicans still have their work cut out for them, regardless, it’s a good first step.

As for the Democrats, this is not likely to bode well in midterms, where Obamacare and its repeal continues to be a huge issue for voters.

Heitkamp and Manchin are both nays btw. As were Donnelly, McCaskill, and Tester — the 5 Dems in the Trumpiest states. All 48 Ds vote no.

Monday, President Trump called on Republican Senators to make good on their promise to the American people to repeal Obamacare. “The American people have waited long enough, there’s been enough talk and no action, now is the time for action,” he said.

The White House released the following statement yesterday, urging Senators to support the ACHA and the Senate Amendments, the BCRA:

The Administration urges all Senators to support the Motion to Proceed to H.R. 1628, the American Health Care Act of 2017.
For months, the Administration has supported multiple bills that repeal central parts of Obamacare and include replacement provisions, such as market stability funding and an expansion of Health Savings Accounts. These bills include H.R. 1628, the American Health Care Act of 2017, and the Senate amendment to H.R. 1628, the Better Care Reconciliation Act of 2017. Both pieces of legislation fulfill President Trump’s promise to provide relief to Americans suffering from the failures of Obamacare and to transition to a better healthcare system by taking power out of Washington and returning it to the States and to families.

H.R. 3762, the Restoring Americans’ Healthcare Freedom Reconciliation Act, which passed both chambers in 2015, outlines yet another path to providing relief from Obamacare. This bill repeals Obamacare’s damaging individual and employer mandate penalties and its tax increases, while providing a reasonable transition period for the Congress to enact patient-centered healthcare. The Administration supports H.R. 3762 as a first step in a multi-step repeal-and- replace process.

As Obamacare exchanges continue a collapse that began years ago, the Administration firmly believes that inaction on healthcare reform is not an option.

The Administration strongly encourages all Senators to support the Motion to Proceed to H.R. 1628 and to move forward on repealing Obamacare and replacing it with true reforms that expand choice and lower costs.

Arizona’s Senior Senator, John McCain, returned to the Senate in order to cast his vote. Sen. McCain recently underwent brain surgery and was then diagnosed with brain cancer.

But you can listen to us. Because we’re not bombastic:

"Stop listening to the bombastic loudmouths on the radio and the television and the internet," McCain tells colleagues. "To hell with them!"

Affordable and available medical care, where insurance is a safety net rather than a primary financing vehicle.

That doesn’t sound like a market-based reform. I keep saying, the solution to government-run medical care is not more government.

I wish this had an edit. True insurance is indeed only for catastrophic coverage, which is what you’re calling ‘safety net’. Thus, Dental Insurance isn’t really insurance, it’s just a fancy mislabelled savings plan.

Is it really a savings plan though when prices are jacked up 200% and you are thrown a bone to save 50%?

Many years ago I had a good lesson about insurance.

I had dental insurance and had a tooth pulled out. That experience was such a joy that a year or two later I had another pulled out, but this time without insurance.

My cash expenditures for each of these identical procedures? Identical.

Tentative conclusion: My cash cost reflects the market. That’s what I’d use to figure my cost/benefit ratio when deciding whether to have the procedure performed. The insurance costs are part of some fantasy market which actually has little to do with either me or with dentistry.

I too dropped my dental “insurance.” Besides the financial benefits, I now make my own decisions without the “help” of some administrator on the phone or through an estimate or whatever.

Insurance has corrupted healthcare prices to the point where people are billed many times the expected payment amount.

What the world needs is medical savings plus catastrophic coverage.

Insurance is not the only problem in distorting prices. The unfunded mandates of the Emergency Medical Treatment And Active Labor Act (EMTALA) and underfunded mandates and whipsaws of Medicare and Medicaid have a lot to do with pricing distortions. EMTALA requires those that take Care/Aid to deliver services without compensation. Care/Aid set arbitrary prices on reimbursement for devices and products that cost the same in all markets, and reimburse more for services delivered in smaller markets in which the overhead and local labor costs are lower than big markets that receive lower reimbursements. Then there is the certificate of need fiasco at the state level through which providers seek monopoly or oligopoly protection by restraining competition (fighting the issuance of CN’s to competitors and litigating the issuance for years after the fact).

Talking heads that think they know always want to talk about how much med mal litigation is costing the rest of us. But they conveniently omit just how much med mal there really is, with it climbing to the number 3 spot on list of most deaths causes. No one asks how much med mal is costing the rest of us when cases are not filed at all or cases are filed and lost because jurors don’t get it or have built-in biases against litigation and plaintiffs. When people are injured and require a lot more care, someone has to pay for it. So the insurance cos. are passing that cost on to us or the hospitals are if the injured parties no longer have insurance because they cannot work and afford it. Further, no one on the defense side is proposing anything to make the dispute resolution system less complex or expensive for injured patients. If you do not agree, just try to get doctors, nurses, clinics, and hospitals to submit to arbitration on the merits of an injury issue or a fee dispute issue. (I do not do PI or med mal tort work but have tried to get a hospital, several physicians, and the insurers to arbitrate their fees when they screwed up and caused repetition of procedures and billed my client for every one of them despite their obvious errors).

The whole system is a complex mess and fixing it would require asking a lot more hard questions and conducting far more study. As of right now, no one is asking the hard questions or proposing stepping back far enough to really examine the problems inflicted by govt and insurance.

It seems that people are getting the message. With Gorka, Kelly Anne, and now Scaramucci presenting a formidable line of attack dogs to defend the POTUS, maybe enough Republican senators felt the flame licking at their butts? It sure looks like the House Freedom Caucus is finally stepping up to the plate:

I’m guessing that Ryan will step in front of this one but it will cost him dearly next year if he does.

Anyone else feeling the earth is moving under their feet again? Trump made some serious moves in the past 2 weeks and suddenly, Republicans are on offense. Let’s see how long that lasts. I don’t trust “our” side at all.

Sadly, that’s congressional investigations. I’ve never seen anything come of those. These need to be coming from the FBI, and so far, Sessions doesn’t seem the slightest bit interested in tackling government corruption.

Also, Ryan has nothing to fear from this current crop of congresscritters. Even after 3 disastrous years, he still has overwhelming support for speaker, I don’t know why. Thomas Massie was the only house republican to not vote for Ryan to be speaker back in January.

Also, I don’t necessarily agree with your assessment of Ryan being safe from a challenge but he certainly is vulnerable for re-election. Trump is more popular in his district than he is and they are very supportive of the Trump agenda he is blocking despite having campaigned in favor of it.

Every GOP congressman will be running on Trump’s coattails if they want to be re-elected, the same platform platform they were elected on last year. What they do right now means everything. Lots of these guys stand to be successfully challenged.

That may be true but the timing and message is sure to prod Sessions into making a decision. If he isn’t willing to take to the offense after this, he should resign. Enough talk already.

(I don’t know I voted thumbs down this time, I was very careful to only click reply and I only clicked once. Sorry.)

We need a replacement for Ryan, someone who is out in front in the news, explaining to everyone *why* we need lower taxes, *why* less regulation is a good thing, *why* planned parent hood is evil and that we shouldn’t be funding them. This stuff is basic.

I wish the House Freedom Caucus was out finding someone to replace Ryan right now, instead of being caught at the last moment come December, with no message, and no candidate. We need leadership.

That has been my biggest beef with the Freedom Caucus, they can never find anyone willing to challenge Boehner. Jordon, Meadows,…. They always demure. Finding a primary challenger should be much easier.

We need a replacement for Ryan, someone who is out in front in the news, explaining to everyone *why* we need lower taxes, *why* less regulation is a good thing, *why* planned parent hood is evil and that we shouldn’t be funding them.

That would be Mark Meadows. I subscribe to his weekly newsletter and he’s always explaining that stuff.

Well that was a hollow victory. Darth McCain goes to the podium and essentially says he’s not voting for the defunding bill, the defunding bill with more money added or the BCRA. IN fact, he wants the entire bill to be sent back for reconsideration. Without his vote, none of the 3 can pass.

The Fireball Of The Forestal should be cremated and his ashes kept in an urn in a safe location so that the public cannot micturate on his remains. Otherwise, if he buried in a location with public access, his family should be ensure to install scuppers. Otherwise, there will be a lot of standing water.

I’m a little confused on what “other vote” they held following the repeal vote where Pense was the tie breaker. What was this other vote for?

What are they voting on now??!!
I saw that the Senate rejected it.
totally confused on this ordeal.