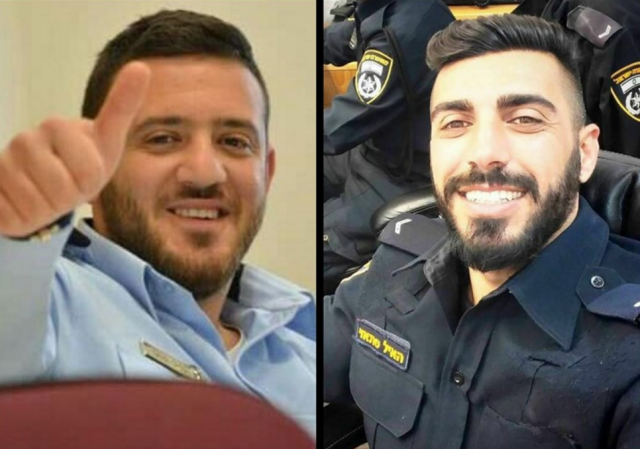 In dramatic video, one of the attackers “played dead” only to rise to try to stab the police. He was shot dead in the act.

The attack at this location was a clear attempt not just at terror, but to stoke wider conflict.

It was the second attack in Jerusalem’s Old City within the past month. An assault a few weeks ago also resulted in the killing of a policewoman. The fact that a second terror attack has now occurred within a span of weeks in Jerusalem’s Old City, and that the attackers were Israeli citizens, will undoubtedly lead to security reassessments.

Recent data seemed to show that the current terror wave, which began in September 2015, was on the wane. But Palestinian incitement that glorifies violence and encourages attacks—especially the relentless dissemination of a wild myth that Jerusalem’s mosques are threatened by Jews and must be defended at all costs—has continued unabated. Incitement on the Temple Mount by an assorted array of hate preachers also remains common, More Temple Mount incitement: “Allah, annihilate all the Jews…enable us to kill them!”

As happened today, the incessant incitement continues to drive young people into Jerusalem’s holy sites to murder and maim.

Instead of condemning murderous #terror attack, Pal incitement & distortion of truth on #socialmedia endangers safety of ppl in the region. pic.twitter.com/KXmmoKB5H8

Early Friday morning (July 14, 2017), three armed terrorists reportedly moved from the holy site of the Temple Mount/Haram al-Sharif to Lion’s Gate where they opened fire on a group of policemen. They then fled to the al-Aqsa mosque on the Temple Mount.

Footage of the shooting attack has now emerged. Warning: some readers may find the graphic footage below disturbing:

The assailants were identified by Israel’s Shin Bet security service as two Israeli 19-year-olds and one Israeli 29-year-old from the Umm el-Fahm village in the north of the country. They used homemade (Carlo) rifles to carry out the attack. 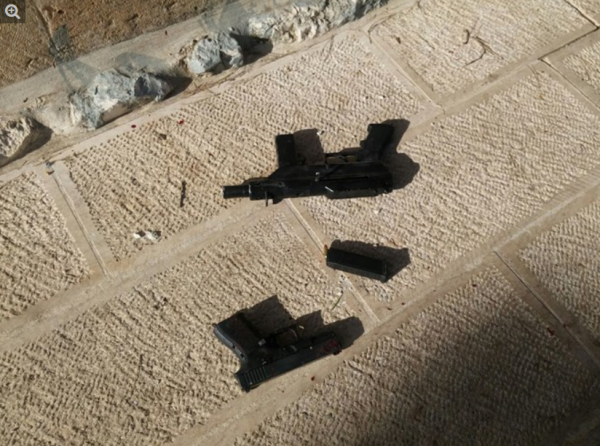 All three were killed at the scene (Israeli media reported that one of them, who was considered to be already neutralized, got up to continue the assault on the officers and was then shot and killed). 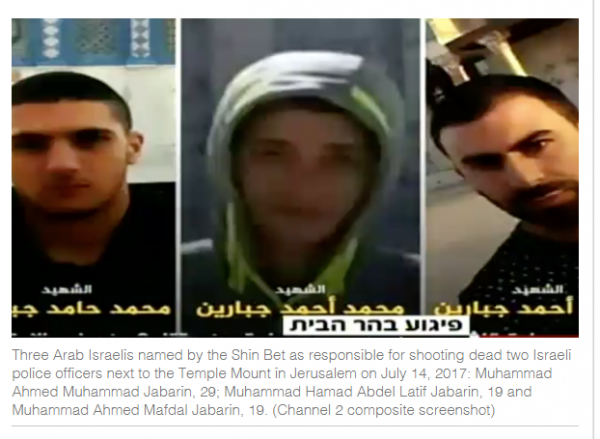 This attack isn’t the first time that Palestinian terrorists have violated the holiness of the al-Aqsa mosque in the act of perpetrating a terror attack or planning for one.

Back in September 2015 we highlighted how Muslim assailants fled there and barricaded themselves into the mosque with homemade explosives, holing up inside in order to avoid arrest. On those occasions, the Israeli police foiled the attacks. Worshippers were then allowed to enter the holy site, Israel Thwarts Planned Attack on Jewish Temple Mount Worshippers.

All Palestinians, Arabs and Muslims should denounce these violations of the al-Aqsa mosque’s sanctity which are routinely turning the sacred site into a battlefield and running roughshod over the religious freedoms of devout Muslims (Israel regularly facilitates tens of thousands of Muslims to pray unimpeded at the Temple Mount on Fridays).

But on those previous occasions, as we noted in our post, instead of condemning the perpetrators, Israel was blamed for carrying out measures to secure the site and the would-be victims—religious Jews who just want the opportunity to visit the most holiest site to Judaism—were chastised for “provoking” Muslims to violence.

Two Israeli police officers were wounded during the exchange of gunfire, and two were killed. 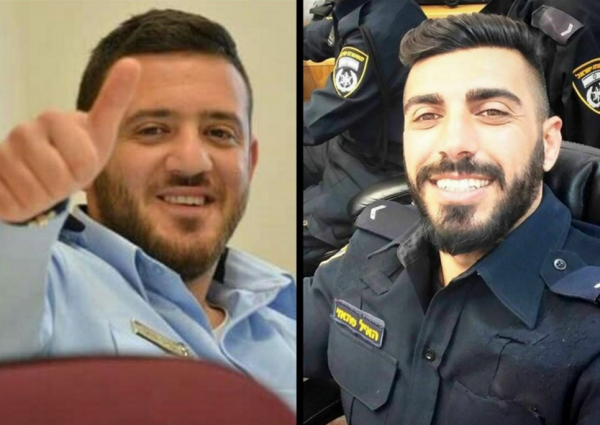 Shanan was recruited into the Israel Police’s Temple Mount unit back in 2012 after signing on as a career officer a few months ago. Tragically, Shenan was due to be engaged next week and Stawi leaves behind his newborn child. 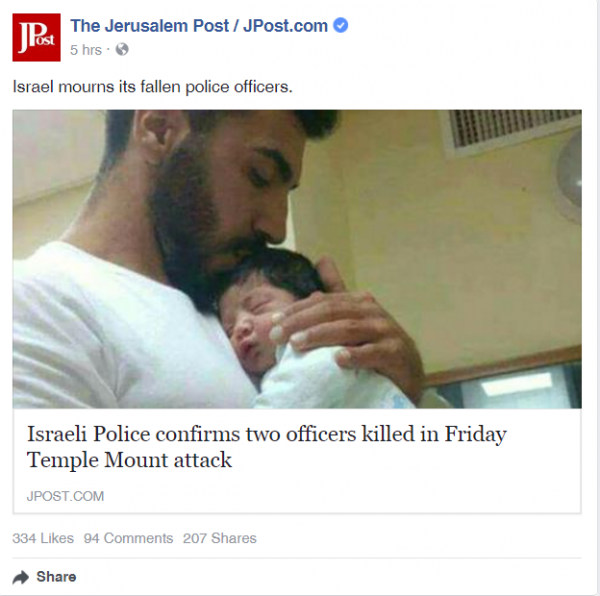 In further details released prior to this post going live, it was revealed that Shanan was the son of former Israeli Druse Knesset member Shakib Shanan (Labor party).

Israeli officials across the political spectrum came together on social media to mourn the losses of the policemen and to send condolences to the families. (However, MKs from Israel’s Arab Joint List reportedly were shamefully silent, releasing no statement).

Total silence from the MKs in the Joint List following this morning's terrorist attack on the Temple Mount by Israeli Arabs.

Education Minister Naftali Bennett said in response to the attack that “The Jewish people are connected in a covenant of life with our Druse brothers.” He also changed his avatar on Twitter to an image of the Israeli and Druse flags.

In a “rare occurrence”, Palestinian Authority President Mahmoud Abbas actually reportedly condemned the attack noting that he rejected “any violent incident by any party, especially in houses of worship.”

But Abbas also unhelpfully expressed his disapproval of Israel’s decision to close the Temple Mount following the attack and is now reportedly trying to get Jordanian officials to reopen it.

Nor did Abbas’s rejection of the violence stop his Fatah party—the dominant political group in the Palestinian Authority and in the West Bank—from denouncing the Temple Mount’s closure today. Taking to social media, it used its official FaceBook page to call on Muslim worshippers to “set out for the al-Aqsa mosque” in defiance of the Israeli police decision:

We call on our people to go to the al-Aqsa Mosque, pray there, and break the Israeli siege that aims to change he historical sites of the holy city and Judaize them.”

Sheiakh Akrama sabari call upon all arab and Muslim to liberate #Jerusalem and Palestine in his Friday Carmen in lion gate . pic.twitter.com/JbJzGbR9Ie

In order to prevent harm to innocents by searching for any remaining weapon caches and to secure a crime scene, Israeli authorities wisely kept the gates to the Old City sealed.

Worshipers congregated in the streets outside it, praying there instead. They looked angry, but it’s an anger that’s unfortunately misdirected toward Israel and its security forces. 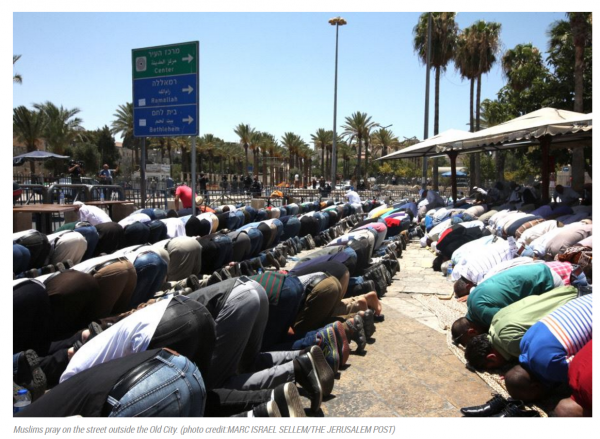 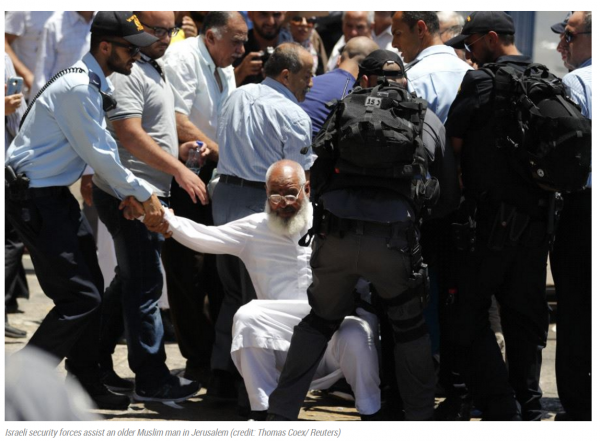 At the time of this writing, it’s unclear whether the Palestinian secular and religious leadership’s response to the attack—blustery condemnations of Israeli “aggression” for closing the Temple Mount and calls to “liberate the city”—will result in an uptick in violence in and around Jerusalem.

No further violence was reported in the Old City on Friday, but an Israeli infant was among three lightly injured when a Molotov cocktail was thrown at a car near the Mount of Olives, just hours after the Temple Mount shooting.

The terror attack today (July 14, 2017) resulted in the closure of the Temple Mount to Muslim worshippers, reportedly the first time that Friday prayers at the al-Aqsa mosque were canceled since 2000.

Police have said that the compound will remain shuttered for an undisclosed amount of time. This makes sense because an investigation into the incident has to be concluded, and searches and sweeps of the area need to be conducted before people can allowed back onto a crime scene. 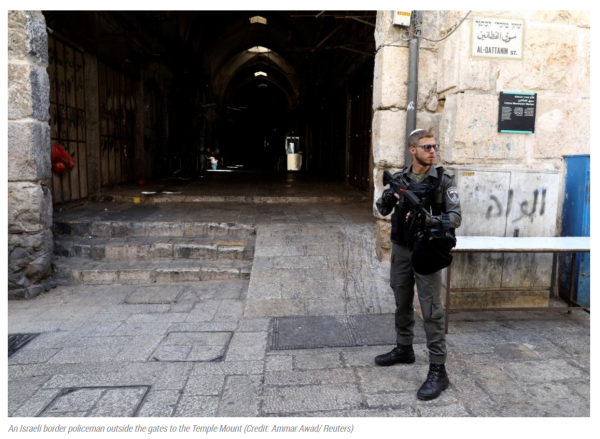 But it has many Palestinians and Arabs worldwide riled up and angry that religious freedoms are being denied.

You can’t get more ironic than that.

As we’ve highlighted in multiple posts, Israel facilitates freedom of religion to devout non-Jews on Jerusalem’s Temple Mount even as Jews are prevented from praying there as a means to avoid provoking Arab and Muslim sensibilities.

This afternoon PM Netanyahu again told PA President Mahmoud Abbas that there would be “no change to the status quo on the Temple Mount”.

He was referring to the five-decades-old bizarre “status quo arrangement” on the Temple Mount. It’s resulted in a wacky situation where Jews are harassed or even thrown off the site, arrested, and barred for long time periods from the place just for bringing in a prayer book, saying the Hebrew name for the sacred site, shedding a tear, or moving their lips in prayer:

In light of today’s terror attack, both Culture Minister Miri Regev and Public Security Minister Gilad Erdan have reportedly suggested a review of the status quo on the Temple Mount as a way to prevent further attacks. 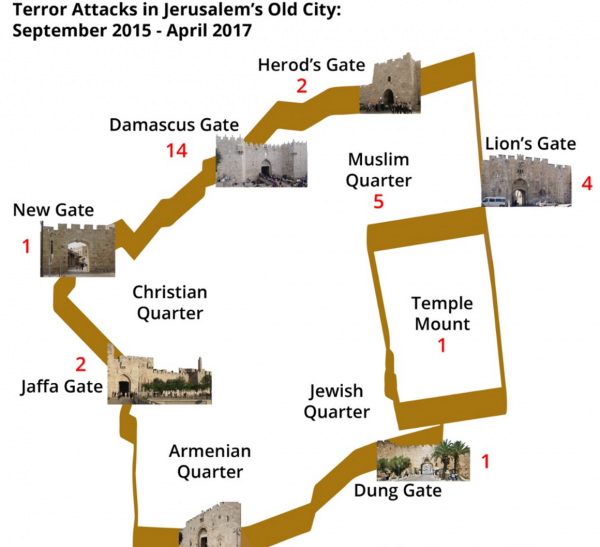 That’s not a bad idea.

The arrangement is supposed to prevent violence. It’s not working out too well.

Israeli police officers Stawi and Shanan were buried today, where they were mourned by thousands of family, friends, and the entire nation. Stawi was reportedly not even meant to be on patrol—he was filling in for a friend.

May their memories be for a blessing.

In 1983 i and my young family visited the Temple Mount with a tour group. At that time, with the exception of areas which were questionable if a Frum Jew may not stand, due to Holy ground, we were able to Pray, take pix etc.

It is crazy that now, we would be harassed instead.
We need to retake authority over the Holy sites including the Cave of the Patriarchs – where the Fathers and Mothers of the Jewish nation are interred.
https://en.wikipedia.org/wiki/Cave_of_the_Patriarchs

how long can this idiocy continue ?

ROPMA. Drop them in Mecca.

Such a Islamic terror crime again on the Temple Mount convinces me that it was a great mistake for Israel to have handed over the Temple Mount to Jordanian Islamic Waqf after the ’67 war as a gesture of peace. The beautiful Dome of the Rock is not even Islamic but was built by the great Arab ruler abd-al Malik, an Arab Christian (of sorts – Jesus not divine) – not a Muslim Caliph – who completed the Dome of the Rock in AD 694. In both its construction style and layout, it is a Byzantine-Syrian church with Roman style pillars and cupola. The Islamic narrative about it is false and even the translations of the beautiful inscriptions inside the dome are false: not done in the Koranic Arabic (of 1924 Cairo) but in Syro-Aramaic.

“Traditionally, these inscriptions, attributed to Malik, the builder of the dome, are read in a way that echoes basic Islamic ideas, despite the fact that even just a quick-but-unbiased look at them would have to raise red flags about this approach. Apparently, for the longest time, nobody bothered to take an unbiased look—until linguist Christoph Luxenberg came along. He translated the inscriptions by reading them in the language that was used at that time—and triggered off a tsunami in the field of Islamic research. By applying the language of Syro-Aramaic that was used by the writer of the inscription, he brought to light interpretations of key messages that differed [a great deal] from the traditional Islamic translations.”

They in fact are about the “messenger of God”, Jesus, not Muhammad!

See Pressburg’s bombshell book ” What the Modern Martyr Should Know: 72 Grapes and not a single virgin” for details an much more you didn’t know because of extremely bad dogmatic Muslim scholarship.