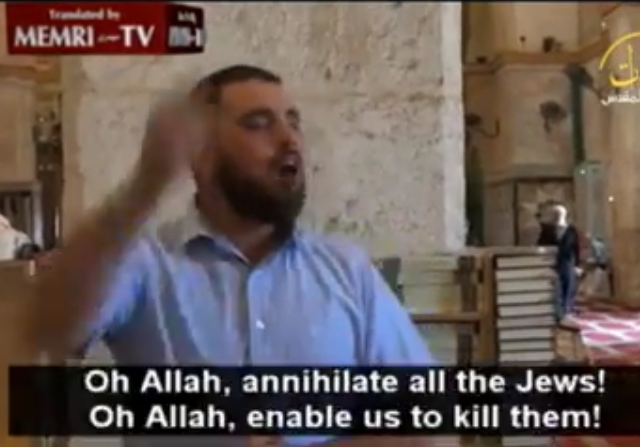 Since 1967 — when Israel liberated the Jewish holy sites in eastern Jerusalem — the Temple Mount has been administered by agreement through the Islamic Waqf, a Jordanian-funded trust which oversees the site’s day-to-day religious functions.

The Temple Mount is the most sacred site in Judaism, sanctified as the place where the Jewish Temples existed in biblical times. It’s a place where Jews should have basic rights, including the freedom of movement and worship.

But as we’ve noted in several prior posts (see here, here, here) because of the profoundly discriminatory “status quo arrangement” set in place in 1967 and subsequently upheld by Israel’s courts, Jews are prohibited from praying there for fear of potentially upsetting Muslim worshippers, stirring up tensions, and triggering violent Muslim backlashes.

Today, Jews can’t enter the compound without being harassed, heckled, and sometimes even physically assaulted.

Jews who violate any of the stringent and frankly bizarre visiting rules and restrictions (e.g., no singing, bowing, sitting, moving lips, or reading from the Bible or the siddur-prayer book) are routinely thrown off the site by Israeli border soldiers and police, who generally concede to the Waqf’s intolerant and absurd demands.

As we highlighted, Israel’s government has begun to crack down on the Muslim incitement at the site. Several Islamist groups (“Temple Mount screamers”) that had been funded by the northern branch of Israel’s Islamic movement to heckle and hound Jewish visitors have now been banned from the site, and the movement itself has been outlawed.

Several clerics who incited violence on the site were also arrested and recently convicted. 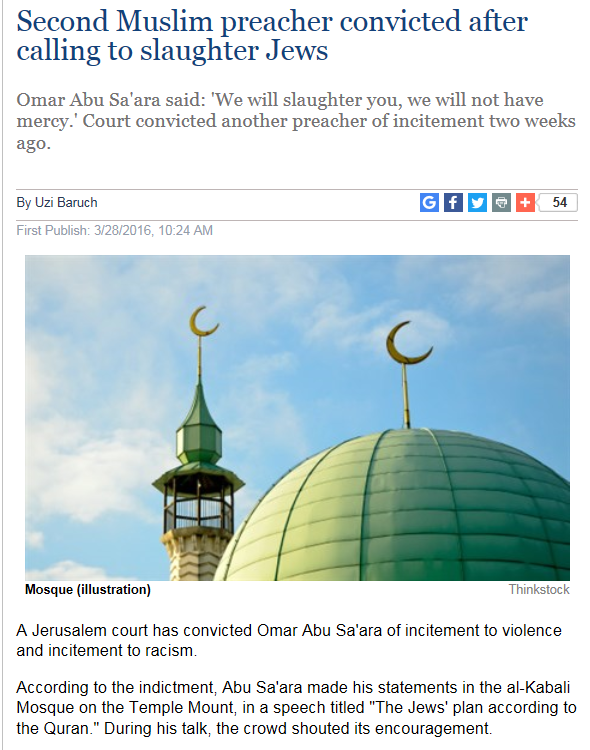 But based on a video clip that surfaced last week, it looks like much more needs to be done because apparently hate-preaching is continuing on Judaism’s holiest site.

Calls to Jihad on the Temple Mount

As seen in the video, this latest affront to the sanctity of the Temple Mount is an impromptu sermon which took place before a sizeable crowd inside the Al Aqsa mosque on May 20th, in the run up to Ramadan. In it, preacher Ali Abu Ahmad explicitly references the holy month.

He can be seen calling for Muslims to rise up to overthrow their governments and impose a Caliphate, or Islamic empire. At the end of his address, Ahmad offers a prayer to Allah to protect Al Aqsa mosque from “Jewish filth” and to “enable us to kill them”.

Basically, the speech is not all that different from those that Hamas and ISIS spokesmen have delivered in recent weeks, urging followers to attack unbelievers in honor of Ramadan (see our earlier post).

He’s used Judaism’s holiest site on multiple occasions as a venue for inciting the murder of Jews. Below is a YouTube clip of his Temple Mount tirade from November 21, 2014. There’s another from October 24, 2015 that can be viewed on the MEMRI website here. 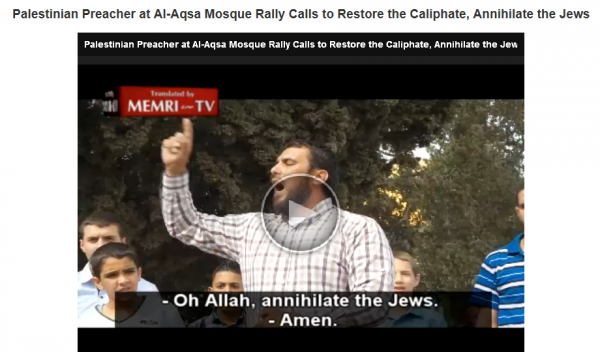 These “spontaneous sermons” are pretty much carbon copies of the one Ahmad delivered a couple of weeks ago. In them, the hate-preacher also calls for the annihilation of “vile Jews” and praises the battle against the infidel. In the one from 2014, he also calls for the destruction of the United States and pledges his allegiance to ISIS.

There are a lot of people listening and milling about him, including kids. No one tries to stop him. Muslim Waqf guards don’t make any effort to shut him down. Based on the video clips, they’re nowhere to be found.

Just to be clear: Al Aqsa security guards—Palestinians mostly from east Jerusalem—are densely deployed at the Temple Mount compound and go to great lengths to ensure that only the smallest number of Jews get to see the place. They are ever-present in large numbers when Jews are touring the site, where they follow the groups around to ensure that no one partakes in any form of prayer or non-Muslim worship, quickly becoming enraged if any Jew dares to utter a bracha (prayer) under her breath. 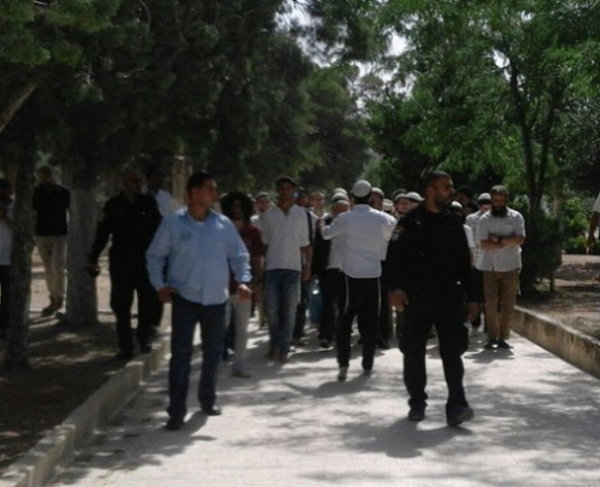 But these Waqf guards go suddenly AWOL when it comes to a Muslim cleric openly spewing violent bigotry and furiously sanctifying jihadist terrorism to large crowds of onlookers. When that happens, they make themselves scarce.

This past Sunday, a group of former Al Aqsa guards reportedly visited Ramallah were they were showered with accolades by Palestinian Authority President Mahmoud Abbas. In his statements, he said that the waqf security personnel “play a great role in defending our holy sites” from the “abusive and violating measures taken by the occupation”.

Calling Al Aqsa a “red line”, Abbas also used the occasion to slam Jewish “attacks and violations” at the Temple Mount compound and said that he wouldn’t “tolerate any infringement” on “the blessed Al Aqsa Mosque”. It’s a disgraceful statement that reiterates the wild and hysterical allegations that he’s often made in the past about Israel trying to “Judaize” the Temple Mount.

Bottom line: Back on May 20th, Palestinian guards on the Temple Mount did absolutely nothing to put a stop to a Palestinian preacher’s sermon, which called on Muslim faithful to kill Jews in honor of Ramadan. He’s a repeat offender, so the Waqf should’ve had an inkling as to the sort of seething anti-Semitic hatred that he was likely to impart. There’s simply no excuse here for the Waqf’s absence and inaction. In light of its abysmal performance, PA President Abbas’ latest incendiary statement heaping praise on Al Aqsa guards, is appalling. Basically, Abbas devoted his speech to congratulating Waqf personnel for “defending” the holy site from Jews who just want a chance to peacefully visit and mumble a blessing at the site that was once the fulcrum of Judaism.

This is today’s reality on Jerusalem’s Temple Mount.

Miriam F. Elman is an associate professor of political science at the Maxwell School of Citizenship & Public Affairs, Syracuse University. She is the co-editor of Jerusalem: Conflict and Cooperation in a Contested City, published by Syracuse University Press. Follow her on Twitter @MiriamElman

Mohammed and his subsequent followers seem a little uptight – what with all the mass murder and beheadings and stuff.

Wonder if he had developed a liking for a good BLT the course of history could have been changed?

Israel should have used artillery to flatten both of those masques in 1967 and told the muslims to take the pieces and rebuild them in Jordan.

Well, if I were to follow the “guidance” from the WH, I would have to admonish anyone who reports this event and his words. Because the religion is one of peace, this person clearly isn’t practicing “true Islam”. And anyone who highlights his words is guilty of causing violent reactions and the deaths an tens if not hundreds of people.

How do I petition to “scrub” his words from the public record??
(pure sarcasm)

Blame it all on Moshe Dayan, who handed control of the Mount back to the Waqf. He had no reason at all to do this; the Arabs were defeated, and assumed as a matter of course that they would lose control of the Jewish holy sites, both in Jerusalem and in Hevron, but Dayan insisted that they come back and take charge again, effectively saying “We Jews have no interest in these places, they’re yours”.

These are the people the Leftist want, now lets remember these same people will behead the Left as well.