“I worked my ass off my entire life to defend women, I didn’t create fake stories and lie about them nor rip people off financially” 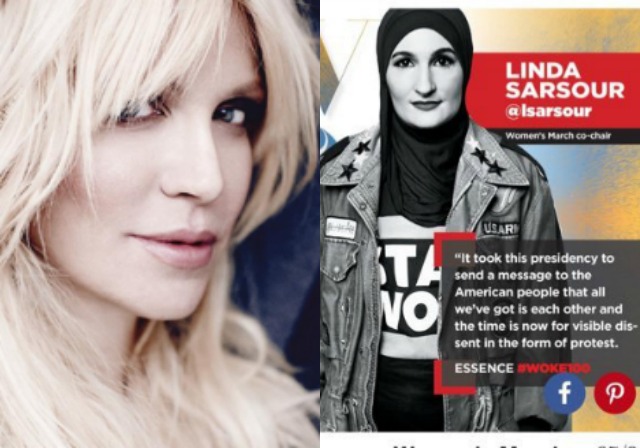 We’ve documented Sarsour‘s history of anti-Zionism, her love of Sharia law, and her attack on Ayaan Hirsi Ali, a victim of female genital mutilation.

Love’s disgust for Sarsour seems to stem from Sarsour’s involvement with a Somali woman named Rahma Warsame. Sarsour, along with CAIR, allege Warsame was violently assaulted by a white man Saturday. They allege the man said, “you all will be shipped back to Africa” before beating Warsame, further claiming the man they believe responsible has a long history of making racially charged statements. Sarsour and CAIR have encouraged the investigation of the incident as a hate crime and are working to raise $100,000 for Warsame.

But that’s not quite what happened, at least not according to the official police report, or a report from the Daily Caller who interviewed two other parties involved in Saturday’s incident.

According to those reports, Warsame was yelling at and beating her son with a shoe when neighbor Samantha Morales stepped in, hoping to defuse the situation:

…Morales said that the saga began after she yelled from her porch at a woman who was screaming at her child and hitting him with a shoe in a common area behind her apartment.

“I went outside. I wasn’t trying to get involved. I just thought the presence of an adult would have stopped her,” Morales says.

But Morales says the woman — who Morales says she does not know — left for a moment and came back angry and threatened to break the windows on her car and apartment. The woman, who Morales says was carrying a stick, then walked near Morales’ car and accused Morales and Boyce of having taken her child.

Morales says she called 911 and explained what had transpired before the threats.

The standoff escalated to violence soon after, Morales says.

“Four or five different men” assaulted Morales before someone used a taser on her, she claims. Then a group of women joined in the assault, both Morales and Boyce said.

It was after the taser was used that Boyce, who was watching from the apartment, says he sprung into action.

Boyce says he’s sure he hit someone in the scuffle but says he can’t be sure that he struck Warsame. He also strongly denies purposely targeting her.

Morales too was taken to the hospital and claims she suffered a concussion. “They’re not even mentioning that I was the victim. They came at me. The woman that’s in the hospital is part of the group that was aggressing me,” she told the Daily Caller.

Even the police report indicated there were so many conflicting stories, it was impossible to nail a singular offender, but one thing seems clear — no one was completely innocent in this incident.

Needless to say, Love was not impressed by Sarsour’s fundraising attempts for a woman who was likely an aggressor in a neighborhood brawl.

You're a vile disgrace to women and all mankind @lsarsour

When Love was asked to remove her tweet, she responded by tweeting the police report which clearly states:

“There is no evidence at this time suggesting the incident involved any type of bias which would constitute the incident being investigated as a hate crime.”

Love went on to call Sarsour a “fraud.”

I worked my ass off my entire life to defend women, I didn't create fake stories and lie about them nor rip people off financially. Linda ????

yea, seems like a publicity stint and perhaps it's been effective for her, but I know a rat when I see one

I'm sorry Linda but I feel you're a fraud and you're inciting anti American rhetoric. I have zero faith in you and your plight. very fishy

Update: @Courtney is denying that Rahma Warsame was brutally assaulted in Columbus, OH. She's using her platform to say it was FAKE story. pic.twitter.com/JOokj4N1Ff

She's collecting money for an incident that never occurred.Blaming the good people of Ohio for a crime that never took place.that's criminal pic.twitter.com/X58eJjhEjH

Thanks @Courtney for clarifying what side u are on. Not the side of justice or u would be demanding accountability 4 brutal assault of Rahma

How many trite, boilerplate platitudes can one possibly fit into a Tweet, you ask? About this many:

Dissent is the highest form of patriotism. I will keep speaking truth to power. You aren't the only one who won't like it. https://t.co/TfryJ0c5UI

Good for Love for calling out these fraudsters.

$80k for a woman who was part of a gang assaulting a neighbor who had tried to stop her from beating her son. Pathetic.

Note to Sarsour and her followers: You just got into a fight with freakin’ Courtney Love, and COURTNEY LOVE came off looking like the sane, reasonable one!!! Do you realize how hard that is to do? Before your pathetic performance today, I would have sworn it was impossible!

The good news I take away from all of this is even flaky types like this C.Love are recognizing the duplicity of this Muslim Sarsour character and her Somali Muslima buddy.

Muslims apparently are so self-centered that they don’t recognize that people are forming opinions about Muslims based on Muslim behaviors. Honest characterizations about Muslims are not, as Muslim apologists claim, coming out of the blue based on unfounded opinion.

For example, do Muslims actually think that their “praying” on Fifth Avenue in front of Trump’s building is going to earn them respect of Americans? This recent antic is nothing more than a show of force.

And force undergirds everything about Islam. Just ask the meat-packing employers who mistakenly have taken Muslims into their workforce.

“I worked my ass off my entire life to defend women, I didn’t create fake stories and lie about them nor rip people off financially”

Those quotes could have come from any of us here. Isn’t it amazing how much we have in common with Courtney Love?

Feminists need to realize that Liberals have thrown them over for Younger, Prettier Victims Groups like Muslims and Transgenders.

Like it or not – Feminists have joined the First Wives Club.

Love also called Sarsour an antisemite, which is so.

Rehab must have worked for Love! 🙂 Good for her for calling out the obvious.

It’s so nice to see the Lefties devour each other.