“She is a defender of Sharia law” 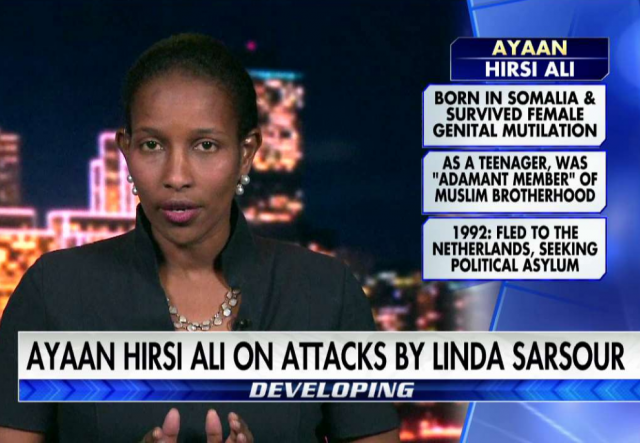 Sarsour posted a positively vile message against Hirsi Ali on Twitter last week in which she suggested Hirsi Ali and Brigitte Gabriel, another outspoken critic of Sharia Law, don’t deserve to be women: “I wish I could take their vaginas away.”

Considering that Ali was a child victim of force female genital mutilation, this was a particularly cruel attack.

Hirsi Ali responded by suggesting Sarsour is a fake feminist. She suggested that Sarsour and other participants of the Women’s March have ignored real crimes against women in the Muslim world citing such examples as the hundreds of girls kidnapped by Boko Haram and the murder of Yazidi women at the hands of Muslim extremists.

Ali, a victim of genital mutilation while living in Somalia, blasted Sarsour as a “fake feminist” who is not interested in universal human rights.

“She is a defender of Sharia law,” Ali said, “No principle degrades and dehumanizes women more than Sharia law.”

Ali said Sarsour hates her and Gabriel because they speak out against Sharia.

She suggested that instead of protesting in Washington, Sarsour should have organized a march for Yazidi women kidnapped by ISIS, “mass rape” incidents in Europe, or Asia Bibi, a Pakistani Christian woman sentenced to death for “blasphemy.”

It’s ironic that American women who enjoy the greatest freedom on Earth would march wearing vagina costumes with Sarsour, who criticizes a victim of female genital mutilation.

All these marches and protests aren’t about the stated cause, they are about undercutting the American process. They are about advancing the leftist (Soros) agenda. And as last night’s protests in Berkely confirm, they are about destroying the US as a nation.

It’s ironic that American women who enjoy the greatest freedom on Earth would march wearing vagina costumes with Sarsour, who criticizes a victim of female genital mutilation.

Unfortunately, that level of irony is so far above their heads they can’t see the contrail.

Aayan Hirsi Ali has already had part of her reproductive tract taken from her, and now Sarsour wants to take the rest?

True colors show through, even when you wish they didn’t.

Aayan got her point across but sure seem Martha couldn’t get her off fast enough…. don’t let the truth seep out.

Precisely. That has always been the goal of the cultural Marxists ever since the members of the Frankfurt School arrived here to escape the rise of Hitler (as Jews and Communists they had two strikes against them). Don’t let the truth get out. Instead convince their students that America is the worst place on earth. That’s why they created critical theory. I suppose you could say it’s called critical theory because the whole point is to just criticize, but it’s actually critical in importance to their larger goal. When they were dismayed that the proletariat didn’t rise up against the bourgeoisie after the devastation of WWI they had an epiphany. The proletariat didn’t hate the capitalists. They liked the economic benefits of capitalism.

So they had to recast the terms of the class struggle, from using economic terms to using cultural terms. That’s what made their theory critical. It’s what led to the rise of the race, ethic, gender, and gender confusion studies department. They were the proletariat now. And white straight men were the bourgeoisie. That’s the chief source of he poisonous nonsense permeating the left. It’s why we hear all these calls for whites to “check their privilege” as if it existed. People of certain races, ethnicities, attractions, and of course women have permanent grievances against white men simply because of those attributes. The system must be cast as unfair and oppressive in ways that are in now way sane simply because the founders where white men.

It’s why the left feels free to engage in political violence to shut down conservative (in some sense) speakers such as Ayaan Hirsi Ali and most recently Milo at Berkeley. It’s another gift from the Frankfurt School. Marcuse, sometimes called “the Father of the 1960,” developed the concepts of oppressive tolerance and liberating tolerance. Since he was a marxist, you can already tell that the terms he used as the exact opposite of the truth. Oppressive tolerance is when all points of view are tolerated, as that just allows the oppressors to remain in power. liberating tolerance is when only leftist, revolutionary points of view are tolerated, and the voices of the right are silenced.

Wymym in the US are the most oppressed wymyn on earth because of a phantom rape culture and microaggressions. They can only remain in that delusion as long as they don’t hear the myriad ways that women are oppressed in real rape cultures.

So, again, never let the truth get out.