Regressive leftist hero exposed to be a phony, again, in racist attack on white student who asked about infamous tweet. 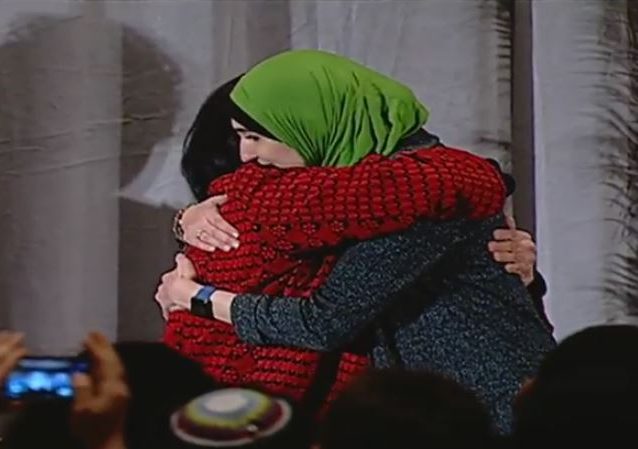 Linda Sarsour has rocketed to progressive fame by expertly playing upon liberals’ need for virtue signaling.

Sarsour talks a good game about everyone getting along, but demands that Zionist women be excluded from the feminist movement and embraced convicted terrorist murderer and immigration fraudster Rasmea Odeh (Featured Image above). She has given speeches at a Farrakhan-sponsored event, and thinks it’s the “definition of courage” for Palestinians to send out little children to throw rocks.

Sarsour is politically two-faced. When she interacts with “progressives,” particularly leftist Jews, she’s all about understanding and respect. When she around other crowds, such a the Louis Farrakan organized 20th anniversary of the Million Man March, she’s tried to tie Israel (i.e., the Jews) to the problems of blacks in America….

When Sarsour was called out on it, she deleted the tweet: 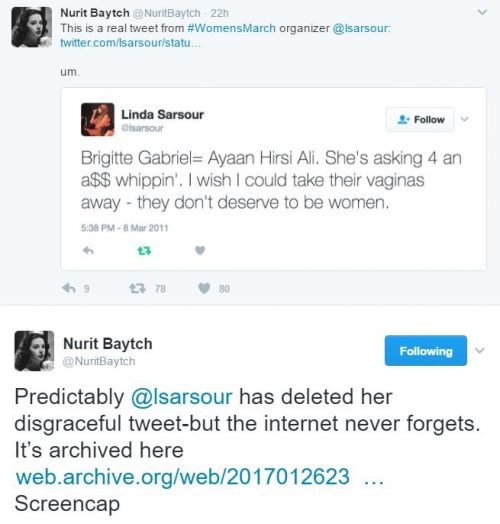 Yet recently, Sarsour suggested it might never have happened.

The video below from CAMERA shows Sarsour race-baiting a white student who raised the issue. Sarsour insisting that a white person had no place to question her at a forum organized by “people of color” in itself showed a side of Sarsour she tries to hide. She deliberately stokes racial animosity as a tactic.

“This question is really important because I believe that women’s rights are human rights,” said the unnamed questioner.

“So I really want to know under what circumstances is it acceptable to say that ‘I wish I could take their vaginas away. They don’t deserve to be women,’” he asked. “Just to give that context that was one of your tweets off your Twitter.”

Following a lengthy pause, Sarsour’s offered a response: “So, let’s give some context here. Because you… we have… This is an event organized by an Asian American, right? Let’s just get some context to what is going on here.”

“Celebrating a community, right?” Sarsour continued. “Talking about communities of color who are being directly impacted at this moment and I have a young white man in the back who is not directly impacted by any of the issues that I mentioned.”

Her evasive response was met with widespread applause from the audience of Dartmouth students.

“A copy and paste that he got from a right-wing blog,” she continued. “He doesn’t even know if it came from my Twitter account because he has a screenshot of it. He never actually went to my Twitter to see if it’s actually there. Right? That never happened.”

But it did come from her Twitter account, as Heat Street pointed out, it’s archived here (and also here). 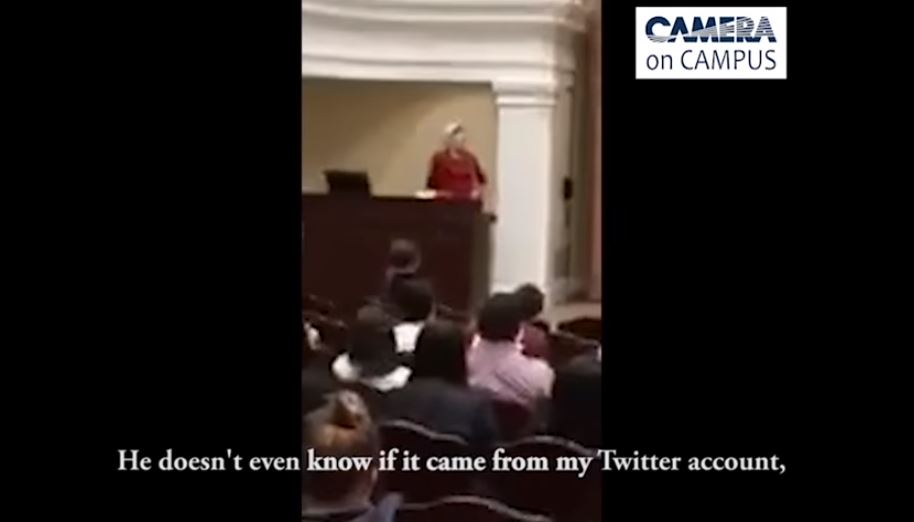 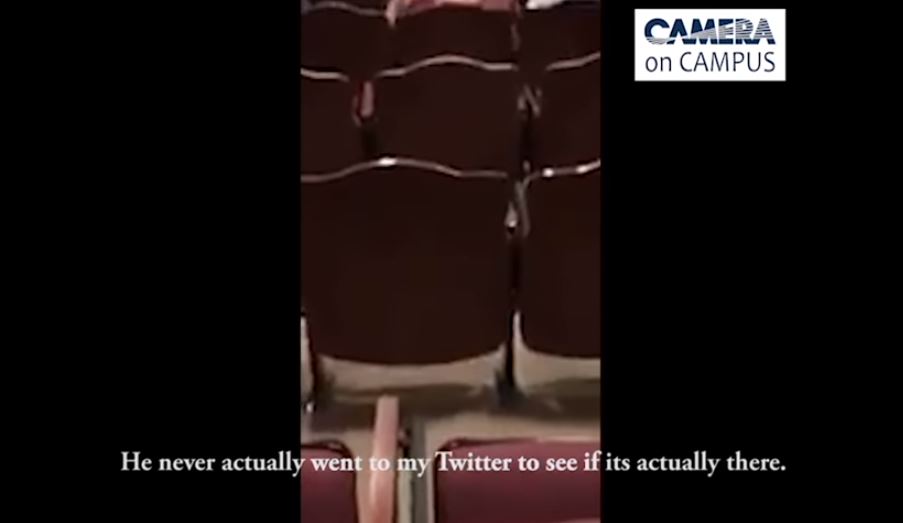 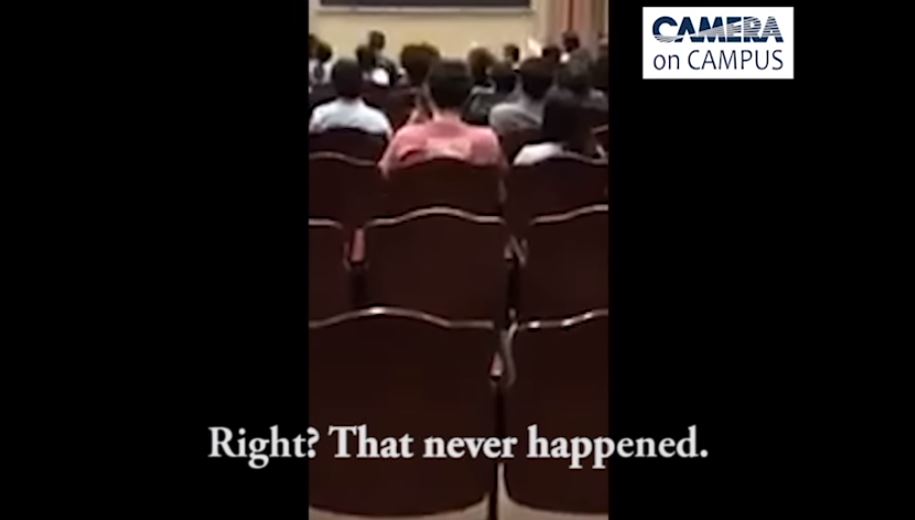 The students in the audience almost certainly thought this was a denial that Sarsour ever sent the tweet given the way in which Sarsour denied that the questioner had proof she sent the tweet.

But it’s a big deal because Linda Sarsour is a rising star in the regressive movement, which seeks to normalize Islamist oppression of women in the name of feminism.

Sarsour’s attack on Ayaan Hirsi Ali is the real Linda Sarsour, as is her race-baiting of the white questioner. The rest is just for show.

Will being caught in this “little” lie damage Sarsour? Unlikely. She’s the Commencement Speaker at the City University of New York graduation this year, so her star is still rising.

…in the regressive movement, which seeks to normalize Islamist oppression of women in the name of feminism.

It’s no wonder progressives are going insane. They have to twist their brains into pretzels to rationalize all the dichotomies inherent in today’s progressive ideology.

This is an extremely rare case where I don’t think your analysis holds. She basically admits late in the video that the tweet happened in 2011. She also asserts “we all say stupid shit”. So, in a roundabout way she admits to saying it but she doesn’t want to be held accountable for it because: 1) she was in her 20s; 2) it happened a long time ago; 3) people say stupid shit when they are in college.

Her “that did not happen” remark seems to be her assertion that the man who read her words back to her did not get them from her Twitter. Obviously, she can’t know where he got the tweet or why it matters. Either they are her words or they are not.

Yes, it’s all evasive. Attacking the questioner’s race for trying to hold her accountable for her own words is repugnant. But I’m not convinced she denied saying them. Nor did she proudly defend them.

Except that it is entirely consistent with her current actions and associations.

Even the identification of a “Palestinian” as a person “of color” is confusing. “Palestinians” include a multitude of ethnic groups residing in the area in late Ottoman years. Many are no more dark-skinned than, say, Sicilians or some Greeks or some of the groups from Lebanon. Just look at the photos in this post of Sarsour and Ayaan Hirsi Ali. Is Sarsour “not white?” Has not Ali, born in Somalia and brutally mutilated, been considerably more “oppressed” in her life than the New York-born Sarsour?

Middle-Easterners are Caucasians when it suits the left’s agenda, POC when THAT suits their agenda.

And thus the “virtue signaling” to cover for the inevitable insanity that is Leftism. Trouble is, there is a complete lack of virtue.

The commencement speech won’t matter much. At City University of New York, they’ll cheer and cheer, but don’t ask what grade level they read at!

PLEASE help us protest and prevent her from being the speaker at CUNY. Don’t just accept it. Call the governor, the chancellor, the mayor.

This Brooklyn newspaper article is from 2006 after an Arab-Muslim man from Sarsour’s Bay Ridge mosque was convicted of planning to bomb NY’s Herald Square subway station.

As evidenced, the lawyer for the accused complains about the NY police surveilling the Bay Ridge Mosque which helped identify and PREVENT the attack.

You can read for yourself what Sarsour has to say.

The lawyers for the accused pointed out that the Bay Ridge Arab-Muslim mosque community doesn’t believe what most Americans believe about 9/11. They don’t believe it was done by Arabs who hijacked airplanes. They think the CIA did it so Bush could bomb Arab countries and kill arab children.

If this is still the thinking of New York Arabs, believing self-serving conspiracies, why would anyone doubt that NY Arab-Muslim activists like Sarsour would distort other speeches depending on the audience?

Taqiyya – friend. The Koran approves of deception of the infidel.