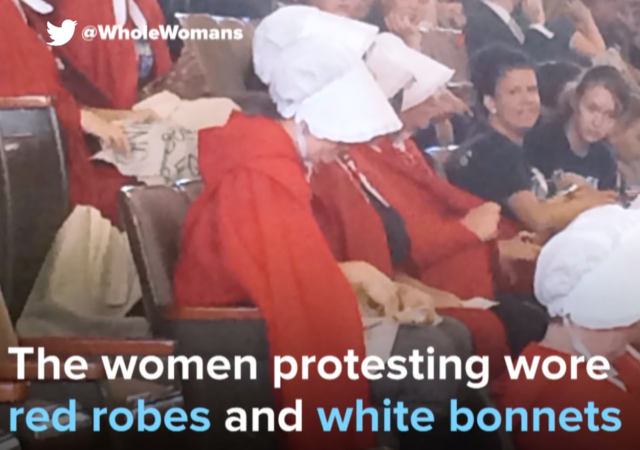 Everything in Trump’s America is a dystopian tale a la Margaret Atwood’s The Handmaid’s Tale, regardless of whether the fictional overlay is congruent with reality.

Made popular once again by a recent Hulu reboot, women wore blood-red cloaks and white bonnets.

In March, a handful of women dressed in fictional garb protested pro-life legislation at the Texas Capitol.

From the Boston Globe:

Two by two, they ascend capitol steps to overlook Senate galleries in eerie silence. In their contrasting blood­red cloaks and stark white bonnets, the women look like they might have stepped out of history.

Borrowing from the imagery of “The Handmaid’s Tale,” a Hulu TV series that started in April, activists dressed as handmaids are providing perverse optics at demonstrations for women’s rights at state houses across the country. Quiet and demure, they mimic the women forced to bear children for a childless elite in a theocratic dystopia envisioned by Margaret Atwood’s 1985 book, which returned to the bestseller list after the bruising gender wars of the 2016 election.

“Forced to bear children.” I hate to be the perpetual “well actually” annoyance here, but contrary to whatever delusion these women have surrendered to, no one in this country is forcing anyone to bear children they didn’t choose (and barring extreme and statistically minuscule circumstances (read: rape), getting knocked up is a choice). Neither is this country anywhere close to a theocracy, in fact, our culture is more secular now than it has been at any other point in my lifetime.

Texas is not the only capitol to be graced with costume adorned delusion. New Hampshire has experienced its own ill-informed outbreak (still citing from The Globe):

“That’s why it’s such a perfect visual for this — because you see these women who are completely hidden,” said coordinator Emily Morgan, a 33­ year­old mother who lives in Milford, N.H. “That is how they would have us, if they could, really and truly.”

A trio of handmaids, heads bowed, provided a backdrop for Morgan and other demonstrators this month at the New Hampshire State House, where they called for the resignation of a legislator they accused of condoning rape culture.

Representative Robert Fisher, who ultimately did step down, had been unmasked by The Daily Beast as the creator and continuing contributor to The Red Pill, a men’s rights forum where he dwelled on the idea of false rape accusations, mocked women’s intelligence, and advised men to record their sexual encounters on video for evidence of consent.

I’m not going to defend Fisher, buuuuuut, I wonder where in the world he came up with the idea that women might falsely accuse a man of rape which might require men to protect themselves or have evidence of mutual consent… (see here, here, here, and here.)

When women do dumb things like dress up as characters from a “speculative fiction” novel which tickles SJW fancies, I, a woman, also question their intelligence or at the very least their ability to discern fiction from reality.

Women in this country have more rights than any other segment of the population but rather than use their platform for good, they’ve descended into a delusional and juvenile pit of idiotic vengeance; always looking for a foil so their perpetual victimhood will remain intact, even if that foil doesn’t exist.

You beet me too the punsch!

The dystopian vision of the World comes from the left. They advance doctrines that will lead to the utter and total dependence of women on an all powerful State.

It was not the fundamentalists (a la The Handmaiden’s tale) who said your children are not yours. That is a left wing idea.

Forced to bear children? They could always get their employers to provide them with birth control hahaahahahhaha oh that’s right, Trump took that away from them too hahahahahhahaa

Ah, no. It wasn’t “employers”, which implies all employers. What Trump has proposed is to give religious employers the option to offer birth control or not. In other words – give them their 1st Amendment freedom, which was taken away from them by Obama.

Why is it anyone’s responsibility other than the individual to provide birth control?

Well, the youngins need to screw but have no money, because patriarchy.

She Chose. She conceived. She Planned. She aborted.

The rite of a woman to deem life unworthy shall not be denied.

The Pro-Choice quasi-religious/moral/legal doctrine has radicalized the national and international left.

I humbly apologize for my sex.

And here I always thought they were one and the same.

Nobody expects the Spanish Inquisition!!!

Monty Python for the win!

Might be a good way of countering this stupidity and muddying their water, call them the Spanish inquisition.

Any excuse to play dress-up.

They look better wearing those bonnets.

More gear for sexually hopeless radical ‘feminists’ to hide their ugly faces – and hope the rest of women have to follow suit.

Put them in burkas and get it over with.

I can’t wait until Femnazis jump the shark and start donning niqabs and burqas to show their support for women’s rights.

I don’t get it. They’re showing up in the New Hampshire state legislature to protest bills in Texas? One bill bans a “common procedure used in second trimester abortions”. Dismemberment, maybe?