In their analysis, the CBO indicated 23 more Americans would be uninsured if the Senate were to pass the AHCA.

The American Health Care Act — the health care legislation that the House passed at the beginning of May — would lead to 23 million more Americans being uninsured in 10 years, versus what would be expected under Obamacare, according to a new report from the Congressional Budget Office.

The House bill would also cut taxes by $662 billion over the next decade, according to a separate analysis released Wednesday by the Joint Committee on Taxation, mostly by repealing Obamacare taxes on the wealthy and health care industries.

House leaders were criticized intensely for having their members vote on the bill without a full report on its possible effects on May 4. Three weeks later, the consequences of that vote, if the bill as written were to become law, are finally clear.

Amazingly, the AHCA’s tax cutting, deficit saving benefits are omitted from most headlines. But back to the uninsured numbers. How did the CBO determine some 23 million more Americans would likely find themselves health insuranceless?

By using faulty baselines, of course:

As expected, CBO is using the March 2016 coverage baseline that they have already acknowledged is WILDLY wrong. pic.twitter.com/zjK96jUkaX

How wrong is the 2016 coverage baseline CBO used? Off by at least 5 million people *according to CBO themselves*!https://t.co/DlbhIi3FgZ

@kerpen Here is the annual error in covered lives of the CBO 2016 and 2017 baseline. Shocking something so out of date can be used. pic.twitter.com/unHd1kXWxQ 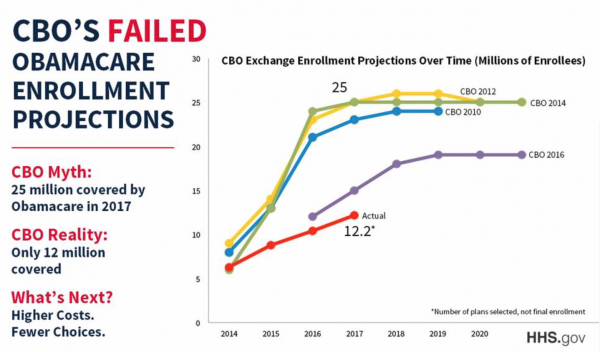 Back in March, when the first round of projections was released, Mary blogged:

BCO and JCT [Joint Committee on Taxation] estimate that, in 2018, 14 million more people would be uninsured under the legislation than under current law. Most of that increase would stem from repealing the penalties associated with the individual mandate. Some of those people would choose not to have insurance because they chose to be covered by insurance under current law only to avoid paying penalties, and some people would forgo insurance in response to higher premiums.

The CBO believes the uninsured number will go up to 24 million by 2026 due to “changes in Medicaid enrollment – because some states would discontinue their expansion of eligibility, some states that would have expanded eligibility in the future would choose not to do so, and per-enrollee spending in the program would be capped.”

It’s worth reiterating that should there be a drastic rise in uninsured Americans, it won’t be because the AHCA destroys their health insurance plans or makes coverage unattainable, it will be because in the absence of the individual mandate, many will simply opt out of health insurance entirely. At least until the market makes it more affordable.

I won’t waste any time on C.B.O. projections as they are pure fantasy.

Insofar as Congress has not passed an actual “budget” in many years, why the he]] do we even have a Congressional “Budget” Office?

(I know, I know, there are arcane Senate rules that require it or whatever. Blah blah blah)

Wow! I would have expected it to be higher!

Just repeal it (or let it collapse on its own) and let the free market figure it out. Cutting off the free cheese should rekindle the competitive creativity in those insurance companies. People will buy policies that cover what they need/want at the price they can afford. That is what markets do best.

And besides, that 23 million is probably due mostly to the illegals who would no longer qualify. There are probably around 40 million illegals and refugees in this country, not the 11 million which was first reported around year 2000 and hasn’t changed since. So these CBO numbers are based on nothing but guessing built over a faulty baseline using political math. BS data fed into a BS model yielding a BS report. Imagine if we built bridges that way.

“People will buy policies that cover what they need/want at the price they can afford”
Oh, do you mean the free market? Like what we had before Obamalamadingdongcare?!!
Can’t have that. /

Who elected the CBO to make these decisions for us?

Answering my own question, Richard Nixon gave us the Congressional Budget and Impoundment Control Act of 1974

1. do not produce a change in outlays or revenues;

2. produce changes in outlays or revenue which are merely incidental to the non-budgetary components of the provision;

3. are outside the jurisdiction of the committee that submitted the title or provision for inclusion in the reconciliation measure;

4. increase outlays or decrease revenue if the provision’s title, as a whole, fails to achieve the Senate reporting committee’s reconciliation instructions;

5. increase net outlays or decrease revenue during a fiscal year after the years covered by the reconciliation bill unless the provision’s title, as a whole, remains budget neutral; or

So, is the issue medical insurance (a la Fannie/Freddie, education debt), or affordable, available medical care?

They are not equivalent.

Opting out of purchasing coverage because fed/state mandates and regulations have made it prohibitively expensive is the same as losing health insurance. When your coverage is more than your mortgage, are you going to sell your house and live in your car to afford insurance for a few more months?

Talk to people who own very small businesses or are otherwise self employed about what it means to absorb the full cost of insurance. Money that could have been put back into their business or saved for retirement is being pissed away thanks to fed and state governments.

Before Obamacare, my BC/BS premium was half of my mortgage.

Its now over twice that.

Vote them out. All of them.

For many of us, losing or oping out of health insurance is not the same as losing health care. We just choose to pay the lower tax option and discounts for paying in cash for the health care we need. Health “insurance” is just a tax. The SCOTUS has ruled.

Losing insurance not the same as losing health care. Truly sick are always cared for in our hospitals, they’ll bill you later, write it off, negotiate it down from ‘billed’ to market charges, etc.

This is why we need the ability to buy policies from other states that don’t mandate community rating, don’t mandate every carrier include a transgender benefit, unlimited massage therapy, surrogate mothers, etc. Buy a policy in Utah covering calamities you might face, accident, injury, knee replacement; pay cash for your annual check-up and dermatologist and you’ll be fine.

Should an outfit like the CBO publish actual prices (not ‘billed charges’) and meaningful quality ratings, people could choose the care that has the most value for them, not for the folks in the State capitol building.

Healthcare is, in the end, a business (well, it used to be) and if you treat it like one, people will make the right decisions for themselves, if you give them real data. For the feeble or the undecided, or those getting subsidies, healthcare professionals can guide them to the right policy and watch the smiles on the patients faces when they get the policy they want at a price they can pay. Harvard economist Dr. Michael Porter covers this in an old-but-still-valid book ‘Redefining Healthcare’ that should be required reading for anyone desiring to monkey with the regulations.