The Congressional Budget Office (CBO) has released its analysis of the House Republican Obamacare replacement bill, which estimates that millions will lose coverage, but will bring down costs.

The report has many people freaked out, with some saying its proof that repealing Obamacare will harm Americans. Most major media outlets and Democrats have failed to mention that many of those would “lose” coverage will do so because they choose to opt out. The AHCA repeals one of Obamacare’s worst features — the individual mandate.

BCO and JCT [Joint Committee on Taxation] estimate that, in 2018, 14 million more people would be uninsured under the legislation than under current law. Most of that increase would stem from repealing the penalties associated with the individual mandate. Some of those people would choose not to have insurance because they chose to be covered by insurance under current law only to avoid paying penalties, and some people would forgo insurance in response to higher premiums.

The CBO believes the uninsured number will go up to 24 million by 2026 due to “changes in Medicaid enrollment – because some states would discontinue their expansion of eligibility, some states that would have expanded eligibility in the future would choose not to do so, and per-enrollee spending in the program would be capped.”

The CBO and JCT estimates that premiums will go up….at first. But as the market begins to steady, “the increase in average premiums from repealing the individual mandate penalties would be more than offset by the combination of several factors that would decrease those premiums.” The factors are:

The group estimates that by 2026 the premiums for single policyholders will go down 10%. The CBO states that the new legislation would let the insurers “would be allowed to generally charge five times more for older enrollees than younger ones.” This obviously makes sense since older people generally have more health problems.

Of course with every new legislation comes uncertainty and instability. This is no different. The CBO predicts instability will occur, but the changes in the legislation will “lower average premiums enough to attract a sufficient number of relatively healthy people to stabilize the market.”

“The fact of the matter is (Americans) are going to be able to have a coverage policy that they want for themselves and for their family,” he added. “They are going to have the kind of choices that they want. … So we think that CBO simply has it wrong.”

The Effect on Federal Budgets

All of this could potentially “decrease federal deficits by $337 billion over the 2017-2026 period” due to a “$1.2 trillion decrease in direct spending, partially offset by an $883 billion reduction in revenues.” From the report: 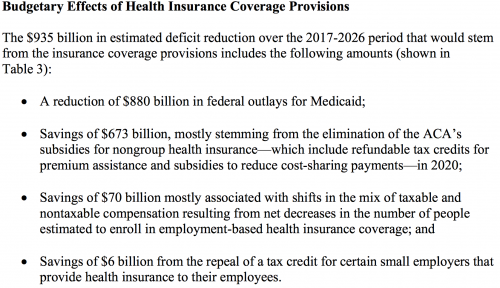 Speaker Paul Ryan (R-WI) seems to be the only one who actually read the CBO report:

“Where I’m encouraged is once our reforms kick in, what the CBO is telling us is it’s going to lower premiums,” Ryan said. “I’m excited about this analysis and yeah, I think they sort of overestimate the uninsured number just like they overestimated who would be insured by ObamaCare.”

To this point, Ryan said, “Our plan is not about forcing people to buy expensive, one-size-fits-all coverage. It is about giving people more choices and better access to a plan they want and can afford. When people have more choices, costs go down.”

But as with everything to do with government, remain cautious. Professor Jacobson blogged about the CBO’s scoring of Obamacare and how the group pretty much got everything wrong. He called the CBO’s credibility the very first victim of Obamacare:

The CBO is supposed to be a neutral calculator of legislation. And it is. I have no doubt that the people at the CBO do their best to calculate the cost of a bill, given the assumptions the CBO is required to follow.

And that is the catch. Whereas on less politicized legislation there may be reasonable assumptions built into a bill and requested by those seeking a cost estimate, as to the health care bills proposed by Democrats it has been all games.

Completely unrealistic assumptions have been foisted upon the CBO, and the CBO has been required to score the bill with phony math.

Across state lines, free market health insurance without government regulations dictating how it is purchased is the only thing Conservatives should be supporting. Letting a private company profit off my desire to not purchase health insurance instead of the IRS is indefensible.

Just say “NO!” to this betrayal. Because that is what it is.

Repeal. As promised. Don’t just change the bread on the crap sandwich and say you did what you said you’d do.

Conservatives ought to support state insurance regulations. It’s possible to move out of an oppressive state, it’s much tougher to find a free nation for relief

Why should the “state” be allowed to intrude upon my purchase decisions?

You forgot to prefix CBO with “non-partisan”, as somehow they think this lends more credibility to their nonsense.

Ah, was that the same CBO that said the ObamaCare exchanges would provide insurance for 28 million instead of the 2 to 4 million that actually purchased coverage?

I should have said additional 2 to 4 million.

This seems to be a static analysis that doesn’t account for market dynamics (and maybe that’s not possible at this point).
That is, how many of the people who drop ACA policies will purchase less expensive policies that don’t cover childbirth, drug rehab, unlimited psychotherapy, and the like?

The CBO, just as the Senate’s filibuster does, provides another way for our elected officials to mislead us.

Health care for all is not affordable, even for the richest nation the world has ever had. Period.

If the government insists on getting involved, then it should use funds from general revenues, hire its own doctors and build its own hospitals and provide the health care that its taxpayers will fund.

If the government insists on getting involved, then it should use funds from general revenues, hire its own doctors and build its own hospitals and provide the health care that its taxpayers will fund.