Students for Justice in Palestine honors convicted terrorist killer and immigration fraudster, but twice as many people honor her victims 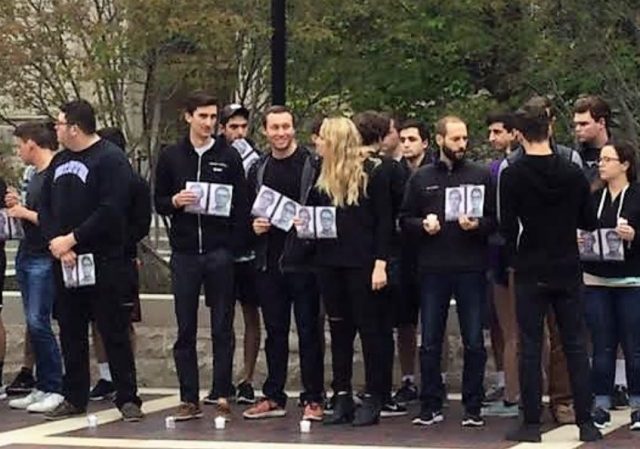 Rasmea Odeh recently pleaded guilty to immigration fraud, for failing to disclose on her immigration applications her 1970 conviction and imprisonment in Israel for a 1969 supermarket bombing that killed two Hebrew University students, Edward Joffe and Leon Kanner.

Rasmea concocted a defense that she falsely answered the questions because she was suffering from PTSD, which made her “filter” the plain wording. At multiple levels that defense was as big a lie as her lies on her immigration forms, and in the plea agreement she admitted her false statements were not the result of PTSD or any other mental condition.

But if you need a refresher on the case, and Rasmea’s other nonsense claims, see our coverage of the guilty plea, Rasmea Odeh pleads guilty to immigration fraud, and follow up post, VIDEO: Terror victim’s brother says Rasmea Odeh supporters “have to eat their words”.

Rasmea has been treated as a hero by anti-Israel groups, including Jewish Voice for Peace and various chapters of Students for Justice in Palestine (SJP).

SJP had an event on Monday night, May 15, honoring Rasmea, where she was to appear with anti-Israel pro-BDS professor Nadine Naber: 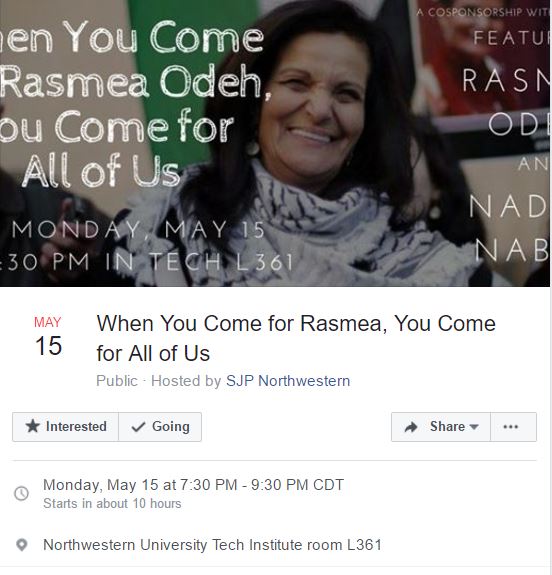 Pro-Israel groups organized a vigil outside the venue.  Northwestern Hillel circulated this statement (emphasis in original):

Dear members of the Hillel community,

On Monday night, Students for Justice in Palestine (SJP) Northwestern will host an event featuring activist Rasmea Odeh, a convicted terrorist responsible for the death of two Israeli students in a 1969 supermarket bombing in Jerusalem.

As advocates for the right to free speech and open discourse, especially given the current climate on college campuses across the country, we respect SJP’s right to invite speakers who challenge our opinions and beliefs and deepen our understanding of complex issues. However, hosting a convicted terrorist at Northwestern is an affront to the sanctity of life and crosses a moral line.

Northwestern Hillel and other campus organizations will host a silent vigil in the courtyard of Tech before the event. Please join us at 7 p.m.; we encourage all vigil participants to wear black. We will have yizkor (memorial) candles and photographs of her victims available for vigil participants to display.

This will be a silent, non-confrontational vigil. We will not attempt to disrupt the event in any way. Our goal is not to protest free speech, but instead to mourn the victims of the convicted terrorist who is speaking on our campus.

This vigil will not be a boycott. Rather, it will provide a space for those disturbed by Rasmea’s presence on campus to quietly and respectfully mourn her victims.

Following the vigil, students are welcome to come to Hillel to decompress and debrief. While for some this is difficult and challenging, it is also an opportunity for discussion and learning. Several students and staff will be available for anyone who would like to talk.

Students for Justice in Palestine chooses to honor Rasmea; we choose to honor her victims.

At the event tonight, there was a long line of students holding vigil, in this photo obtained from the pro-Israel group StandWithUs: 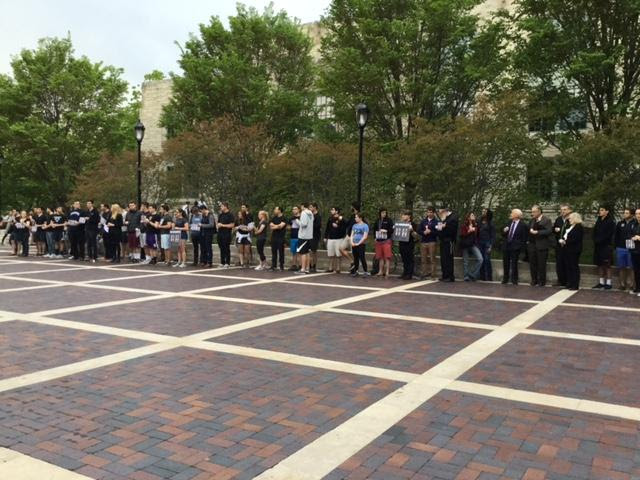 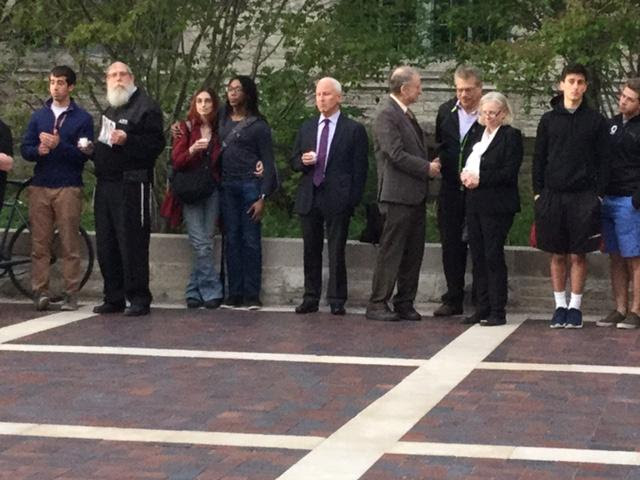 The event tonight is further evidence that SJP, a virulently anti-Israel, anti-Semitic organization, excuses, justifies, and even endorses terrorism. SJP claims unity with Odeh at their “You come for Rasmea, You Come for us all” program tonight.  While they demonstrate allegiance to a criminal who was convicted for her involvement in two 1969 bombing plots that killed two people and injured nine others, other Northwestern students engage in a silent memorial service outside the venue.

150 students, faculty and administration, including NU President Morton Schapiro and Assistant to the President Eugene Lowe, stand shoulder to shoulder making a unified statement that the the terrorist doesn’t get the last word. In solemn unity they remember her victims.

Based on reports I received, there were about twice as many people attending the vigil as attended the event. 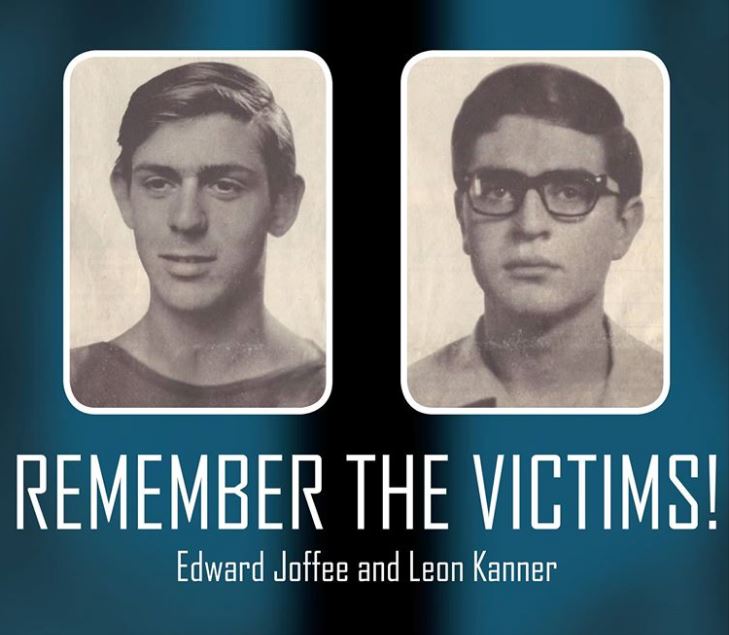 I think Rasmieh Odeh is a PoS. I think she deserves to be back in prison and not wondering the planet spreading her poison. That said, what’s good for the goose is good for the gander. She IS a terrorist, she is VILE, but never in a million years should she not be allowed to speak freely, and I don’t believe in any organization that tries to silence her forked tongue. It was a good show of solidarity and sacred right to assemble peacefully to disagree with this witch of a woman, but there are lines and silencing her is one of those lines that must NEVER be crossed.

…but never in a million years should she not be allowed to speak freely, and I don’t believe in any organization that tries to silence her forked tongue.

There was no attempt to silence Odeh. I’m not sure how your comment relates to this situation in any way.

Pro-Israel groups organized a vigil outside the venue. Northwestern Hillel circulated this statement (emphasis in original): …

As advocates for the right to free speech and open discourse, especially given the current climate on college campuses across the country, we respect SJP’s right to invite speakers who challenge our opinions and beliefs and deepen our understanding of complex issues. However, hosting a convicted terrorist at Northwestern is an affront to the sanctity of life and crosses a moral line.

Shane, of course, you left this part of Hillel’s statement out of your reply…

This will be a silent, non-confrontational vigil. We will not attempt to disrupt the event in any way. Our goal is not to protest free speech, but instead to mourn the victims of the convicted terrorist who is speaking on our campus.

Are you not able to see the difference between protesting a terrorist’s presence on campus and denying that terrorist’s a right to speak?

I am lost. I commented on what was said. I praised what was done. What was said was wrong. What was done was right. I am unsure what your problem with me calling out what to me is a clear impingement of free speech. Had Hillel had other means available to them, then what was said indicates that they would have used those other means to silence Odeh. That would be wrong. Are you honestly so confused by words and actions?

Inviting her to speak in the first place was immoral. If the protesters were able to, they would have had her invitation rescinded. That is not silencing her.

(Or if you insist it is, then she should have been silenced; you’re using one of the left’s favorite tactics: taking a word for something that everyone agrees is right or wrong, and redefining it to include things that everyone does not agree are right or wrong, but expecting the moral implications of the old definition to extend to the new one.)

Why is she even still here in the US?

Her guilty plea has been accepted by the court, but the formal sentencing is not until mid-August. Not clear how long after that she’ll be deported. So until then, she’s free to attend events honoring her, which probably will be many.

Odeh is merely a symptom. The disgust is upon the people who find the sociopath someone to support.

Why is she still here???

It is mystifying – well, perhaps not quite, but still upsetting and somewhat puzzling – that murderers “for a cause” are extolled, but murderers for the defense against those murderers would be crucified. So to speak.
That was so vague, let me try again. If you kill, maim, torture, all for “Palestinian Freedom”, you are publicly lauded by certain irrational souls with substantial visibility. But if you defend yourself against those murderers, much less actually engage in such attack yourself, you are vilified as a “murderer”. That distinction cannot possibly be explained objectively. The history and facts suggest that killing Jews is still a widely encouraged act. And protecting Jews is still widely abhorred. A large number of people are evil. That’s really the keen analytical conclusion I’ve reached after careful examination of attitudes. Either they have good intentions marred by flawed factual analysis, or they are villains whose intentions are truly evil and are uninhibited by any modern moral strictures.
So Odeh is normal for our times, as are those vocal supporters who support her murderous actions, so long as Jews are the target.

You must realise that even in today’s world Jews are denied Human Rights.

If I had been there, I would have taken a yizkor (memorial) candle and a photograph of her victims available for vigil participants and held it high above my head.

Why is she still here?

Just like Obama and Hillary, and the Chicago Mob……