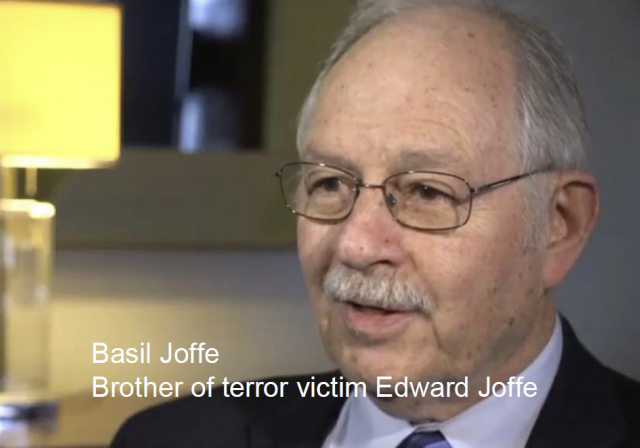 Yesterday Rasmea Odeh pled guilty to immigration fraud for failing to disclose when she came to the U.S., among other things, that she was convicted in 1970 of the bombing of the Supersol supermarket in Jerusalem that killed two Hebrew University students, Edward Joffe and Leon Kanner.

A second bomb planted in the supermarket on a delayed fuse, intended to hit first responders, was disarmed just seconds prior to detonation.

In August 2017, Rasmea will be sentenced to deportation and will be stripped of her fraudulently-obtained U.S. citizenship. She will not, however, serve more jail time beyond the 5 weeks she spent in jail earlier in the case.

Our post about the guilty plea covered not only the plea deal, but also the history of how Rasmea and her supporters repeatedly have lied to create a false narrative that Rasmea is a victim.

Key to those lies was the claim that Rasmea falsely answered immigration questions about her prior conviction and imprisonment because she suffered from Post Traumatic Stress Disorder as a result of an alleged 25 days of sexual torture in 1969 to coerce her confession. In fact, Rasmea confessed one day after arrest, so her torture claim was contradicted by objective evidence. (There also was independent evidence of her involvement in the bombing, including video statements years later by her co-conspirators.)

Yet the claim of PTSD was enough to gain Rasmea a new trial. The legal theory was wrong (as we wrote in detail), but the judge granted a new trial anyway. And the PTSD and torture claims were repeated endlessly by anti-Israel groups like Jewish Voice for Peace as justification for backing the convicted killer of two Jewish students.

The new trial was scheduled for May 2017. Rasmea however took the plea deal, on the same terms she was offered but rejected in 2014.

What changed? I think that’s clear.

The government stated its intention, and asked court permission, to take the sworn video depositions of Rasmea’s two co-conspirators, who now live in areas controlled by the Palestinian Authority. Those two previously had given video statements for pro-Palestinian documentaries confirming Rasmea’s involvement in the bombings. 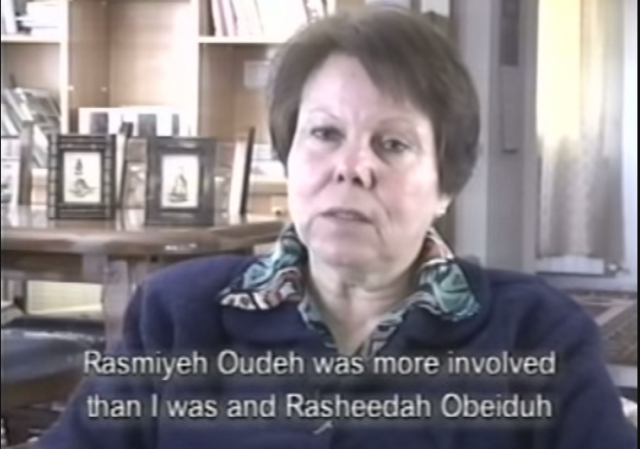 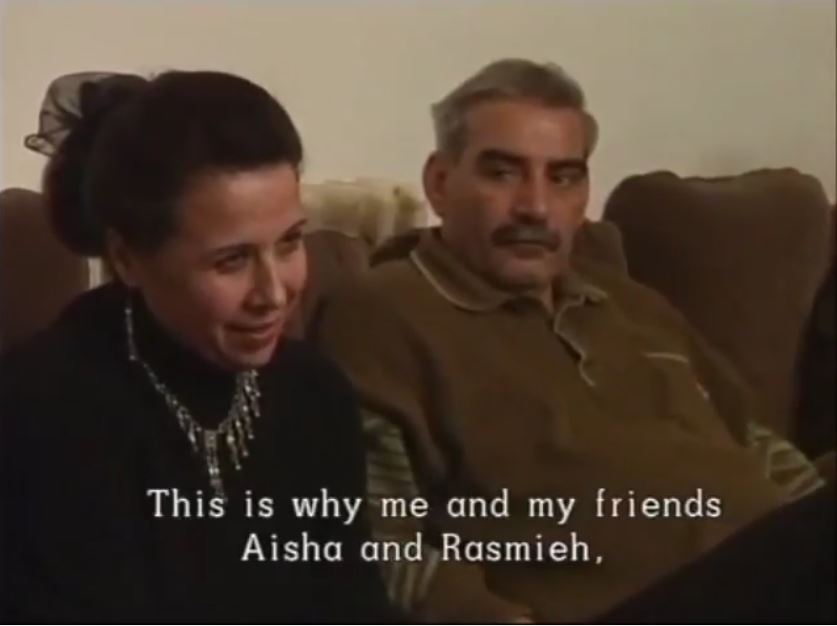 Rasmea faced the prospect that her claim of innocence in the bombings, which has become her life narrative of being a victim of torture and PTSD, would collapse in public testimony by her co-conspirators. Rasmea and her supporters would be revealed, again, to be liars. Rasmea would be convicted again, and likely receive more than the 18 months imprisonment to which she was sentenced after the first immigration fraud trial.

So Rasmea took the plea deal. But she didn’t just take the plea deal, she admitted in writing that her entire defense — including the PTSD — was false.

Here is the section of the plea agreement (pdf. here)(emphasis added):

After the guilty plea was approved by the court, Basil Joffe, brother of Edward Joffe, gave his thoughts on the meaning of the conviction.

The message to be learned from this is that in the end criminals will be caught, and will pay the penalty for the crimes they committed. This defendant spent 10 years in Israel in prison and was released in a prisoner exchange. And so in some sense that was her punishment for the crimes she committed in Israel.

And then she came to the U.S. and committed immigration fraud, and assembled a large gang of supporters who championed her and made a hero out of her. And I think it’s quite satisfying that now they’re going to have to eat their words, especially when the content of the plea bargain, which is no in the public domain becomes more public and all her supporters read with clarity what it is that she’s confessed to have done, then I think it will bring some satisfaction to us.”

Basil’s daughter (and Edward’s niece) Terry Joffe Benaryeh, who has written extensively about the family’s reaction to the case, provided this statement after the guilty plea:

While we would have obviously preferred some semblance of remorse from Odeh, we’ll take this plea bargain as a dose of restorative justice and a bit of closure from this horrendous ordeal. We see this as an admission of guilt and hope that her misguided supporters do too. It will be a relief to have Odeh gone from this country, but it would be far better to see her supporters condemn her past and find a more worthy hero. Maybe Odeh will soon be forgotten, but the memory of Edward and Leon will live on forever.

I don’t expect that Rasmea’s supporters in the U.S. will take to heart the massive deception they and Rasmea have perpetrated, now that it has been revealed in court.

It never was about the truth for them, just about hating Israel and Jews. The end justified the means for them. And in the end, they lost.

Basil will be disappointed. They will say (and probably already are saying) that she was forced to make this false confession to avoid jail time. The only think you might convince them of is that she’s maybe not as hard core as they thought she was, being unwilling to stand on “principle”, even if it cost her freedom.

In their world, nothing can ruffle the narrative.

Nah. Down the memory hole.

Rasmea who? Never heard of her. But have you heard about the awful Israeli barbecuers torturing the innocent Palestinian prisoners-of-conscience?

I’d be happier of Odeh supporters had to eat her…..the old crow…

After she’s booted out of the country, perhaps Mossad can visit Odeh and complete her ‘sentence.’

Instead of eating words, she can eat lead.

Ode’s ‘supporters’ couldn’t give a rat’s ass about her – she’s just useful. As far as their eating their words, don’t count on it in the sense it will change or shame them.

Sociopaths don’t change – they just age-out and get weaker.

What is taking so long getting her murdering butt out of the country?