Convicted murderer of two Israeli students will be formally sentenced in August, to be deported and stripped of U.S. citizenship with no jail time

This afternoon in federal court in Detroit Rasmea Odeh pleaded guilty, as expected, to immigration fraud. She received no jail time, but will be deported and stripped of her U.S. citizenship, which she fraudulently obtained. The plea agreement (pdf. here) is embedded at the bottom of this post.

We have told Rasmea’s story many times, and thoroughly debunked her claims and those of her supporters that she is the victim in this process.

The only victims are Edward Joffe and Leon Kanner, who were killed in the 1969 Jerusalem supermarket bombing for which Rasmea was rightly and justly convicted in 1970. 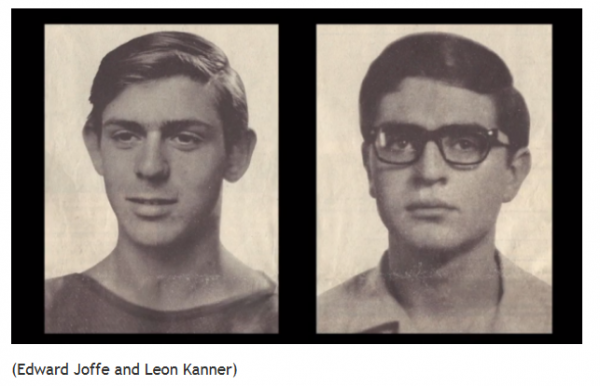 Contrary to the claims of Rasmea supporters, the trial was open and observed by the International Red Cross, whose observer stated on the record afterwards that the trial was fair.

Rasmea’s claim that she only was convicted of the bombings because she falsely confessed after 25 days of sexual torture is contradicted by the objective fact that Rasmea confessed in writing the day after arrest, not 25 days later. There was and is other objective evidence of her guilt, including video statements for pro-Palestinian documentaries decades later by Rasmea’s two conspirators.

These key posts of summarized the evidence showing Rasmea’s involvement in the supermarket bombing:

At the time of the bombing and conviction in Israel, Rasmea was a military member of the terrorist group the Popular Front for the Liberation of Palestine. Rasmea was so important to the group that Leila Khalid, the first female airplane hijacker, formed to Rasmea Odeh Brigade to try to free her. Rasmea also was on the list of prisoners whose release was demanded by the Black September terrorists who took Israeli hostages at the 1972 Munich Olympics. Yet Rasmea’s supporters would have you believe she was just an innocent political activist.

Rasmea didn’t serve her life sentences in Israel, however. In 1979 she was released in a prisoner exchange for an Israeli soldier captured in Lebanon. She made her way to Lebanon, then Jordan, then to the U.S. in the mid-1990s, when she lied on her visa application by denying any prior convictions or imprisonment, or being a member of a terrorist group.

Rasmea again lied on her naturalization papers, denying that she “EVER” (caps and bold on application) was convicted or imprisoned. She also falsely stated that she never was a member of a terrorist group or was involved in terrorism.

After an initial conviction in November 2014 for obtaining naturalization unlawfully, Rasmea was given a new trial so a psychologist could testify on her behalf that Rasmea falsely answered the immigration questions because she was suffering from PTSD as a result of alleged Israeli torture. That claim was ludicrous on its face, but it was enough to earn her a new trial. That new trial was supposed to take place in May 2017.

Instead of taking the case to trial again, and obviously fearing a lengthy prison sentence, Rasmea accepted a plea deal. While Rasmea’s supporters claim the deal was a victory because it would keep her out of jail, in fact is almost identical to the plea deal Rasmea was offered and rejected in 2014.

From what I’m told by people in the courtroom, the plea deal stipulated to certain facts about the immigration fraud. [added – Plea Agreement embedded below] The prosecution, as laid out in a memo prior to the hearing, also provided an independent basis, unrelated to lying on the immigration forms, for the guilty plea.

Significantly, Rasmea admits in the Plea Agreement that the PTSD defense did not cause her to answer falsely, despite all the hoopla in her defense about it:

Reports from people in the media room indicate the statement below was not read out loud, but was referenced by the Judge. It does not appear that this forms a basis of the guilty plea, though that is unclear. Here is what the prosecution said in a court filing it could have proven at trial as an independent ground upon which to support the guilty plea:

In 1969, Defendant Odeh was a member of the Popular Front for the Liberation of Palestine.

In February 1969, she participated in the planning to bomb the Supersol supermarket on King George Street in Jeruaslem, Israel, and also participated in the planning to bomb the British Consulate in Jerusalem, Israel. The bombings were planned on behalf of the Popular Front for the Liberation of Palestine. Persons with whom Defendant Odeh planned one or more of the bombings included Aisha Odeh, Rasheeda Obeiduh, and Samya Qasem.

Defendant Odeh also participated in carrying out the bombing of the Supersol supermarket on King George Street in Jeruaslem, Israel, which took place on February 21, 1969. The bombing was carried out on behalf of the Popular Front for the Liberation of Palestine.

Defendant Odeh also personally placed a bomb at the British Consulate on February 25, 1969, which exploded and caused damage but no injuries. Defendant Odeh planned the bombing with Samya Qasem, who accompanied her when Defendant Odeh placed the bomb.
Defendant Odeh was arrested on February 28, 1969, by Israeli authorities. She later was charged with offenses, put on trial, convicted, and sentenced to life imprisonment. In 1972, when terrorists from the Popular Front for the Liberation of Palestine kidnapped and murdered eleven Israeli athletes at the Munich Olympics, Defendant Odeh was one of 236 persons whose release the terrorists demanded in exchange for release of the hostages. In
1979, Defendant Odeh was released as part of a prisoner exchange between the Popular Front for the Liberation of Palestine and Israel.

The brother and niece of Edward Joffe attended the plea hearing.

Legal Insurrection reader Dan Cutler, who has been following our coverage, was outside the courthouse as a smallish crowd (about 35) of Rasmea supporters gathered. 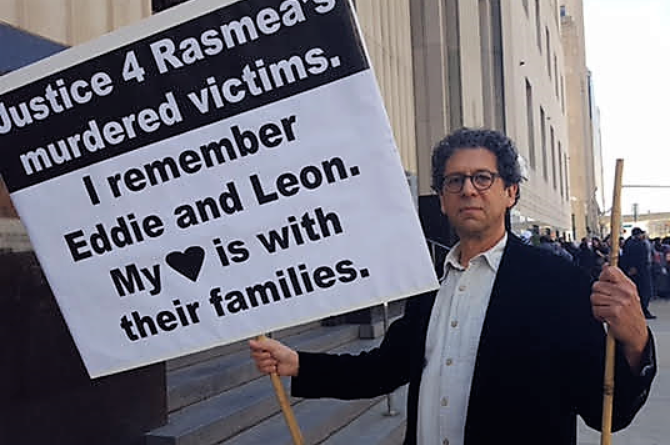 In perhaps the real indignity to Rasmea, her supporters (including numerous groups) had predicted they would turn out “hundreds” of people to protest on her behalf. Does this look like “hundreds”? 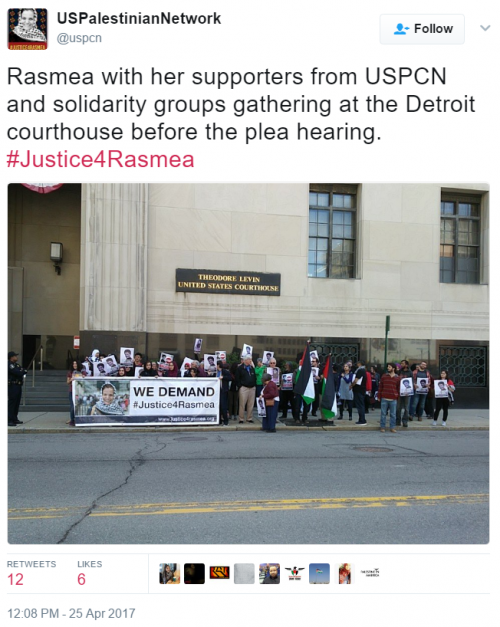 Even Ali Abunimah, who runs Electronic Intifada, couldn’t make the crowd look large, despite a closely cropped side angle shot: 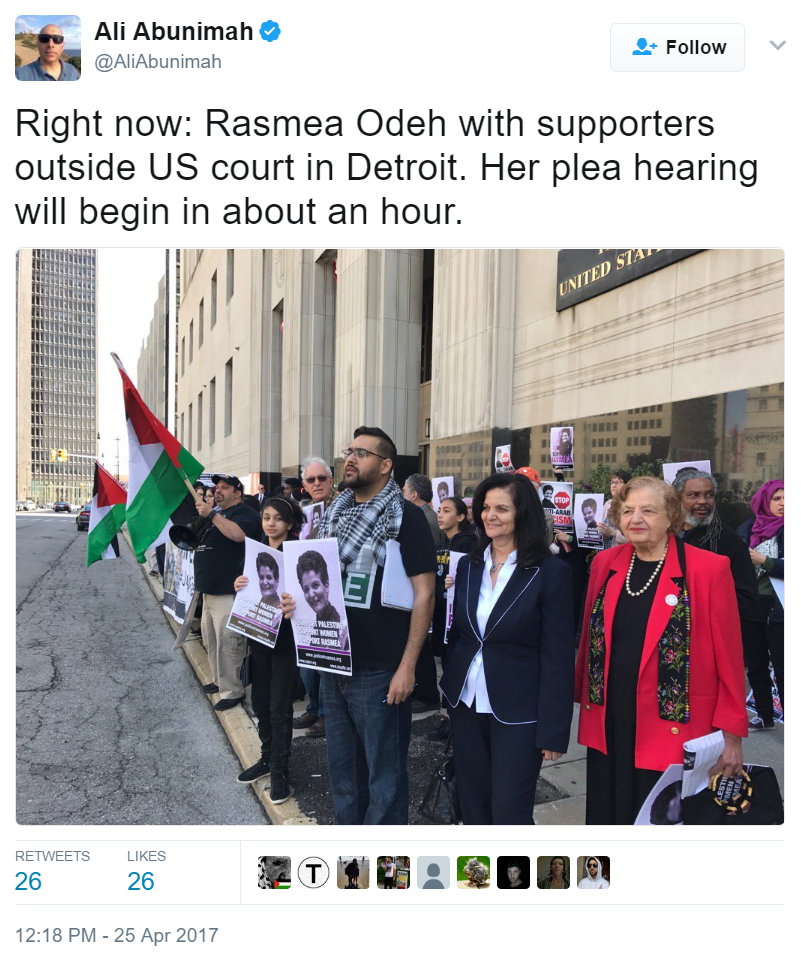 Why the delay in sentencing? We don’t know for sure right now, but it may be that there are issues that need to be worked out as to where she will be deported, since that country would have to agree to take her.

[We expect to update this post and add additional posts as we receive reports from people who were in the courthouse for the plea.]

I am thinking some very unchristian thoughts about Odeh and mostly her supporters.

Justice will be done. But it’s going to be a long, hard wait.

It seems to me that implanting a small bomb in her womb would be poetic justice. Release and detonate.

Maybe one of those Jewish zealots we always read about will put a bullet in her head just before she boards her plane . Hey, you never know.

My thoughts may be unchristian, but not that unchristian. I don’t want to make it appear I’m hoping or advocating for that.

The final judge will judge her. And I believe she’s 69 so it may not be so long after all.

Well. That was expensive.

How about Israel take her back. Then straight back to her life sentence there. Pretty sure Eddie and Leon would agree.

Deport her to North Korea.

North Korea is a nice idea, but since she seems to be Muslim, how about Saudi Arabia?

I was hoping she’d be out of the country today, and I’m sorry to hear she’ll be here until August.

The plea agreement says in Paragraph 4A she is a citizen of Jordan, so will go there unless some other country will agree to take her (per Paragraph 4C).

It says she understands will be barred by law from ever again applying to go to the United States.

Jordan it is, then, assuming they take her. We give them a good bit of foreign aid so presumably we can tell Jordan to take her or else.

Muslims can’t even coexist with other Muslims. Like Liberalism, Islam is a death cult.