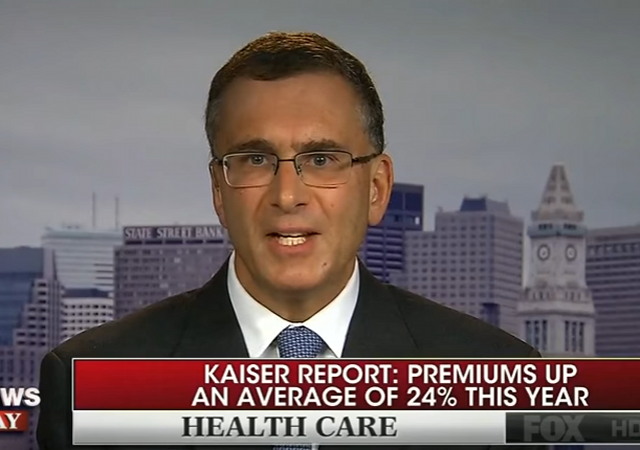 In today’s episode of “Democrats can’t be blamed for anything” the lead role will be played by Obamacare architect Jonathan Gruber, who famously credited the stupidity of the American voter for the law’s passage.

While appearing on FOX News Sunday, Gruber argued that the collapse of Obamacare must be blamed on none other than President Trump.

Gruber, an MIT economics professor who is considered one of the architects of Obamacare, made the bold claim during an interview with Chris Wallace on “Fox News Sunday.”

While discussing the House’s passage this week of a Trump-backed bill to repeal and replace Obamacare, Wallace pointed to statistics showing that health care premiums have skyrocketed as insurance companies are fleeing some markets.

Premiums under Obamacare went up 24 percent last year, and the average number of insurers in each marketplace fell from 5.9 to 3.9, Wallace noted.

“Look, and who’s fault is this? Before President Trump was elected there were no counties in America that did not have an insurer. Since President Trump has been elected, and massive…,” Gruber responded.

Here’s the video. Be sure to watch to the end to see Karl Rove dismantle Gruber’s argument.

A few years ago, when Gruber’s comments about American voters became public, the GOP released this video:

Gruber didn’t pick his blame for Trump out of a hat. He has clearly been thinking about this as evidenced by a recent op-ed he wrote for the New York Daily News:

For the past seven years, one of the major Republican attacks on the Affordable Care Act was about the process by which it was passed.

Opponents argued that the law was “rushed” through Congress and “rammed through” on a purely partisan basis. Indeed, anger about this law was focused as much on the means of it getting through as it was on the details of the law itself. I should know; I’ve been on the receiving end of just about as much criticism of the Affordable Care Act as anyone.

The presumptive passage of the Republican alternative to the ACA today illustrates what a hollow and callous argument this was all along. Proponents of the American Health Care Act or AHCA (couldn’t they at least have a more differentiated acronym?) have not only crafted a law that is worse than the ACA along every single dimension; it is also a breathtakingly radical attempt to cram through a massive reform of our health care system.

He REALLY does think I am stupid….

It’s called projection. They see their own shortcomings in everybody else.

notamemberofanyorganizedpolicital in reply to Rusty Bill. | May 7, 2017 at 9:52 pm

Jonathan Gruber: “Lack of transparency is a huge political advantage. Call it the stupidity of the American voter or whatever, but basically, that was really, really critical for the thing to pass.”

Jonathan Gruber: “If any American really believes that Obamacare is going to control costs, I’ve got some real estate in Whitewater, Arkansas I’d like to sell them.”

Jonathan Gruber: “Exploiting the stupidity of the American voter is fun and easy: kinda like squeezing a lemon.”

Jonathan Gruber: “The typical American voter is so stupid, his dog teaches him tricks.”

Gruber deserves to be in Gitmo.

It’s introvert superiority. Introverts are drawn to law, medicine, and academics type careers and they think they are superior. I have an introvert cleaning lady that is trying to charge me $50/hour to clean floors and toilets! She really thinks she’s superior, as do they all. It feels so good to fire one of these assholes, so good to tell one “no, bitch, I don’t want to date you anymore and have you tell me how to do things”. They will marry a guy and never share the interior space of the house he pays for!

It was failing before the election, why is that Trump’s fault? Oh,that’s right, it’s not; it’s because the people didn’t want it but it was foisted on them by the Socialists in Congress, who insisted on passing the law to see what was in it.

ObamaDoggle was failing the moment of its passage.

Remember, Obama suspended many parts of it illegally, to maintain the delusionssssssss until the end of his terms.

Rags, for once you have understated a description.

Indeed, anger about this law was focused as much on the means of it getting through as it was on the details of the law itself.

Sophistry, of course. A bit of rhetorical sleight-of-hand.

The country despises the Democrats for single-handedly foisting this disaster on us.

But it hates Obamacare itself because of its total failure as policy—its inferior coverage and skyrocketing costs.

Obviously, Trump had nothing much to do with either. The Dem ram-job and the law’s functional failure both predate Trump’s appearance on the political scene.

Yes, but blaming it on Bush is worn out.

Gruber – Noun/adjective: To blame one’s own shortcomings and failings on someone else; never admitting your own culpability for anything. Named after Jonathan Gruber, economist and architect of the so-called ObamaCare health care financing law, the first and hopefully only government run Ponzi scheme. On the program’s inevitable failure, tried to shift blame to politicians who weren’t in office at the time of passage; denigrated the intelligence of the citizenry who were nonetheless intelligent enough to stay away in droves. See entry under “Grubering”; further suggested reading can be found under “Quisling”

When the leftist media bubble bursts, the likes of this swine become exposed for the fraud he is.

Rove doesn’t fare much better, either.

Even if it’s been done before, Jonathan Gruber definitely “jumped the shark” here.

Ha Ha Ha! A year or two ago he was telling us it was supposed to fail, that one of its features was to ultimately put everyone into government health care.

notamemberofanyorganizedpolicital in reply to windyfir. | May 7, 2017 at 10:15 pm

Welcome to the VA. The line forms outside.

No surprise here. The Dems were going to blame someone for the collapse of Obamacare. It was set to be the insurance companies, which would have given the Establishment a reason to nationalize the healthcare insurance industry, followed shortly thereafter by the take-over of the healthcare industry through regulation. But, now that Trumpcare is in the works, the collapse can be used to damage his administration.

The problem is that the AHCA [Trumpcare} is not going to stop the collapse of the healthcare insurance industry. It might slow it a little, don’t hold your breath for that to happen. But, it will not stop it. The healthcare system was already unaffordable when the ACA was passed. It would have continued in a death spiral for the next 20 years, until it collapsed. the ACA [Obamacare] was designed to accelerate that collapse to 10 years. For the AHCA to maintain a comparable level of insurance coverage, it will require more and more subsidization every year, to stave off the collapse of the healthcare insurance industry. So, it won’t be collapsing in 2018, if it is enacted before the end of 2017 AND it provides similar levels of federal funding to that in the House version. However, by 2025, it will have either collapsed or, more likely, will have become a largely federally funded insurance program, a la Medicare. Once that happens, the medical care industry will come under price control regulation which will result in lay-offs, facility closures, limits on services and long wait times for those services. We will all receive the same level of service as the VA [or Canada, Australia and the UK] provides.

This sleazy character continues to make the same mistake the Democratic Party as a whole has made: they all ignore the reality that ordinary people can pull up the things they have said and done in the past, and throw those embarrassments up on a screen, for others to see.

This is like blaming the mortician for the deceased’s death.

Trump has so much influence that the 24% increases this year were set last year even before the election.

Democrats blame Trump for the failure of Obamacare when the true reason for its failure was that it was a terribly designed bill written in a vacuum.
>
Democrats blame Trump supporters for being violent despite case after case of Trump supporters holding a rally to show their support and then being attacked by Antifa thugs wearing face masks and carrying makeshift weapons. Up until the Battle for Berkeley, Trump supporters rarely fought back and yet they were always blamed for instigating the violence.
>
Conservatives are continually blamed for hate speech so Leftists demand that hate speech be outlawed. If you dare criticize global warming using data, then they call it hate speech; if you use theology to argue against abortion, then it is hate speech; if you suggest data claims transsexuality is rooted in a psychological disorder, then you are engaging in hate speech; and so forth. If you are liberal and make obscene comments about Trump, then that is humor; if you curse someone out using the most vile language and then threaten them with their lose of their job, then you are merely expressing yourself.
>
The list goes on and on with one obvious constant. That constant is how liberals are engaging in terrible behavior and speech and then blaming conservatives for all the bad things they, the liberals, are doing. Why are so few seeing this?

The non stop Grubering of the American people continues.
After all, they did elect Buraq Hussein Obama twice.
But according to a couple of university professors 2.8 million illegals voted in 2008.
Buraq thanked them in 2016. “If you vote, you’re a citizen.”
That, along with other Obama fables “Bowe Bergdahl’s serving with distinction”
“The deaths of 4 Americans in Benghazi Libya being the result of a despicable internet video rather than some failure of policy”
The weaponizing of the DOJ and IRS against Obama’s political enemies “Not a smidgen of corruption” should merit Obama for some kind of distinction, certainly not the JFK Profiles in Courage Award, see Obama’s red line in the sand in Syria prohibiting the use of chemical weapons.

While they’re at it, how did the Loony Left miss the opportunity to blame the Black Plague, Ice Age, Mt. Krakatoa’s eruption, the great Chicago fire, 1900’s San Francisco earthquake and Sherman’s march to the sea on Trump as well?

Heck, when you’re on a roll (whether Kaiser or Sesame seed) you might as well go all the way?