“The lack of transparency from the White House and Democrat leaders is appalling.” 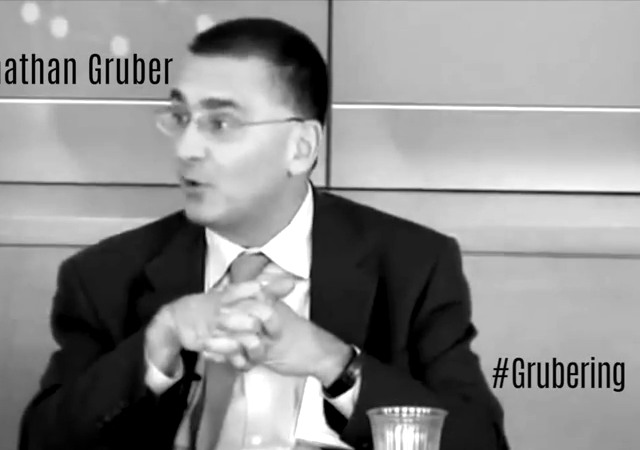 In the wake of the 4th, 5th and 6th new Jonathan Gruber videos, the Republican National Committee has created a new video called #Grubering.

“Gruber’s comments reveal how President Obama and Democrats like Nancy Pelosi took advantage of Americans and violated the trust of voters. Like Gruber, they clearly think Americans are too ‘stupid’ to figure out what’s in our own best interest,” said Chairman Priebus.

“In 2009, Nancy Pelosi encouraged Americans to read Gruber’s ObamaCare analysis, and now she is claiming she doesn’t know who Gruber is. The lack of transparency from the White House and Democrat leaders is appalling.”

Gruber’s insulting remarks have gone viral and even CNN is reporting the story now.

Obamacare architect in 6th video: ‘Mislabeling’ helped us get rid of tax breaks

In a 2011 conversation about the Affordable Care Act, MIT economist Jonathan Gruber, one of the architects of the law more commonly known as Obamacare, talked about how the bill would get rid of all tax credits for employer-based health insurance through “mislabeling” what the tax is and who it would hit.

In recent days, the past comments of Gruber — who in a 2010 speech noted that he “helped write the federal bill” and “was a paid consultant to the Obama administration to help develop the technical details as well” — have been given renewed attention.

In previously posted but only recently noticed speeches, Gruber discusses how those pushing the bill took part in an “exploitation of the lack of economic understanding of the American voter,” taking advantage of voters’ “stupidity” to create a law that would ultimately be good for them.

That last line resonates as a pillar of modern progressivism.

They truly believe they know what’s best for you.

Every one of us who have said all along this was a fabric of lies…top to bottom…have been vindicated this week.

And not just by the economics or the public policy of this tyranny, but by the nemesis of Grubber; his own inability to keep from recording on video tape his self-congratulatory arrogance, coupled with his hatred and disdain of the American people.

A fitting bookend for Pres. ScamWOW.

Precisely correct.
These videos should erase any doubt that the federal government, at least under current management, is the enemy of We The People.

Another prominent public figure argued that lies and deceit are acceptable to trick a stupid public so that their betters can get something done for their own good.

The similarities only begin there.

they are all scattered, uploading the last one and will be posting something (with links to the sources for attribution) to get them into one easy spot.
not counting on them all staying up on utube so am self hosting, we’ve already seen one taken down then put back up by the college involved.

I’m a nobody. I worked in healthcare for 40 years, starting out as a receptionist, ending my 40 years as an echo tech. I knew this wasn’t going to work and said so, loud and clear. I was derided, laughed at, called names, accused of not caring about the “poor people” who don’t wish to buy healthcare, who bought cars, TVs, drugs, alcohol, expensive phones and data plans, etc., etc..

I feel so smart right now.

Poor Jonathan Gruber. Every conservative pleads for libs to get honest, and when Gruber does just that, look how we treat him!

For shame, you Bee Taggers, for SHAME.

This guy is a conservative HERO if you think about it, if only in the way Custer was a Lakota hero.

Name one conservative and/or Republican since Reagan who’s done more for our side than Jonathan Gruber just did, lol.

Can you be a retroactive whistle-blower? 🙂

Not impressed. This is explosive stuff and Reps can’t seem to figure out how to light the fuse.

Part of the problem is there has not been a single evening news story on this on the major networks or PBS/NPR, NYT, etc. WaPo did a front page story but headed it with “Republicans use video for advantage” or something similar.

The cover-up is on.

But all you can do is whine ‘the Reps can’t figure out how to light the fuse,’ as if sitting on your ass on a keyboard is a real contribution.

The ‘pubs haven’t been able to light a fuse since Delay and some others left the scene.

Even if they could get the fuse lit, well, just ask Wile E. Coyote how that worked out. The ‘pubs often wind up mangled and out-maneuvered when they could have taken home the prize. The losses are mainly due to their abject spinelessness.

But maybe they’re getting better, as the last election suggests, except for the party puppet master lukewarm “leadership”. Pat Roberts almost losing a red state was scary. If obola wasn’t so loathed, Roberts would have lost, and we lost PA even in the face of the voters’ obola overload.

MaggotAtBroadAndWall in reply to JackRussellTerrierist. | November 16, 2014 at 9:04 am

Republicans are pathetic. Since the election I’ve heard Rove, Barrasso, and a couple of other GOP Senators talk about how committed they are to repealing the medical device tax. As if millions of Tea Parties and others took to the streets to stop the injustice of unfair taxation of medical device companies located primarily in the Democrat states of MN, MA and CA. And as far as I know Republicans have no plan to cut back any “benefits” financed by the tax, so the revenue that had been expected to be generated by it will simply be lost and the benefits will be financed by adding to the national debt we pass on to our children and grandchildren.

So the Republicans big idea after winning a wave election is to pretend that the public has been clamoring for four years for repeal of the medical device tax. The practical result, of course, is that by repealing the tax it takes the pressure off of six Democrat senators in MA, MN, and CA with the powerful people who run those companies and increases the national debt.

The GOP are a hopeless lot.

That Americans were so STUPID that Gruber felt they needed to lie about Obamacare does NOT make sense. IF indeed we are so stupid, why not be truthful instead and rely upon said stupidity to conceal the truth?

I think the lies were more to provide cover and talking points to the democrats and their collaborators in the media, who would then rely on the stupidity and ignorance of those who are influenced by same.

There is talk of a video #7 coming out today. A much earlier video.

In it, Gruber talks of his highly paid work for the government, specifically the U.S. Marine Corps.

Gruber, talking before a small group, admits he helped the Marines develop intentionally deceiving recruitment ploys to hide the dangers of a career with the Marines.

Gruber goes on to admit in the video that besides the generous fees he received from American taxpayers, he also had a personal ulterior motive.

Gruber reveals that his tactics ultimately helped to convince his cousin, Gomer, to join the Marines.

Gruber is heard to admit that this left him, Gruber, completely in charge at Wally’s Filling Station in Mayberry as the head mechanic. Protests from the crowd, including those by Otis, Barney, and Opie are dismissed by Gruber as akin to grumblings “from my adolescent children.”

He hasn’t changed much in all these years:

haven’t had chance to do all the attributions yet, was more worried about getting them off utube so they don’t get dumped like some were.
will do that stuff tomorrow and add some thoughts/opinions on it.

if you find more comment there and I will upload and add.

Is he Ezra Klein’s real father?

Gruber is so representative of the sneaky, underhanded ideological Left, he could be their Poster Child.

For many people lying and getting away with it would be sufficient. It’s fascinating that wasn’t enough for Gruber, and that he needed others to know of his deviousness and applaud him.

The Grub’s got an itch to be thought of as the smartest guy in the room.

If I had a disowned son, he’d look like Gruber.

Gruber is stupid, the tea party is smart.

2. The actual “stupid” people are the PC masses that go along with Hollywood and the MFM talking points. Those “dogs” now think the tea party is “extreme” because the Dem caucus gets the Schumers and the MFM to “always use the word extreme”. The stupid Pavlovian dogs learned the buzz words and salivate on command.

Smart Americans don’t understand details of 2000 pages of the ACA because it was intentionally obscure and fraudulent. Smart Greta says trying to read it was impossible, because it was such incomprehensible language. And most of the law has been rewritten ad hoc over the last several years.

The smart people did not vote for “God Damn America Obama” either time, and those are not the ones Gruber deceived with his lies. It is the mushy middle that Gruberites deceive, by mocking straw men monsters.

The “stupid voters” Gruber targeted are PC drones that don’t like socialized medicine, but have been conditioned to hate Gruber’s tea party “monsters” more. The ego of the PC crowd wants to feel smart, so a talking point like “the science is settled on global warming” for instance, puts them in with the in crowd, while requiring no real “smarts” about the greenhouse effect, PDO, ENSO, etc.

Gruber’s comic makes him a superhero, and he uses his Massachusetts plan as proof. But he separately admits that plan worked by scamming the rest of America out of a half billion a year, thanks to Kennedy’s influence in Congress.

When socialized medicine theory fails in field testing, the stupid masses are blamed, because academia/Gruber is to them infallible. The comic book lays bare the Gruber fantasy mind set. He is a leftist that does not believe in the free markets that make America work. But his simpleton “The healthy pay for the sick” is just regurgitated “From each according to his ability …”.

And the English lexicon grows: “He’s a gruber.” “CNN is grubering the news again.” “I was grubered by the IRS.” “I’m grubered again!” “Advertising job available – part-time gruber.” And gruber could become a less vulgar substitute for another expression, e.g. “mothergruber”.

OK, for all us ‘mature citizens’ here at LI, let’s compare and contrast the treatment of Reagan’s Budget Director Dave Stockton, when he later said “trickle down” was a gimmick, a “Trojan Horse.” (See: http://rationalrevolution.net/war/trickle_down.htm )

Prof. Gruber is the immoral equivalent of David Stockman, but rather than attack his lies and deception on the national news networks, all we get is . . . . crickets. (Except for Fox News and Talk Radio.)

All this makes you wonder about MIT and academic integrity.
I’ve sent a note to the President of MIT asking if he thinks that Gruber should still be employed by the University, given his actions and statements. If MIT has any standards of intellectual honesty (and they should!), then Gruber has no place teaching students there.