“Let’s remember so the executioner doesn’t get the last word. The last word belongs to the victims.” 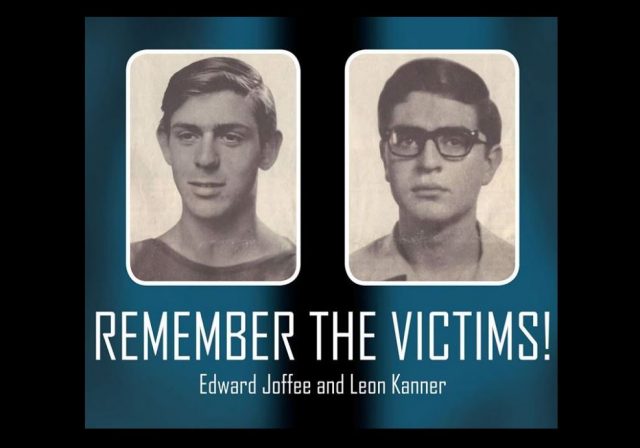 We have covered the case of Rasmea Odeh for the past two and one half years.

Rasmea was convicted of the 1969 supermarket bombing in Jerusalem that killed Edward Joffe and Leon Kanner.

The evidence against Rasmea was overwhelming, and has become even more so with recent video interviews with her co-conspirators who described Rasmea’s involvement. Rasmea’s claim that she only confessed after 25 days of sexual torture is contradicted by the evidence that she in fact confessed after just one day, and there was substantial other corroborating evidence.

The families of the victims issued statements to Legal Insurrection about the plea deal: 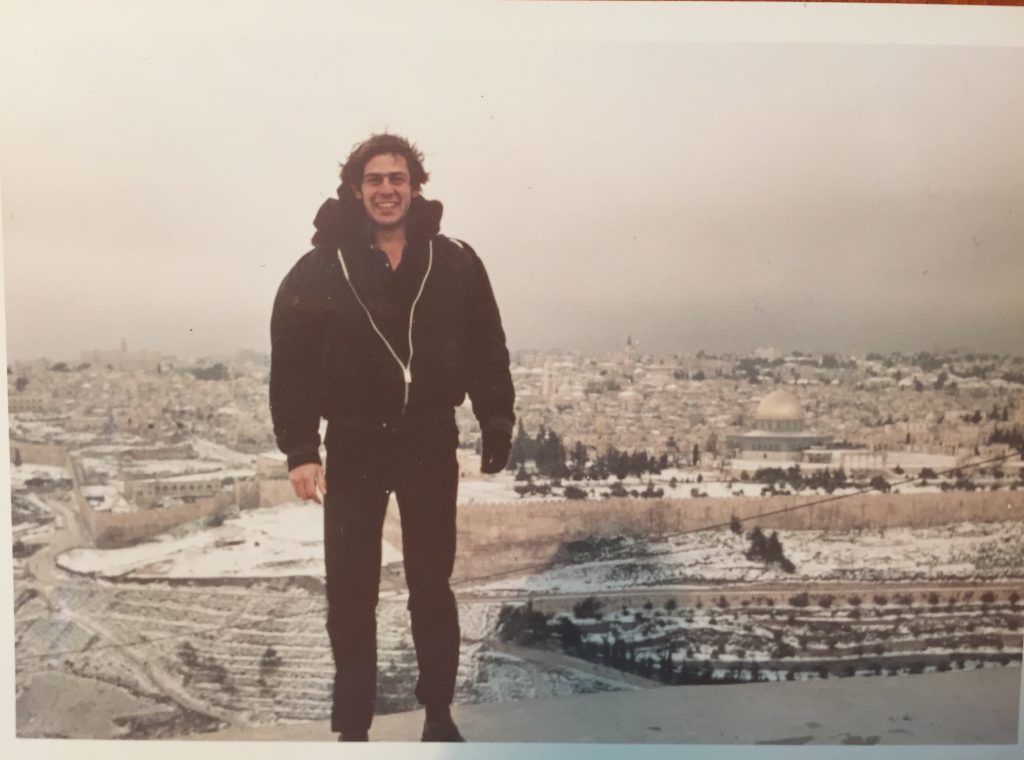 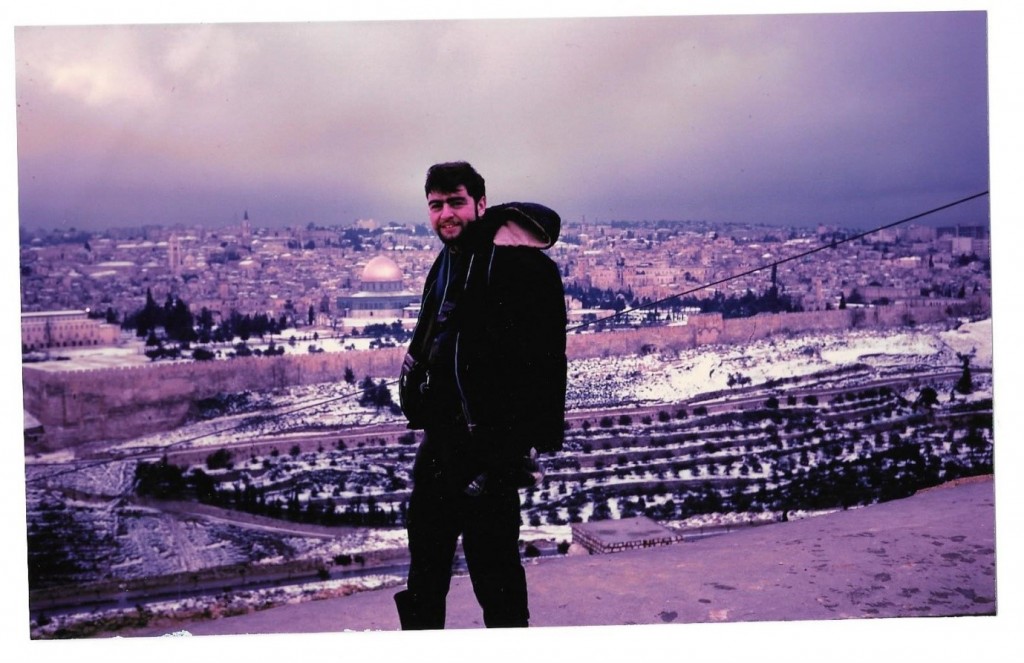 Rasmea has become a hero to the anti-Israel movement, which repeats the claims of a tortured confession despite the evidence otherwise.

JVP honored Rasmea earlier today at its annual meeting. Rasmea was featured on the ending plenary panel, and received a prolonged standing ovation when she was introduced. 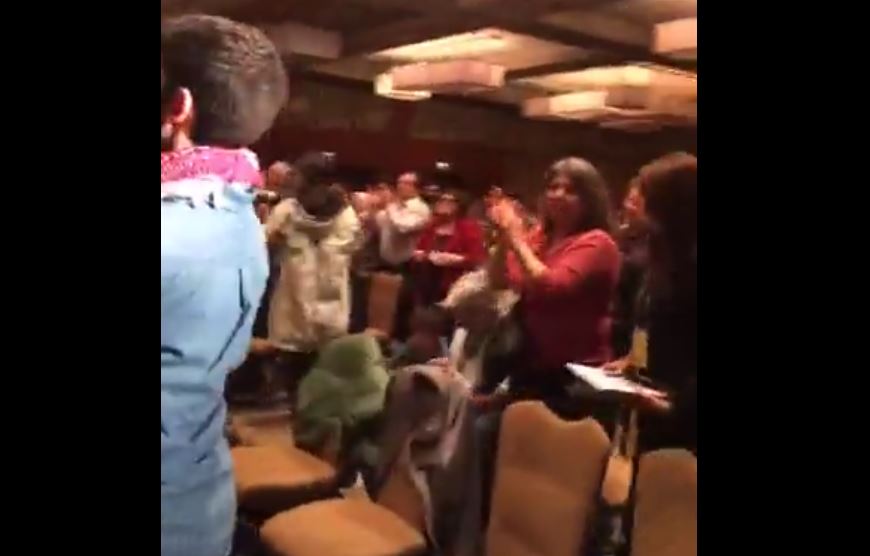 During the speech, Rasmea vowed to continue her fight against Israel from abroad.

While she railed against Israel and the Trump administration, never once during her speech did she deny involvement in the bombing or express condolences for her victims. 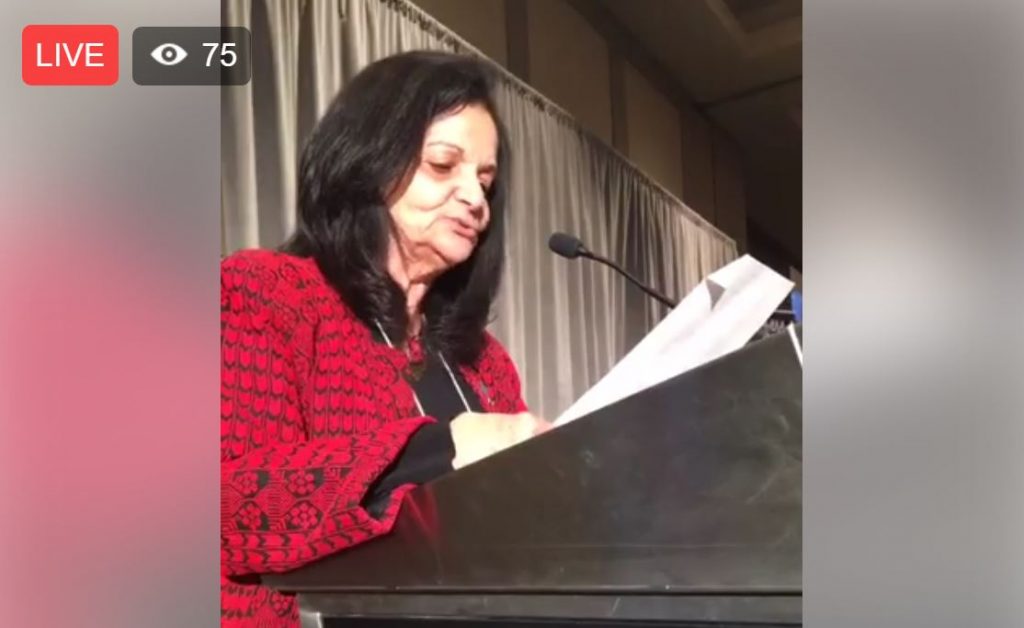 After her speech, Rasmea was warmly greeted by Linda Sarsour, who shared the panel. 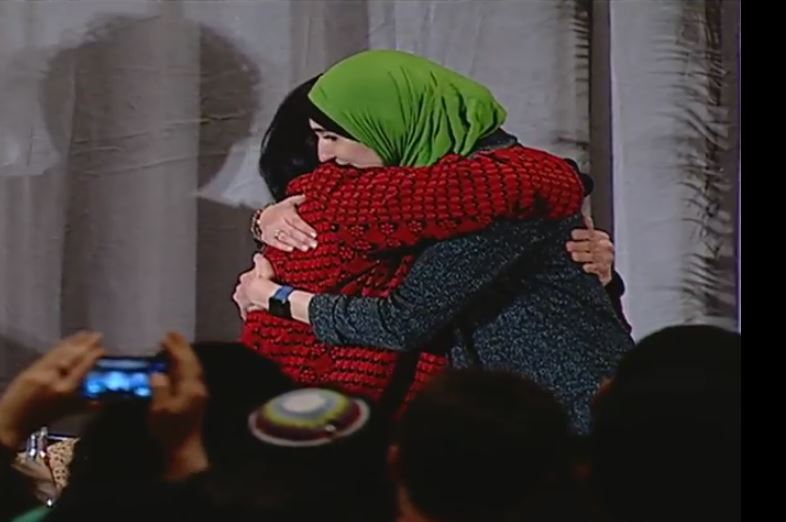 While Rasmea’s panel was in progress, the pro-Israel StandWithUs group held a memorial service for Edward and Leon.

The memorial was held despite JVP’s attempt to prevent StandWithUs from renting space in the hotel where the JVP conference was being held. 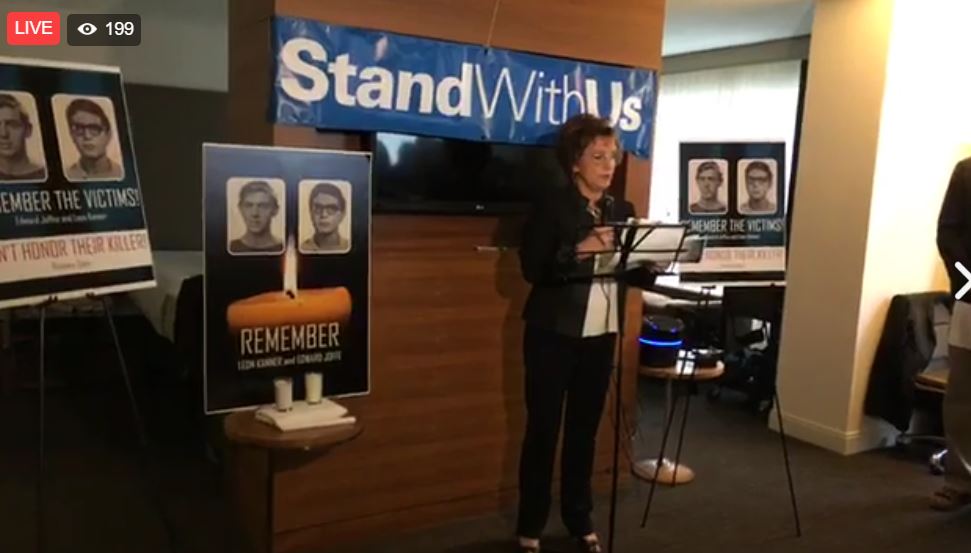 Here is the Memorial Book for the Service: 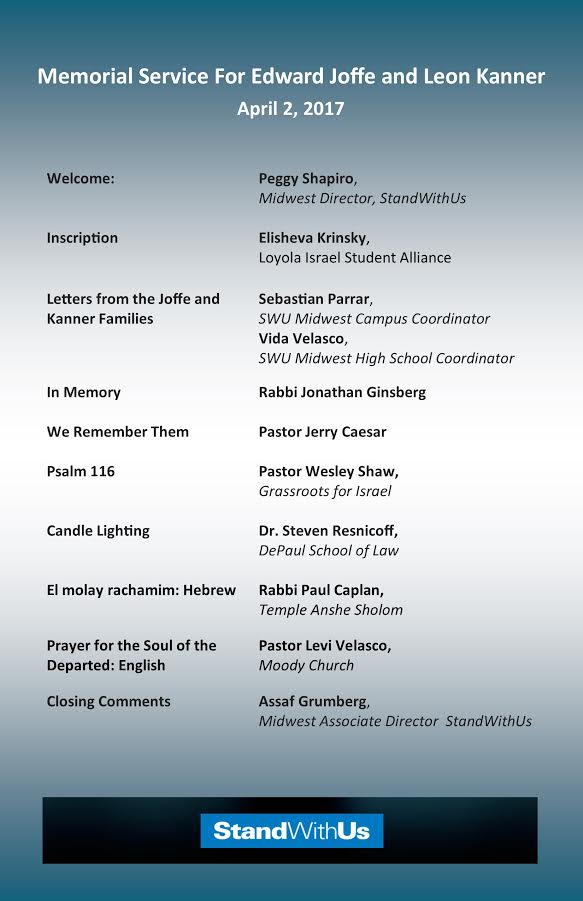 StandWithUs provided the text of the statements read.

Today we gather to remember Edward Joffe and Leon Kanner, their lives cut short and their futures denied. We will hear from their siblings, who today are grandparents. Who knows what Edward and Leon would have been, who knows what gifts they and their children could have given to the world. They were robbed of their lives and futures by a killer who is speaking at this very moment and at this very venue.

Let me tell you a bit about JVP, whose conference is taking place next to us. This group, funded by the Rockefeller Brothers Foundation, is listed as one of the ten most anti-Israel groups in the nation.

They and the killer they are featuring are now trying to repress our memories of the victims. In fact, they tried to prevent this memorial. That is why we must remember them for their sakes and for ours. Simply put, there is too much at stake. This is not only about the memory of two young men, but about the memory of a people. In remembering Leon and Edward, we are defending memory itself.

The killer and her apologists want to silence us because we bring a powerful weapon to this fight for a moral society. We bring memory. They want to create a martyr of a murderer, but our memory gets in the way. They dream of erasing the case and its history, but we remember and at StandWithUs, we speak out.

Her fellow terrorists and sympathizers engage in a worldwide campaign to deny not only recent events but also all Jewish history: They hope to erase the 3,000-year-old Jewish connection to the land of Israel, the Holy Temple, Jewish Kings and Princes, Hebrew prophets and poets, Judean artisans and farmers, and great Jewish rabbis and their disciples in Jerusalem, all of whose souls are bound up in our ancient homeland.

Down the hall from us, they are spreading misinformation about Israel, StandWithUs and everyone in this room. Elie Wiesel once told me, “If millions preach falsehood, there must be at least one voice, however lonely and weak, to call it falsehood.” We together are that voice. We cannot allow the truth to be distorted.
As a daughter of Holocaust survivors, Elie Wiesel’s words ring particularly true for me personally.

This is not the first time we have born witness to those who want to destroy and deny Jewish history. Today when we remember the dead, let’s remember for the sake of living and for the future. We have learned that desecration of Jewish sites, the denial of Jewish heritage, and the murder of Jews with impunity opens the door to a world where no one is safe. Our memory protects the future.

I thank you for being here today to help us remember, to remember and honor the stories of two beautiful young men and to hold dear memory itself—- as memory is our ultimate vindication.

Let’s remember so the executioner doesn’t get the last word. The last word belongs to the victims.

The following words were written and read by Irit, Leon’s sister, in a memorial ceremony held at the Agriculture Faculty in Israel, a few years ago. We would like to share them with you again at this most important stand.

We would also like to thank the people responsible for organizing this ceremony and each and every one of you present here today, it is most meaningful to us.

About a month after Israel’s declaration of independence
In Uruguay, a remote country,
In a village surrounded with vineyards
To a loving family with three daughters
Our little brother was born;
“Leibe” Arye Kanner.

Arye is a new immigrant in Israel,
Who is studying in the Agriculture Faculty,
And was planning a trip to the mountains
Together with Edy, a friend from class.
They were buying groceries for the trip…
And then… in one moment…
The same destiny for both of them,
The worst had happened,
The blast!
Years go by
And each Memorial Day,
When the country remembers its toll,
Mother says: For me every day is memorial day.
When the physical time distances itself
The emotional time becomes more intense
The distance has no time… it has a star.
And the star shines
And carries life within
Of a curious and thoughtful child.
And the star lightens his face,
And you can hear him sing and play his guitar, which is still here.
And you can see his eyes, adjusting the camera lens,
Turning on the movie camera and receiving an award for first time filmmakers.
And the star shines,
And shows his sensitive and good heart,
Embracing his parents with flowers in his hands.
What does the star say?
That he was too young, not even twenty,
That he wanted life.
That we shouldn’t live with the fact that hatred between two peoples determines fate.
And the star prays,
That the strongest of memories will remain in our hearts,
More love and more hopes.
When the physical time distances itself
The emotional time becomes more intense
In the distance there is no line, there is a star…

​LETTER FROM THE JOFFE FAMILY:

“On behalf of all the members of the Joffe Family I want to express our deepest gratitude to StandWithUs, your Board of Directors and members, and especially your tireless Midwest Director Peggy Shapiro for organizing today’s memorial service.

We are also profoundly thankful to the members of the clergy, from all denominations, and the many other friends, who have made the time to attend today’s event.

How fitting it is, that while another deeply misguided so-called “Jewish” organization, at its annual conference here in Chicago, has chosen to honor and glorify a convicted terrorist, you have chosen instead to hold a memorial service for her victims, my late brother Edward Joffe and his friend Leon Kanner, zichronam liv’racha.

Odeh has now signed a plea bargain agreement in which she pleads guilty to the immigration fraud charges that have been brought against her, and hopefully very soon she will have her US citizenship revoked and will be deported to Jordan. She will soon be forgotten by her supporters who have so misguidedly championed her, but the memory of Edward and Leon will live on forever.

Jewish Voice for Peace, Rasmieh Odeh, Stand With Us

It’s amazing that Nazi propaganda genius Joseph Goebbels didn’t come up with “Jewish Voice for Peace” – it would have made the Holocaust so much easier for the Reich.