Rasmea Odeh was offered similar plea deal three years ago – why is she taking it now?

Rasmea Odeh was offered similar plea deal three years ago – why is she taking it now?

Rasmea would lose not just her liberty and citizenship in re-trial, but also her life narrative of victimhood.

The immigration criminal charge resulted from Rasmea’s failure to disclose her conviction and imprisonment in Israeli in 1970 for bombing a supermarket killing two students, Edward Joffe and Leon Kanner, and for the attempted bombing of the British Consulate.

Under a superseding indictment filed last year, Rasmea also was charged with failing to disclose her membership in a terrorist group, the Popular Front for the Liberation of Palestine, and engaging in terrorism. That superseding indictment meant that at the re-trial, all of Rasmea’s terrorist activities would be part of the prosecution. No longer would the case be just about non-disclosure.

Under the terms of the plea deal as described by Rasmea’s defense team, Rasmea would surrender her U.S. citizenship and be deported (likely to Jordan initially). But Rasmea would not have to serve any prison time (she was sentenced to 18 months after her first trial).

The federal prosecutors have made no public statement confirming the terms of the deal, and the prosecutor’s Public Information Officer declined to comment in response to my inquiry.

Nonetheless, assuming Rasmea’s defense team accurately described the terms of the plea deal, this represents a devastating loss for Rasmea, who will lose the benefit of her lies: U.S. citizenship and residency.

For Rasmea’s supporters, this also is a huge loss. They have built an activist movement around Rasmea’s supposed innocence of both the immigration charge and the underlying Israeli conviction. Rasmea has been thrust to the forefront of such movements as Black Lives Matter and the Women’s March. Now that supposed innocent icon of struggle will admit her guilt on the immigration charge in open court on April 25, 2017.

For months Rasmea’s supporters had been predicting victory at the re-trial, primarily because this time the court was going to allow Rasmea to present her PTSD defense. That defense asserts that because of 25 days of alleged Israeli torture in 1969 that caused her to confess (that’s a false claim, as we have documented), Rasmea suffered PTSD that caused her to misunderstand the simple questions on her immigration forms about whether she “EVER” (caps and bold on original form) was convicted or imprisoned.

Rasmea’s defense team and supporters bragged that in the re-trial the PTSD defense would permit Rasmea to put Israel on trial.

Rasmea supporters are spinning the plea deal as a victory because it does not involve jail time.

The Rasmea Defense Committee announcement of the plea deal stressed the lack of jail time. There are so many falsehoods in their narrative that it’s hard to get a clean excerpt, but here’s the part on jail time (bold in original):

Under this current, racist political climate, and facing 18 months or more of imprisonment, as well as the possibility of indefinite detention by Immigration and Customs Enforcement (ICE), Rasmea has made the difficult decision to accept a plea agreement. She will plead guilty to Unlawful Procurement of Naturalization, lose her U.S. citizenship, and be forced to leave the country, but will exit the U.S. without having to serve any more time in prison or ICE detention, a victory, considering that the government had earlier fought for a sentence of 5-7 years.

The Electronic Intifada, which has been a big supporter of Rasmea, also stressed no jail time:

The lack of jail time was stressed by The Arab-American News: 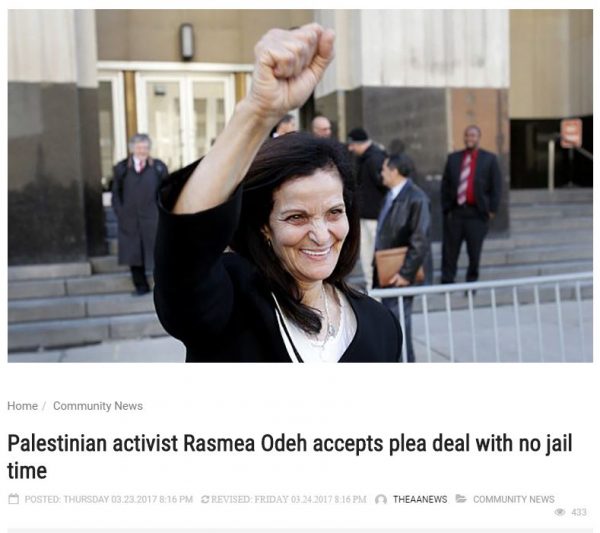 The significance of no jail time has crept into more mainstream news accounts as well, such as this Washington Times article in which I am quoted, Plea deal: Rasmea Odeh, convicted terrorist, agrees to leave U.S. in exchange for no jail time:

“She was convicted of immigration fraud in the first trial, and would have been convicted in the re-trial,” Mr. Jacobson said in an email. “Her new defense that PTSD caused her to falsely answer simple questions on her naturalization papers about past convictions and imprisonment was laughable. Rasmea and her supporters invented an alternate universe based on hatred of Israel, but alternate universes tend not to do very well in court when faced with real world evidence.” ….

“Rasmea supporters are portraying this as a victory, but that is just spin,” Mr. Jacobson said. “This is a devastating defeat not only for Rasmea, but for the anti-Israel activists backing her. By taking a plea, she sold out her supporters, just like she sold out dozens of her fellow terrorists when she confessed to the deadly supermarket bombing in 1969.”

So is the lack of jail time really the result of Rasmea’s steadfast fight against the charges. Did the prosecution vindictively seek 5-7 years?

The Prosecution just filed its Sentencing Memorandum (full embed below), seeking an upward adjustment from the sentencing guidelines (15-21 months) based upon Rasmea falsely testifying in court about her innocence in the supermarket bombing and defiance of the Judge’s Order that she not testify in court about supposed torture since the basis of the conviction was irrelevant to the immigration charge.

That Sentencing Memorandum contains devastating new details and evidence of Rasmea’s complicity in the bombing and her close ties to leading terrorist figures, including new video links. It will be interesting to see how the Judge reacts to this evidence, since after a pre-trial hearing on Rasmea’s claim of PTSD (which he rejected as a defense), the Judge found that Rasmea’s claims of confession after torture were “credible.” But the Judge did not have all the evidence, and the evidence shows that Rasmea attempted to dupe the court.

The Judge found that the prosecution was correct as to Rasmea’s perjury and disobedience to court instructions, but declined to increase the sentencing guideline. Instead, the Judge imposed a sentence right in the middle of the guidelines.

Second, and most important, early on in the case the prosecution offered Rasmea a plea deal very similar to the one she now is taking. Most of Rasmea’s supporters, the ones who have not been around since the beginning, probably are not aware of this prior prosecution plea offer.

That original plea deal would have stipulated to submitting the plea to the court with a sentencing guideline of 0-6 months. The transcript of the May 21, 2014 plea hearing is embedded at the bottom of this post. In it, Rasmea demanded that her original attorney be replaced because she (incorrectly) felt that he was pressuring her to take the plea.

Here is part of the transcript (pdf.):

THE COURT: Okay. And, Mr. Swor [Rasmea’s attorney], did you — I’m sure you did, but I’ll ask, the record. Did you go over with Mrs. Odeh the fact — the facts of the government’s plea offer which created a guideline range of zero to six months which prevented a sentence above the six months and which also provided that if there were to be a guilty plea that there would be no government action with regard to removal of Mrs. Odeh from the country for a period of time? …

MR. SWOR: Either after imposition of sentence or after completion of custodial sentence, if one is imposed.

THE COURT: Right, that — so if there were either a sentence or no sentence, that the government would permit her to 180 days to facilitate her travel arrangements from the country rather than the usual situation, I think — well, is there a usual situation or is there not a usual situation?

Thus, Rasmea was offered a plea deal which she rejected in May 2014 which held a very high likelihood of zero jail time, plus six months to stay in the U.S. after the plea to arrange her affairs before leaving the country.

Rasmea rejected that deal, and now she’s accepting a nearly identical deal. The only difference (based on what’s been disclosed) being that Rasmea now is guaranteed no jail time, whereas before jail time was highly unlikely and at worst would be a few months.

So why did Rasmea take the deal now and not earlier?

The prosecution, under the expanded Superseding Indictment, was going to expose all of Rasmea’s terrorist activities, including with regard to the supermarket bombing.

The prosecution almost certainly has more evidence than has been disclosed in open court, and even has requested court permission to take testimony from Rasmea’s co-conspirators who now live in the West Bank. Those co-conspirators have stated on video interviews long after release from prison that Rasmea was involved both in the PFLP and in the supermarket bombing.

In short, Rasmea likely took the deal this time because she now understands that her charade is up, that the prosecution was going to burst the bubble of Rasmea the Victim.

Rasmea would lose not just her liberty and citizenship in the re-trial, she would lose her life narrative of victim.

This is still a great outcome for the USA, no matter how liberals spin it. Thanks for covering the case. Hopefully this & the immigration orders will help deter any other “palestinians” that are thinking of coming here and making a living off of the left’s hate & ignorance.

Disable adblock plus on this site, and it will become visible.

A good Federal judge, and…

a good set of prosecutors.

Despite the raving BS we so often see here.

Depending on the nature of the agreement, Federal Judges are not bound by plea agreements at sentencing.

If the agreement is simply an agreement for the Government to recommend no jail time, the Judge is not bound by the recommendation and after Odeh has pled guilty, she would generally not be allowed to withdraw her plea.

If the agreement is that the Government drops all charges after she renounces her citizenship and is deported, then the Judge will be powerless to prevent it.

Rasmea would lose not just her liberty and citizenship in the re-trial, she would lose her life narrative of victim.

Too bad they let her escape. Now, her despicable narrative survives.

Would Ramea Odeh be able apply for Visa to then reenter America if say another Leftist like Chelsea or Warren gets elected PotUS??

I still say the nasty, left wing skank needs to leave in a bodybag.