“Everything indicates an act of terror.” 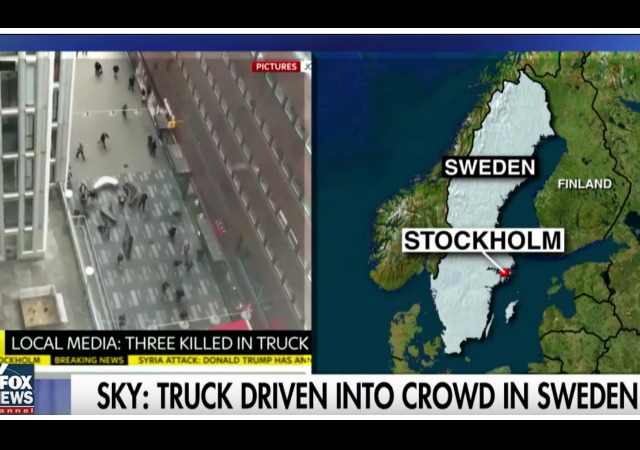 A man plowed a truck into a shopping center in Stockholm, Sweden, killing at least five people and injuring many more. Swedish Prime Minister Stefan Lofven has called it a terror attack:

“Sweden has been attacked. Everything indicates an act of terror,” PM Stefan Löfven said at a press conference on Friday afternoon.

“The government is informed and doing everything to help authorities with it.”

Swedish company Spendrups told the media that someone hijacked one of its trucks earlier this morning:

“It’s one of our distribution vehicles which runs deliveries. During a delivery to the restaurant Caliente someone jumped into the driver’s cabin and drove off with the car, while the driver unloads,” communication director Mårten Lyth told the TT news agency.

Someone then drove that truck into a crowd at the department store Ahlens Mall.

Authorities have arrested one person:

However, the police stated that they have not arrested anyone in connection to the attack.

Sources have told Sky News that authorities have started to search for another suspect. They believe he ran “towards an underground station.” The suspect is “wearing a green jacket, white shoes and a grey hoodie.”

They have released this image of the suspect:

A few people have spoken to the media about the attack:

Another witness described the panic, saying: “I went to the main street when a big truck came out of nowhere. I could not see if anyone was driving it but it got out of control. I saw at least two being run over. I ran as fast as I could from there.”

One witness said: “When I came out I saw a lorry standing there, with smoke coming from it, and there were loads of bits of cars and broken flower pots along the street.”

Another witness said: “People are lying mowed down along the whole route. CPR is being given and rubbish bags are being used to cover the lifeless bodies.”

The Swedish news agency TT said several people have been rushed away in ambulances, and live television footage showed smoke coming out of the department store that the truck smashed into

A witness told TT news agency: “I also saw people with blankets over them,” he said. “The whole body was covered.”

Leif Arnmar, who was working in the department store, told Swedish national broadcaster SVT: “There is total confusion. I do not know how many are injured. Many people are totally shocked.”

People continue to flood social media with pictures and video of the attack:

Something's happening on Drottninggatan and around Stockholm. pic.twitter.com/YPbrZSe5Mb

A vehicle was driven onto a street full of pedestrians in Stockholm, Sweden, police say. Injuries reported https://t.co/V8j4adv4wl pic.twitter.com/Q7Gap27Nev

Swedish Prime Minister Stefan Lofven says "Sweden has been attacked, everything indicates this is a terror attack" pic.twitter.com/eBgKtxn1NP

Terrorists have recently used trucks in their attacks. Here are a few of them:

A Palestinian terrorist killed four people in Jerusalem in January:

Four people have been killed when a Palestinian terrorist rammed a truck into a group of Israeli officer cadets on an educational tour waiting to board a bus in a parking area in Jerusalem. The driver drove the truck back and forth over the bodies.

The attack comes as Palestinian leaders have ramped up incitement in advance of Donald Trump taking office, with threats and predictions of violence from the highest levels.

A terrorist drove a truck at a Christmas market in Berlin, Germany, in December. The attack killed twelve people and injured 50 more. The police arrested a suspected and called it a terrorist attack:

Ariel Zurawski, owner of the truck company, told TVN 24, a private Polish television news network and CNN affiliate, the truck, carrying a steel shipment, may have been hijacked.

Zurawski said his cousin — the truck’s regular driver — couldn’t have been behind the wheel and wasn’t the man who ran from the scene.
“My scenario is that they did something to him and hijacked this truck,” he said.

Witness Emma Rushton told CNN that the truck didn’t slow down. She said the truck was traveling about 40 mph through the crowded pedestrian area.

“There’s no way it was an accident,” Rushton said. “We saw at least 10 people” injured and lying on the ground.

Last July, a terrorist used a truck to kill 84 people in Nice, France:

“The investigation underway since the night of July 14 has progressed and not only confirmed the murderous premeditated nature of Mohamed Lahouaiej-Bouhlel’s act, but has also established that he benefitted from support and accomplices,” Molins told a news conference in Paris Thursday….

No, silly. This is Sweden. Ergo, Lutherans. Duh!

Reuters. Swedish authorities say, “We may never know what motivated Omar Mohammad, Muhammad ibn Zubair, and Mahmoud Muhammad abdul Wassim to commit this act.” Authorities later added the three Muhammads seem to have nothing in common except strong aversions to pork and alcohol. Swedish police are at a loss to explain this. Cultural or familial links have been ruled out as one of the assailants was a Somali, another a Pakistani, and the third Tunisian. All entered the country and were granted asylum as Syrian refugees.

To paraphrase Mark Steyn, we need a “three Mohammeds and you’re out” rule.

The three Mohammads are believed to be members of the American Tea Party, from unconfirmed reports that they were heard shouting “Don’t Tread on Me!”

Reuters. 27 people associated with the largest mosque in Malmo have been arrested for providing support to the three Muhammads who committed what Swedish police are calling a “lone wolf” attack. Authorities continue to investigate if these three lone wolves who attended the same mosque had anything in common.

To avoid further attacks people are directed to be in groups no larger than three after receiving permission to leave their homes. This only applies to long time residents of Sweden as no such attacks occur in the autonomous Islamic zones in Sweden… which continues to puzzle authorities.

Probabaly just mentally ill, nothing there, as usual.

The Islamic Truck of Peace.

Hey, it was just that the driver of the stolen truck hadn’t been made aware of the Swedish driving laws yet and as soon as he completes the school he will apologize.

Sweden will just import more Muhammad’s to prove how welcoming they are to the world.

I think the truck was radicalized.

A commercial truck is just a breed away from SUV, and we know how those are.

Gee, it was first only sexual abuse. Then it turned into burning down houses and assaulting Swedes. Next it morphed into “no go” areas throughout Sweden where only Muslims are allowed and Sharia law is practiced. Now we see terrorism in the form of hijacked trucks used to kill innocent civilians that pay the taxes and elect the officials that brought the Muslims to Sweden and pay for them to stay.
>
I wonder why will be next? More terrorism that is even worse and more heinous? The government admitting that Muslim immigration was a bad idea. Expulsion of Muslim immigrants? War?