Pro-Israel StandWithUs prevented from arranging memorial at hotel where JVP is holding its annual meeting featuring the convicted terrorist.

Rasmea Odeh, a military member of the Popular Front for the Liberation of Palestine, was convicted in 1970 in Israel for the 1969 bombing of the SuperSol supermarket that killed two Hebrew University students, Edward Joffe and Leon Kanner. Rasmea also was convicted of the attempted bombing of the British consulate.

Rasmea faces a re-trial in May 2017 on immigration fraud charges, based on her failing to disclose her convictions and imprisonment for the bombings, and her involvement with a terrorist group.

Despite the overwhelming evidence of Rasmea’s involvement in the supermarket bombing, including video statements for pro-Palestinian documentary films by Rasmea’s two co-conspirators, Jewish Voice for Peace has been one of Rasmea’s strongest supporters.

These key posts of mine summarized the evidence:

JVP is a left-wing anti-Israel group which is at the forefront of demonizing and dehumanizing Israelis, including through the Boycott, Divestment and Sanctions movement.

We covered Rasmea’s connection to JVP and the evidence supporting her conviction for the supermarket bombing in our recent post, Jewish Voice for Peace’s long embrace of convicted terrorist Rasmea Odeh.

Rasmea will be a featured speaker at the 2017 annual meeting of Jewish Voice for Peace in Chicago, March 31st – April 2nd. 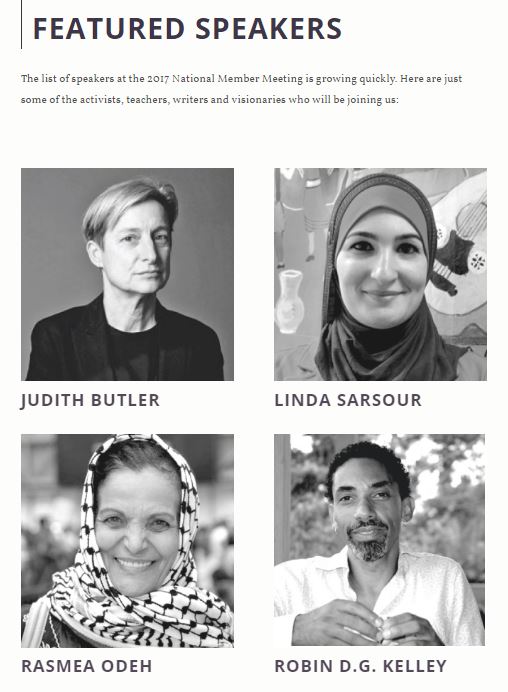 That has let to substantial controversy, and has been covered widely, including at Algemeiner, Jerusalem Post, Chicago Tribune, Daily Caller, Washington Free Beacon, and The Tower, among others. ADL also has commented on the invitation.

The pro-Israel group StandWithUs wanted to rent space at the Hyatt Chicago McCormick hotel where the JVP annual meeing is being held to be used as a memorial to Edward Joffe and Leon Kanner.

But JVP blocked the memorial, according to a Press Release issued by StandWithUs:

Jewish Voice for Peace (JVP), which will give a platform to Rasmea Yousef Odeh, convicted killer of two Israeli students, at their conference March 31-April 2 at the Hyatt McCormick, Chicago, has blocked a request to the Hyatt Hotel to hold a service for her victims.

StandWithUs, an international Israel education organization, asked the Hyatt McCormick to rent a small space for a multi-faith memorial service for Odeh’s victims. The hotel said that they must get permission from JVP for such a memorial and that permission was denied. Hyatt Event Sales Manager Audrey Quevillon responded to the memorial request, “I am very sorry but I just received notice from Jewish Voice for Peace, that your request for space has been denied.” ….

Peggy Shapiro, Midwest Director of StandWithUs, expressed outrage. “Not only is JVP honoring a convicted terrorist at their conference, they have denied a request to hold a memorial service for her victims – Edward Joffe and Leon Kaner. These two young Jews no longer have voices because they died in an attack perpetrated by Rasmea Odeh, and it seems JVP is committed to silencing them even further by refusing to allow us to hold this service in their memory. There is nothing Jewish or peaceful about this disgraceful decision.”

This really is not a big surprise.  JVP, if anything, is likely to double down on its support for Rasmea when faced with this exposure.

Jewish Voice for Peace, Rasmieh Odeh, Stand With Us

Was there anything in the application to rent space that told the Hotel of the potential conflict with the JVP?

“The hotel said that they must get permission from JVP for such a memorial and that permission was denied. Hyatt Event Sales Manager Audrey Quevillon responded to the memorial request, “I am very sorry but I just received notice from Jewish Voice for Peace, that your request for space has been denied.””

Does JVP own this hotel?

“Does JVP own this hotel?” Exactly! Is JVP paying enough to cover rental of all spaces in the hotel? Only if they have booked it all could they possibly have a veto power over content other than in their own rented space.

The Hyatt McCormick management is egregiously taking sides here. Add it to a list of where not to stay or have a meeting in Chicago.

This is all so confusing. The SJW fight endlessly to support those who despise Israel, those who terrorize others, and hold people such as Rasmea Odeh, Che Guevara and others similar, up on a pedestal while simultaneously demanding that we remove statues of Thomas Jefferson and others because they conformed to the standards of their time which is considered wrong by today’s standards. How is it that being a slave holder in the 18th century when slavery was common so terrible while being a modern day terrorist is right and heroic?