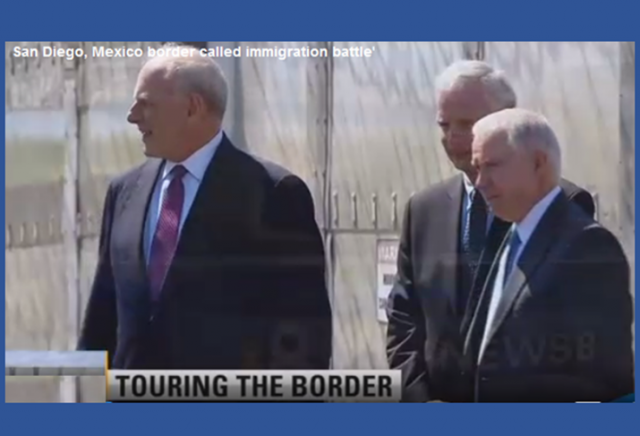 U.S. Attorney General Jeff Sessions made a stop in my hometown on Friday. During the visit, he urged cities and other government jurisdictions with sanctuary policies to reconsider and work with federal law enforcement to identify criminals who should be deported.

The visit comes on the heels of the Justice Department warning the entire state of California and nine other less-than-cooperative areas were at risk of losing funding if they continue to embrace the “Sanctuary City” status.

The Justice Department sent letters to the state of California, Cook County, Illinois, and the cities of Chicago, Las Vegas, Miami, Milwaukee, New Orleans, New York and Philadelphia that demand they provide legal justification for non-cooperation by June 30 or risk the loss of federal funding.

“Sanctuary jurisdictions put criminals back on the streets,” Sessions said in a news conference, in which he detailed the dangers posed by criminal street gangs.

“They help these gangs to refill their ranks, and puts innocent life — including the lives of countless law-abiding immigrants — in danger by refusing to share vital information with federal law enforcement,” Sessions said.

Joining Sessions during his appearance at the border fence close to the Otay Mesa Port of Entry were Homeland Security Secretary John Kelly and Wisconsin Republican Sen. Ron Johnson.

Kelly stressed that the federal government will strengthen enforcement along the border and specifically target smugglers.

“We will continue to expand our approach to deterring illegal migration,” Kelly said. “That includes constructing a physical barrier, supporting it with technology and patrolling it with a dedicated and professional workforce.”

“It also includes our approach of prosecuting anyone who pays traffickers to smuggle people into the country — especially those who smuggle in children, including family members here,” he said. “Human smuggling across our border puts individuals — especially children — at great risk of assault, abuse and even death at the hands of smuggler and coyotes.”

He said he and Sessions wanted nothing more than to “put human smugglers out of business” and “end the flow of illegal migration.”

Not surprisingly, our state’s Trump-challenging politicians are none to pleased with the warning letter from the Department of Justice.

The letter drew a sharp rebuke from state Senate leader Kevin de Léon, D-Los Angeles, who said in a statement that Sessions and President Donald Trump “are basing their law enforcement policies on principles of white supremacy — not American values.”

De Léon grew up in San Diego’s Barrio Logan, the son of a single mother from Mexico.

Asked about de Léon’s comment, Sessions fired back, “I totally reject that. I think that is a deplorable statement.”

Of course, the fact that a significant portion of his family is here under less than legal circumstances could be fueling De Leon’s ire.

No appearance from leading officials in charge of implementing President Trump’s immigration law enforcement policies would be complete without demonstrators with #Resist and “No Wall” signs.

Alliance San Diego and other organizations asked residents who live in border communities what they need from the current administration.

“We are not a war zone. This is a community that is safe and that is thriving,” said Christian Ramirez, Human Rights Director at Alliance San Diego.

“It sends the wrong message to the American people of the border lands. This is an economic engine,” he said.

Ramirez said the U.S. should spend the billions of dollars that would need to be spent to build a border wall on improving ports of entry and improving infrastructure.

Ramirez must have forgotten that our politicians just raised the gas tax in the state to build infrastructure, so there should be plenty of federal money for that big, beautiful border wall.

The [class] diversitists judge people by the “color of their skin”. No progress, negative or positive. Just a status quo that persists.

There is a desperate need for emigration reform.

I am what is generally called “white”, although when compared to things that are actually white, such as the background on this screen, I look light brown. (Does that make me “a person of color”?) No matter; the loons that compare illegal immigrants with those who are here legally are half right, as I do indeed consider myself superior to most of them. Legal immigrants have my whole-hearted support; a few generations back some of my ancestors were immigrants and I am quite proud of them, so it can’t be truthfully said I’m anti-immigrant. Nope, not a bit.

However, and it is a BIG however, every person who comes here illegally casts a pall on those who came here by legal means. They (the illegals) want and actually demand benefits that are supposed to be reserved for citizens and legal immigrants. Having broken various federal laws to get here, they continue on that path of lawlessness taking benefits they are not legally entitled to take. What’s that? You say they can’t live here without those benefits? Okay, I’m a compassionate guy; round them up, deport them back to where they are citizens, and let them try again … legally this time!

Not “white supremacy”; just a light brown citizen, descended from legal immigrants, who is tired of the invaders (well, aren’t they?) coming in here, taking resources they are in no way entitled to, and increasing the tax burden on citizen and legal immigrant alike.