And a bonus update on the State of Legal Insurrection. 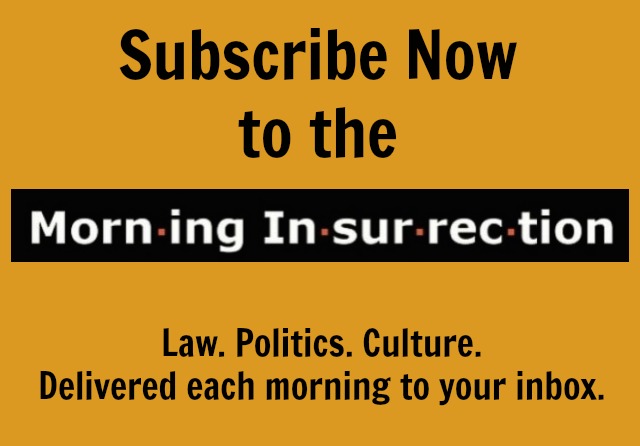 Morning Insurrection is the morning email newsletter we started in July 2014. It arrives at 7 a.m. during weekdays.

, or in the sign up boxes in the sidebar and below each post on post pages. (If you already are signed up, you don’t need to do it again.)

Second, we have a Cyber Insurrection section that provides links to non-Legal Insurrection articles about cybersecurity and high tech matters. This is a feature not present on the website, so it’s unique to Morning Insurrection.

Third, and most important in my mind, is the Quick Hits part of the newsletter where authors post quick thoughts and information about the news and their own lives. Particularly for authors like Prof. Miriam Elman and David Gerstman, who are not daily contributors at the website, it gives them an opportunity to opine on recent events and issues that you will not see on the website.

I tend to use the Quick Hits section of the newsletter to update readers on events going on in my life, and observations on events that I don’t necessarily mention on the website because there’s not place for me to do so. So, for example, I might mention upcoming speaking engagements, people I’ve met, past posts I’ve been thinking about, and so on.

But wait, there’s more: A lifeline

I’ve been thinking about the role of the newsletter in light of the unexpected shutdown of our YouTube account based on unfounded copyright claims. Thankfully, the account was restored after we were able to mobilize people on Twitter, and file the necessary legal papers with YouTube.

That emphasized for me how precarious our ability to communicate with others is on the large social media websites. Many people have been shut down by Twitter, Facebook and YouTube. We will continue to use them because there is no substitute, but having the ability to communicate via email with readers is a safety valve. It’s something we haven’t focused on before, but want to do in the future. Morning Insurrection may, on select occasions, serve the function of sending alerts to readers or having special issues devoted to a particular topic.

So Morning Insurrection is not just interesting and useful, it’s a lifeline in an age of social media shutdowns.

How are we doing?

I’ll use this as an opportunity to opine on the State of Legal Insurrection.

We’re doing quite well in terms of traffic. For reasons I don’t fully understand, our traffic is up dramatically after the election. January 2017 was the second best month EVER in the 8 year life of Legal Insurrection, with over 2 million page views (the best month was the month of the George Zimmerman trial, at over 3 million views).

Putting aside some surge days, when a particular post gets hot, on an “ordinary” average day we’re up almost 15,000 page views per day.

A huge driver is mobile (phones and tablets) which account for over 60% of our new visitors, visitors, and page views. That’s an extraordinary percentage.

I’m considering a weekly (or more frequent) series of videos where I get to speak directly to readers about various issues, perhaps responding to written questions. We’re just exploring the technology for it. I want it to look professional in appearance, not like one of those crazy people on YouTube shouting at people. Though considering how well crazy people on YouTube do, may I should reconsider format. What do you think?

I also sense that our name recognition and appreciation of the website in the broader community has increased. It’s anecdotal, but it seems that more and more I’m hearing people I wouldn’t necessarily think were aware of us comment how much they like the website. One reporter for a major newspaper called me for comment on an issue, and mentioned that she had been reading the website for a long time. I was like, really?, I alway felt we were shouting into the darkness. She assured me we weren’t just shouting into the darkness. And there are many other similar anecdotes.

It’s exhausting though, I have to admit, for everyone involved. I thank all our editors and authors for their efforts.

On a personal note, my wife still struggles, and it’s been emotionally taxing. But we have each other, so that’s that.

You’d probably like my dog, Romeo, who is a gentleman. And Lolla who is a slut. I love them both dearly.

Some dogs name themselves.

I have to keep a chain on Lolla because, Puppies!

Your point about the New Big Social Media Bigwigs is well-taken. They kick you off, then you’ve got a fat lot of nothing. So I signed up for the newsletter.

Also, I forgot: about the videos. You’re right, Professor, a lot of the YouTubers are doing fine with not much. I do like the Diamond and Silk background. Well-appointed apartment or home…. Cheesy is okay, as long as it’s neat. Try to avoid the wide angle look that makes someone’s nose look large.

Well, I tried, but I got this: “Too many subscribe attempts for this email address. Please try again in about 5 minutes. (#8889)”

Huh? Someone else trying to subscribe using my email address? That doesn’t make sense.

Sounds like a Bill Gates type of error message.

I’m shocked! Shocked, I say. The day of the article about Texans and their love of trucks wasn’t the biggest day of 2016.

The newsletter is nice to read in the morning.

Thanks, Professor, for this update and all the details.

That’s how I got here… wow – it’s been SEVERAL YEARS.

Professor…”For reasons I don’t fully understand, our traffic is up dramatically after the election. “….?

It is because of the election results, that I fully understood that Lawfare would be next. It is, along with felony rioting.

Where else would I go but here?

My most grateful thanks to all your diligent contributors.

I’ve been a subcriber since I first dicovered your daily email service. LI emails are the first thing I open each morning. [With apologies to Scott Adams, whose emails have fallen to #2.]