Our account and videos are restored, but substantial damage was done. 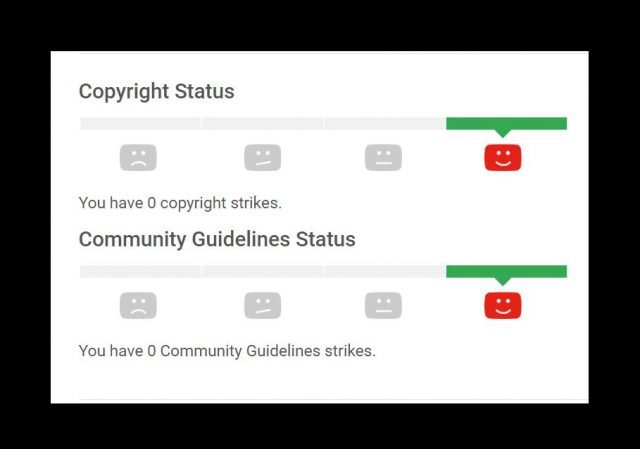 YouTube took down Legal Insurrection’s Channel without any prior notice based on “multiple third-party claims of copyright infringement,” but we never received any claims of infringement.

We have lost hundreds of videos, including a lot of original content on important news subjects. You now will see disabled videos in hundreds of our posts.

I have no idea what the supposedly offending videos are. We are pretty careful when it comes to copyright, so I’m suspecting that someone about whom we posted a video made the claims.

We’ve filed the appeal forms, but if anyone has a contact at YouTube, I’d appreciate the help.

No one had contacted me indicating that there was an alleged copyright violation. I was not contacted by the supposed copyright holder or by YouTube.

I put out a call for help on Twitter, and many people responded, while I tried to figure out what to do: 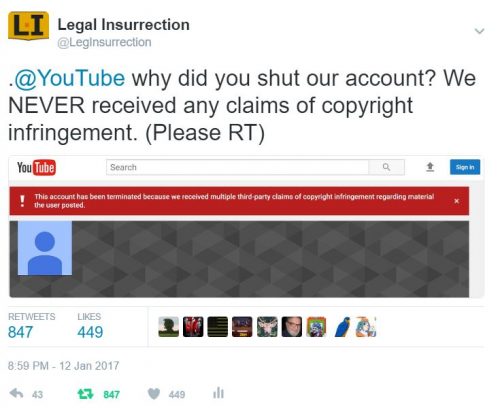 The following day, we found out that three (3) Digital Millennium Copyright Act (DMCA) takedown notices were served on YouTube, triggering YouTube’s “three strike” rule and leading to our entire account being removed. Including My 20 Favorite Videos that almost disappeared from the internet, like this one, which has over 750,000 views:

The video excerpts were very important sources of information to support our reporting. But the main anti-Israel group within MLA was upset that we used the audio excerpts, and we know that that group complained to MLA on Twitter (and perhaps directly?) about it. 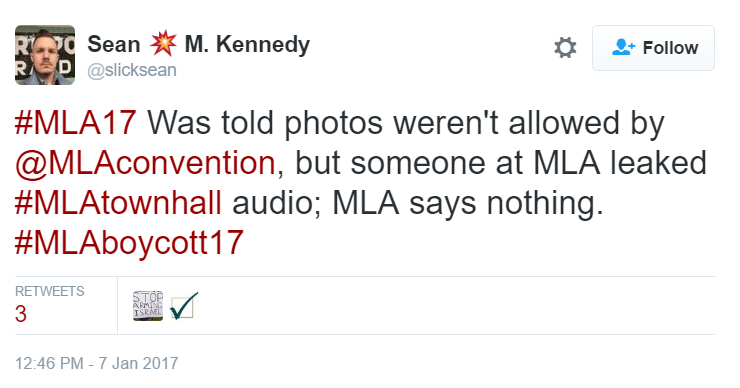 Our YouTube account was restored after a public uproar (thank you!), widespread news coverage, and our filing of “counter-notifications” under DMCA.

Dennis Prager, Lars Larson, and others, were kind enough to have me on their shows to talk about what happened:

The removal and restoration of our YouTube account did not end the problems. We still had three (3) videos removed and if our counter-notification was not sustained by YouTube, we still could lose the account.

These are the first three videos that MLA managed to get taken down on January 12.

After we filed a counter-notification the videos were restored after YouTube’s review, but not until January 28.

This first video shows how the arguments used by Israel boycotters mirror arguments made against the United States. Yet the boycotters don’t boycott themselves.

This second video, against the boycott, perfectly summarized the internal tensions in the progressive movement — every argument made against Israel could (but isn’t) made against U.S. universities, leading this professor to call BDS a neoliberal fraud:

In this third video, a professor from Texas who researches issues related to genocide described how the boycott resolution proposed at MLA would hinder his work, demonstrating that BDS is not a victimless crime. Real scholarship suffers.

During a critical stage of news coverage and public debate over the MLA debate, these videos were unavailable because of MLA’s takedown notices.

But it wasn’t over.

On January 20, I received notice that MLA had filed ADDITIONAL takedown notices as to 8 additional videos, which were taken down. We filed counter-notifications. The videos were not restored until February 3, after YouTube review.

In this video, a professor expresses concern over the obvious anti-Semitic nature of BDS, mockingly asking whether if the resolution passed, only the Jews at Israeli institutions should be boycotted.

In this video, a professor who works with Israeli Arab women criticizes the boycott resolution because it would damage the educational opportunities for Palestinian women in what is a highly patriarchal and oppressive society.

This next one was pretty disgusting. A professor who identified as Palestinian defamed Jewish Americans for supporting Israel. This ugly underbelly of BDS is not often caught on audio or video because it’s not the face BDS wants to show to Western liberals, but it’s there. And now you can listen to it, over MLA’s objection.

In this video, a professor made a point about how the MLA was being hijacked to use against Israel. This is a point I have made often, and demonstrates that at least some MLA members had wised up to the tactic.

In this clip, a far leftist Jewish professor from Nassau Community College calls opponents of BDS “Judenrat” (the term used for Jewish councils that allegedly cooperated with the Nazis). This disgusting libel is important to hear, not just read, because you can hear the hatred behind BDS and advanced by some leftist Jews.

In this audio, a professor talks about how the boycott would hurt her research and teaching on Jewish Studies.

This professor warned that BDS was a slippery slope, and that having to justify and defend Judaism was how the Spanish Inquisition started.

In this clip, esteemed professor Cary Nelson from the University of Illinois describes how BDS is a misdirection and is counter to legitimate peace efforts.

At the time these videos were taken down, the news cycle regarding the MLA boycott resolution defeats was still in full swing. Yet these videos, and the three in the first group, were not part of that news cycle and public discussion.

Legal Insurrection’s news coverage had blank, non-functioning videos when reader interest was at its peak.

Where are we now?

We now have NO STRIKES against us, the exact position we were in prior to MLA’s actions. 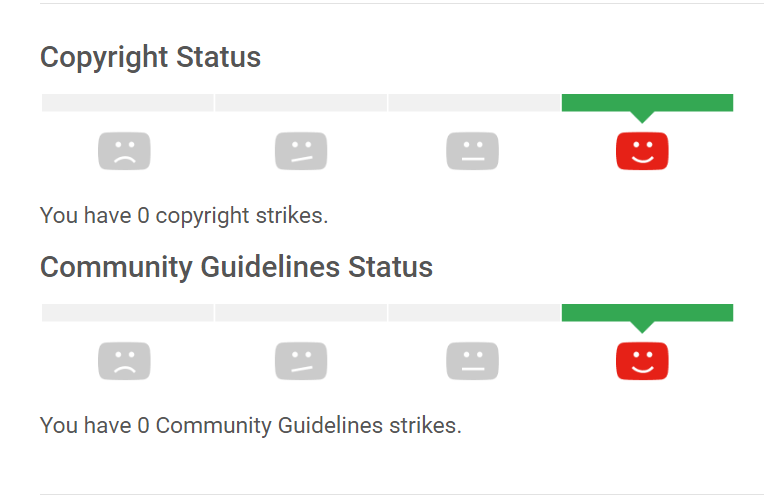 The initial storm may have passed, but the damage done is far from over.

We did nothing wrong, yet I had to scramble to salvage the account, to wake up supporters on the internet, and to interact with YouTube trying to work through the issues. All this at a time when I was dealing with a continuing serious immediate family health problem, of which readers were aware.

MLA’s actions also changed the way we do news reporting.

As much as we’d like to think we can do our business without mega-social media companies like YouTube, Twitter and Facebook, they have in fact become vital to getting the word out as to what we do. We are not a huge media company. There are other video hosting services, but none has the reach and shareability of YouTube.

I’m now afraid to post completely legitimate fair use excerpts for fear of unfounded copyright claims that might be made against us. We removed over a dozen perfectly appropriate and lawful excerpts used in Mark Finkelstein’s media bias reporting, and moved them to another host, for fear that another takedown notice to YouTube, even if unfounded, could cause another account removal in light of the 5 strikes against us (at the time) due to MLA.

The Digital Millennium Copyright Act (DMCA) provides procedures so that persons asserting legitimate copyright claims can obtain prompt removal of allegedly copyrighted material. Companies like YouTube, to protect themselves, are all but required to comply with DCMA takedown procedures, pending counter-notifications and possible legal action.

Yet the DCMA process has a downside – the strategic and vindictive use of unjustified takedown notices to punish people. Regardless of whether it results in account removal, unfounded claims lead to the removal of newsworthy non-copyrighted or fair use material while the process works itself through.

That’s what happened here. We did eventually get the videos restored, but by then the news cycle regarding the MLA anti-Israel resolution had moved on. The material was gone during the period when it was most newsworthy. This is damage that cannot be undone.

Fortunately, there are also remedies when the DCMA takedown process is abused. Whether those remedies have enough teeth in them to deter abuse and to fully compensate the harmed party, remains to be seen.

Why isn’t it the normal process to allow the accused to respond before an account is shut down?

notamemberofanyorganizedpolicital in reply to casualobserver. | February 6, 2017 at 12:30 pm

YouTube is owned by Google. Need one say more?

Not that they ever will but Youtube needs to institute a counter-strike system where if you make X number of false claims then you are banned from Youtube, but that would be to much like fairness.

Not only did Donald Trump predict the Patriots winning the Super Bowl, but he predicted they would win by 8 points — not only did the Patriots win, but The Donald was only 2 points off!
http://www.foxnews.com/politics/2017/02/05/trump-picks-patriots-to-win-super-bowl.html

If the Donald would have made that prediction at halftime, I would have been REALLY impressed.

I’ve been trying to focus on other aspects of my life recently and I had no idea what you’ve been going through (both here and personally). It’s just awful to hear about all this and I’m so sorry you had to go through all the stress and work to get it resolved.

It’s terrible for our country that we are still so much in the grip of evil and I’m starting to wonder if we’ll actually make it through. G-d help us all.

Google, Ebay, PayPal, Twitter, Facebook — they all exercise crushing power without notice, accountability, identity or predictability. The 20th may have been America’s century; the 21st is clearly Orwell’s.

But Prof, you are not alone. Perhaps you could suggest a committee chairman to contact to inquire about these due process issues and I will join the petition. Perhaps lack of due process is a concern for Google shareholders, I will happily join any shareholder movement to that end.

you should consider creating you own video hosting capability on your website.

These are all very insightful videos. Thanks for reposting them. Please get some counsel re: Storage of videos like this. These are national treasures of learning, and should not be hidden from the American people.