“European white Jews are trying to oppress minorities all over the world … Keith would go on all the time about ‘Jewish slave traders.'” 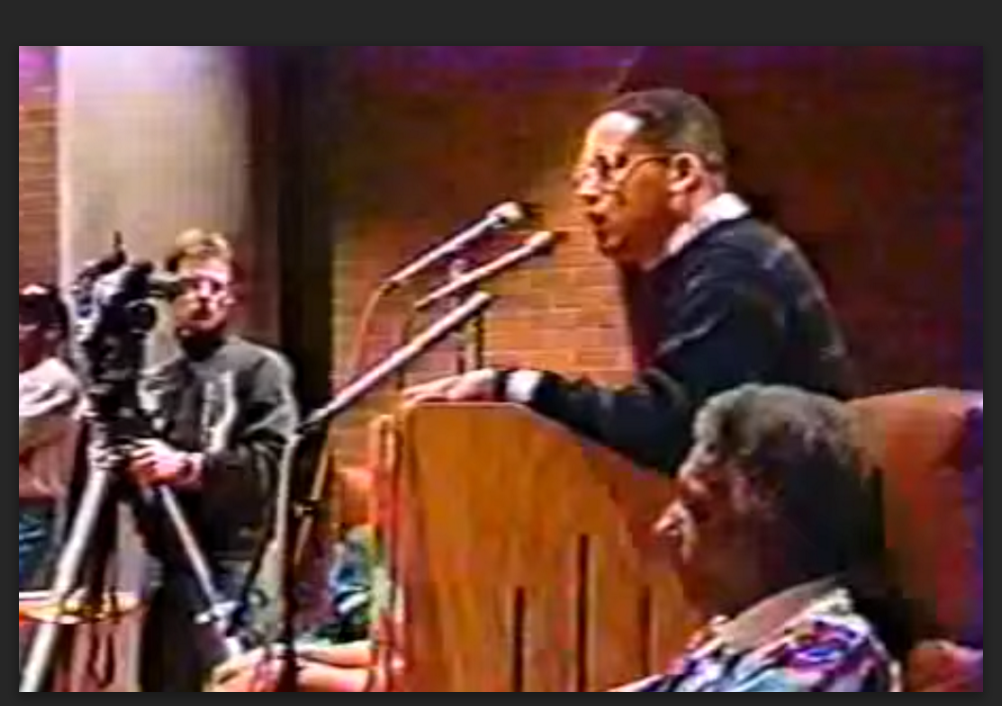 Since he announced his intention to run for Chair of the Democratic National Committee, Keith Ellison has received support from top Democrats, like Chuck Schumer, Elizabeth Warren, Bernie Sanders and Nancy Pelosi, and the left-wing Bernie-base of the party.

Yet from the start Ellison has been dogged with revelations about his past support for Louis Farrakhan and the Nation of Islam, his claim that American Jews do Israel’s bidding, and his association with fringe anti-Israel groups:

The excuse that he was unaware of just what Farrakhan was just doesn’t hold up. By the time of the Million Man March in October 1995, the media had been saturated for years with criticisms of Farrakhan’s anti-white, anti-semitic rhetoric.

The “right-wing” also didn’t force Ellison to cozy up to anti-Israel groups like the U.S. Campaign to End the Israeli Occupation (now rebranded as the U.S. Campaign for Palestinian Rights) and American Friends Service Committee.

The right-wing also didn’t force Ellison to participate in the main anti-Israel event at the Democratic National Convention last summer.

There is no vast right-wing conspiracy. There’s just history.

Since those revelations, Obama Labor Secretary Tom Perez has entered the race for Chair, with the backing of more centrist Democrats and the Obama-faction of the party, which worries that someone as radical as Ellison will further marginalize a party out of power at the federal and state levels. 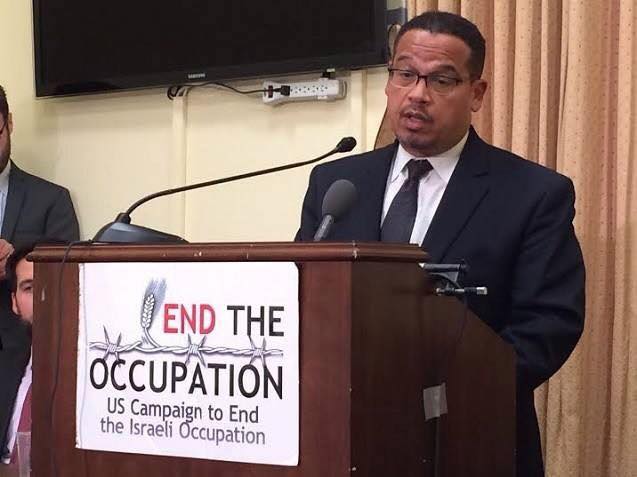 In an article arguing that Ellison is what Democrats need now, Mother Jones dug deeply into Ellison’s claims with regard to his Farrakhan connection. In so doing, Mother Jones not only cast into serious doubt Ellison’s defense, it also discovered even more troubling aspects of Ellison’s past, including a tendency to use the now-fashionable intersectionality theory to cast European Jews as oppressors, particularly as relates to Israel.

When the Africana Student Cultural Center sponsored speeches by Farrakhan and one of his associates, tensions erupted on campus between Jews and African Americans. Ellison, who had taken to calling himself “Keith Hakim,” published a series of op-eds in the student paper, the Minnesota Daily, defending the Nation of Islam leader. The center also invited Kwame Ture, the black-power activist formerly known as Stokely Carmichael, to give a speech, during which he called Zionism a form of white supremacy. Ellison, then a member of the Black Law Student Association, introduced him.

In the hopes of mending fences, the university organized a series of conversations between black students and Jewish groups. Ellison could be deferential at these meetings. He thanked Jewish students for sticking up for black students’ right to host controversial campus speakers—even if they had denounced those speakers—and suggested working together on common political causes. But he also insisted the charges that Ture was racist were unfounded.

Michael Olenick, a Jewish student who clashed with Ellison and who was the opinions editor at the Daily, recalled Ellison maintaining that an oppressed group could not be racist toward Jews because Jews were themselves oppressors. “European white Jews are trying to oppress minorities all over the world,” Olenick remembers Ellison arguing. “Keith would go on all the time about ‘Jewish slave traders.'” Another Jewish student active in progressive politics recalled Ellison’s incredulous response to the controversy over Zionism. “What are you afraid of?” Ellison asked. “Do you think black nationalists are gonna get power and hurt Jews?” (Ellison has rejected allegations of anti-Semitism. “I have always lived a politics defined by respecting differences, rejecting all forms of racism and anti-Semitism,” he wrote recently. He declined to be interviewed for this story, and his office did not respond to detailed questions from Mother Jones.)

Mother Jones goes on to question Ellison’s timeline of when he broke with the Nation of Islam (emphasis added):

In his book, Ellison describes the event, held in October 1995, as a turning point in his flirtation with Farrakhan….

Ellison has said that he was never a member of the Nation of Islam and that his working relationship with the organization’s Twin Cities study group (the national organization’s term for its chapters) lasted just 18 months….

But his break from Farrakhan was not quite as clean as he portrayed it.

Under the byline Keith X Ellison, months after the march that he described as an epiphany, he penned an op-ed in the Twin Cities black weekly Insight News, pushing back against charges of anti-Semitism directed at Farrakhan. In 1997, nearly two years later, he endorsed a statement again defending Farrakhan. When Ellison ran (unsuccessfully) for state representative in 1998, Insight News described him as affiliated with the Nation of Islam. Two organizers who worked with him at the time told me they believed Ellison had been a member of the Nation. At community meetings, he was even known to show up in a bow tie, accompanied by dark-suited members of the Fruit of Islam, the Nation’s security wing.

Minister James Muhammad, who in the 1990s led the Nation of Islam’s Twin Cities study group, confirms that Ellison served for several years as the local group’s chief of protocol, acting as a liaison between Muhammad and members of the community. He was a “trusted member of our inner circle,” says Muhammad, who is no longer active in the Nation of Islam. Ellison regularly attended meetings and sometimes spoke in Muhammad’s stead, when the leader was absent. An Ellison spokesman declined to answer questions about the congressman’s role in the study group and instead replied in an email, “Right wing and anti-Muslim extremists have been trying to smear Keith and distort his record for more than a decade. He’s written extensively about his work on the Million Man March, and has a long history of standing up against those who sow division and hatred.”

It was only in 2006, as his run for Congress floundered, that Ellison repudiated Farrakhan. “I was hoping it wouldn’t come up,” he told the Star Tribune, when pressed…. Last fall, his aides canceled a scheduled interview with the New York Times when they were told that questions about Farrakhan would be raised….

Scott Johnson at Power Line, whose writings about Ellison over many years have provided the basis for much if the Farrakhan controversy, notes the importance of the Mother Jones article:

Murphy covers Ellison from a supportive radical perspective, yet Ellison refused to talk to him. Ellison obviously refused to talk to Murphy because Murphy had the material with which to raise questions about Ellison’s involvement with the Nation of Islam. Murphy notes parenthetically: “[Ellison] declined to be interviewed for this story, and his office did not respond to detailed questions from Mother Jones” (and there is more to this effect below as well)….

I seriously doubt that Ellison’s DNC candidacy can succeed in the face of Murphy’s friendly if honest reportage. That means we will be dealing with Ellison in Minnesota for some time to come. if so, Murphy’s reportage should help us understand whom we are dealing with.

I don’t think Ellison’s DNC candidacy is dealt a death blow by the Mother Jones article.

Racial politics and false claims of Islamophobia to silence debate are what the Democratic Party of 2017 is all about. Keith Ellison fits right in.

This idiot is the perfect fool to lead the Democratic Party into oblivion. Time to start writing articles that support him for this position.

Death blow? Isn’t Mother Jones’ position, ‘Keith is more of a radical than he lets on, so he would be just what the Democratic Party needs – why aren’t you supporting him?’ Surely, lies that advance the cause do not bother them greatly?

For once, I find myself agreeing with Mother Jones; Ellison for DNC Chair!

Is there a fundme site?

The Left is crawling all over each other to get into Thelma & Louise’s back seat.
Ellison’s a lock.

I propose a winning ticket for the Dems in 2020 and that is a Warren/Ellison union! I truly believe a dead person could win against that ticket. They could have Corey Booker as a standby in case Ellison gets double tapped by the Mossad.

Ellison and Warren will compete for the most hateful candidate award.

When the far left media has their Op/Ed’s following the same bent as where the right is, you have to figure it’s “going to be trouble in River City” time. A definite you can run but not hide comeuppance.

The Left is in full “alt-right, white nationalist, anti-semitic” roar against conservatives (such as Steve Bannon) while the actual race supremacist and anti-Semite is enjoying the Left’s favorable attention and is within a hair’s breadth of being in a position of power and authority with the Democrat Party.

It seems progressives are always exactly the people they accuse others of being. For some, I’m sure that’s part of the plan, but the rank-and-file is likely clueless.

Isn’t it time to not dignify idiots like this with a diploma mill title?

When Ellison or Screaming Fauxcahontas needs emergency surgery to save their lives, hopefully it’ll be Dr. Kewame Ture that gloves-up.

Ellison is utterly vile. That he is a leading candidate to lead the Dumb-o-crat Party speak’s to that Party’s total moral bankruptcy and loss of rationality and objectivity.

The list of contemptible and indefensible associations and utterances made by this reprobate are long. Prominent among them is his unguarded and unabashed remark, made while a sitting Congressman a couple of years ago to a sympathetic audience, that Israel was allegedly using the U.S. as an “ATM machine,” a despicable statement conjuring up all the stock anti-Semitic canards of Jews as greedy usurpers.

It boggles the mind how the people of Minnesota, once so emblematic of midwestern common sense, were gullible enough to elect this transparent hustler (as well as pitiful clown, Al Franken) to Congress and the Sentate, respectively..