“There’s no human to call up”

“There’s no human to call up”

Welcome to the world of social media shutdowns, my interview on The Dennis Prager Show 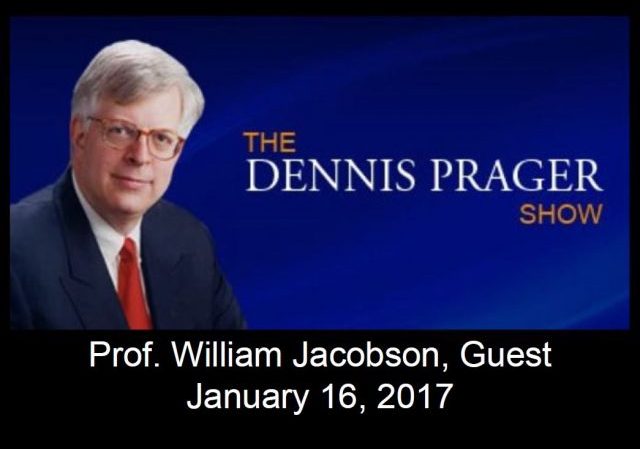 I appeared on January 16, 2017, on The Dennis Prager Show to discuss the shutdown of Legal Insurrection’s YouTube account, as detailed in these prior posts:

We frequently run PragerU videos, which are excellent both as to topic and production quality.

Scroll through the PragerU Videos tag to see the ones we have posted.

As we reported previously, PragerU had its own problems with YouTube, YouTube Banned Prager U Video “Born to Hate Jews” – Reinstated After Protest and Petition:

Hafeez almost enlisted in a terrorist training camp before realizing the error of his ways. He explained how hatred drives many young Muslims into terrorism.

Shortly after the video was published, YouTube banned it. Previously, YouTube restricted twenty-one Prager U videos, removing restrictions from four after receiving a petition bearing more than 85,000 signatures.

So it’s no surprise that PragerU took an interest in our situation, helping to call attention through social media. I thank them not only for the effort, but also for the camaraderie at a time I didn’t know if we’d ever get the Channel back.

As I discuss in the interview, when a large social media company like YouTube shuts you down, there’s no human to call. It is a very isolating feeling.

Here is the interview. Stay tuned to the end, when we switch topics and discuss what it’s like for me to be the only openly politically conservative faculty member in an entire law school.

Businesses have been nationalized in the past when they have been deemed critical infrastructure, such as power companies.

Some of you people really scare me…

Didn’t AlGore tell you? It already is.

Not nationalize but busted-up under antitrust laws… could use more competition.

Morally that’s not much better. The antitrust laws are the work of the “progressive” movement, motivated by envy and driven by the “fake news” of Rockefeller supposedly selling oil at a loss to drive out competition. Follow this link and scroll down to the section on antitrust laws, for a description of the terrible injustice that was done to alcoa, for no reason but sheer envy and hatred of successful people.

How is YouTube hobbling competition? Mere success is not, in itself, anti-competitive.

You’d think so, but see the alcoa case, which said that mere success can be illegal, and the later legislation that enacted this pronouncement into law. This is one of the more horrible things that our government has done, and no conservative could support it.

“Nationalise” is just a nice word for “steal”. It is never justified and no conservative could propose it.

The Internet is a public utility. How many sets of power/water/sewer lines do you have servicing your house?

So you FAVOR monopolies?

Here in Texas, we are free to buy power from any number of providers.

Same with ISPs. Cell phones, too.

Like I say, some of you people scare me.

And yet you keep coming back. It’s a mystery.

Utility or not, private property belongs to its owners, not to the government, and forcibly taking it away is called stealing, which no conservative could support.

Two of my favorite “nice Jewish boys” together!

Heard the podcast yesterday. Prager was sounding almost alt-right in the first hour. This may be the Great Un-Cucking of the conservative movement that the voters have been waiting for.