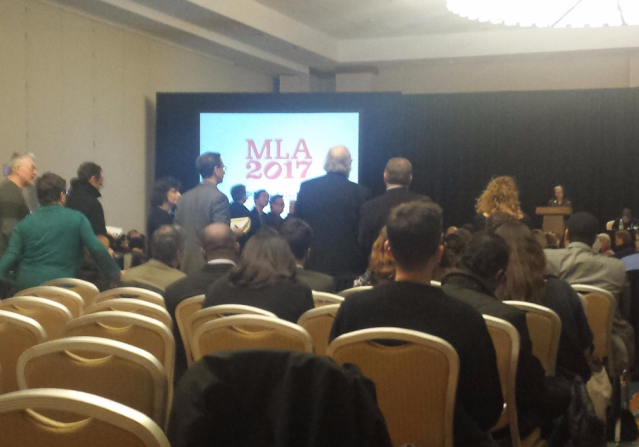 An exhaustive discussion of the resolutions and history of BDS activity at MLA is set forth in our prior post, Israel Boycott vote at Modern Language Association on January 7. Opposition to the BDS motion was led by a group calling itself MLA Members for Scholars’ Rights, including Cary Nelson (U.Illinois), Russel Berman (Stanford), Rachel Harris (Illinois), Marty Schichtman (Eastern Michigan), Gabriel Noah Brahm (Northern Michigan), Jonathan Skolnik (UMass), Eric Aronoff (Michigan State), Yael Halevi Wise (McGill). The pro-BDS push was led by the usual cast of faculty who lead efforts at almost every faculty association in the Humanities.

The third resolution vote is pending. (UPDATE: The third Resolution was table indefinitely at the request of the anti-BDS people who proposed it. It became superfluous to the anti-BDS fight once BDS was defeated.)

We will have a full write up from someone in the room, probably tomorrow, but here is a taste of how the debate unfolded.

The debate at the MLA townhall yesterday was particularly vicious from the pro-BDS people:

Some in crowd at #mla17 #MLABoycott17 clapped when this Jew-bashing took place https://t.co/hfIwkQlzcu

The opposition was much more an appeal to reason:

Best Q of #MLAboycott17 #mla17: If BDS passes – Do we just boycott the Jews at Israeli universities? https://t.co/CIBzti7lTj

This opposition was interesting, using the verbiage of social justice movement AGAINST BDS:

The key to the inherent Jew-baiting nature of this fraud can be found in the words “decolonize the USA.”

The notion of the Jew as a “colonizer” or parasite is Mein Kampf essentialism. While this professor would likely sheath this with differentiating Jews from Zionists, the rhetorical framework is unmistakably anti-Semitic.

How can such a statement even be rationally applied? With a few exceptions in the original settling of the U.S. – such as Jews being a part of the first inhabitants in Savannah, etc. – there has been little “occupation” and governing by anyone of Jewish descent and even fewer of those with a strong position in Israel. When Jews hardly make up 1% of the current population, it cannot even be rationally applied to modern conditions.

It’s an academic postulation that isn’t supported, but gets traction in many anti-Israel and anti-Semitic quarters.

“It’s an academic postulation that isn’t supported, but gets traction in many anti-Israel and anti-Semitic quarters.”

As the saying goes, it’s an idea so monstrously stupid that only an intellectual could believe it.

The pro native American prof should be totally with Israel since the Jewish people are the original Native Palestinians.

Going to be a bad 4 years for the Jew haters, I think.

I wonder if the anti-BDS challenge in academia can be sustained. The anti-Israel sentiment and pro-BDS faction still appears to have a lot of support and energy. Is this a temporary loss of momentum or a more permanent one? It is the academe, after all.

Outside of that, I have little doubt the political winds in the general population of the West is changing.

“political winds in the general population of the West is changing.”

If it was only that wind which was blowing, but until the general makeup of the all university faculties swing back away from being a closed group comprised of 80% professionals whom subscribe to neoliberalism in their approach to instruction and advising, the BDS movement will continue to grow in strength and numbers from the recruitment of the young and naïve.

The victories of Brexit and Trump suggest that nationalism returns as a growing force in the West. The end-stage of neoliberalism was the eradication of borders and the destruction of any (Western only) state with a particularist premise, be it Zionism, Uncle Sam or John Bull.

That model has been failing, marooning globalist elites in Davos or Brussels. With shifting geopolitical winds, it may be that the ultimate Pally stronghold isn’t the West Bank or Gaza, but in Cambridge, New Haven or Berkeley.

Your first paragraph is a crock of shit.

Wow – talk about a self-hating jew! You can’t go farther down the road than that prof has. j

He sounds like he should be teaching “Why the death camps were really a good idea! 101”

This is awesome in a dozen different ways.