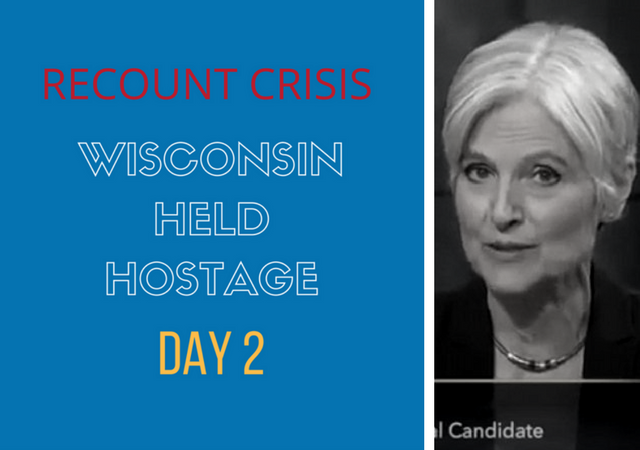 Friday, two pro-Trump super PACs filed a law suit alleging the Wisconsin recount is unconstitutional because not all ballots are treated equally. The suit also expresses concern about the possible forfeiter of Wisconsin’s ten electoral votes should the recount proceed.

The lawsuit contends, in part, that the state’s recount process is unconstitutional because ballots aren’t treated equally in all cases — a standard established in the 2000 U.S. Supreme Court case that halted a recount in Florida and left George W. Bush as the winner of that year’s presidential race with Al Gore.

The challenge was brought in federal court in Madison on Friday by the Great America PAC and Stop Hillary PAC, which also argue that the recount runs the risk of preventing Wisconsin’s 10 electoral votes from being counted. State elections officials have said they’re committed to finishing the recount by a federal Dec. 13 deadline to ensure that doesn’t happen.

The recount began Thursday after Green Party nominee Jill Stein — who received 1% of the vote in the Nov. 8 election — paid $3.5 million to force the state to re-tally nearly 3 million presidential votes across Wisconsin. It’s considered highly unlikely that the recount would affect Trump’s 22,000 vote win over Hillary Clinton in the state.

“Jill Stein is clearly not entitled under statute to a recount and for the state board to allow it would be a massive waste of taxpayer resources in violation of the plain reading of the statute,” Eric Beach, co-chairman of Great America PAC, said in a statement.

The Wisconsin Elections Commission said Friday that local clerks and canvassing boards should keep up their race to finish the recount.

Governor Walker has said he’d consider measures that would restrict the ability to request recounts and called Stein’s effort, “a fundraising scheme for the Green Party.”

“I think a lot of people no matter where they sit on the political spectrum kind of scratch their head on why someone would ask for a recount when they came in fourth,” Walker said of Stein, who finished behind Trump, Clinton and Libertarian candidate Gary Johnson.

“I think we should call it for what it is and really it’s just a fundraising scheme for the Green Party,” Walker told reporters. “It’s perfectly legal. It’s their right to do that. They’re paying for it. The taxpayer’s not paying for it. The only real concern I have is that for a lot of these clerks, local clerks, they’re already busy.”

Stein claims she’s only pursuing a recount in order to ensure the integrity of America’s election process, but as we keep pointing out, it’s hard to believe it sheer coincidence that her recount scampaign has only hit the three states Hillary was projected to win, but didn’t. That Hillary’s campaign joined the Wisconsin suit doesn’t help the election integrity line either.

The first results in Thursday evening were from Menominee County. Trump lost two votes compared to the initial count and Democrat Hillary Clinton lost one. Stein gained 17 votes and Libertarian Gary Johnson picked up 12 — a discrepancy the state Elections Commission reported was due to “human error” in which their vote totals from certain wards were omitted from the initial tally.

The Green Party has denounced Stein’s recount efforts and laments her decision to pursue state-wide recounts instead of a select few local races where Green Party candidates narrowly missed the ballot.

Let’s start with a recount of Bernie’s vote in the Primary.

The whole purpose (besides the love of getting the publicity) is to deny Trump a chance to celebrate and have a party. Given how boobs can drink at parties it’s probably a plus for Trump NOT to have to deal with party goers at this time.

Christmas is around the corner. People know Trump won. And, lots of people know that inauguration day is January 20th.

The MSM did not expect Trump to win! And, who knows what’s up with Hillary? Is she having a psychotic meltdown?

3 states in the same geographic area that happen to historically be democrat strongholds that Hillary was expected to win.

If you really wanted to “ensure the integrity of America’s election process” you would break the US down into its 4 major geographic areas and then randomly choose a state for each side from each area.

The whole purpose of this recount is to delegitimize Trump’s win, so that the Left can claim that the election was “stolen” from them, for at least the next 4 years. Oh, and to claim that the Republicans “have no mandate”, when they clearly do.

It is just a scheme to raise funds for the Green party to use in future elections.