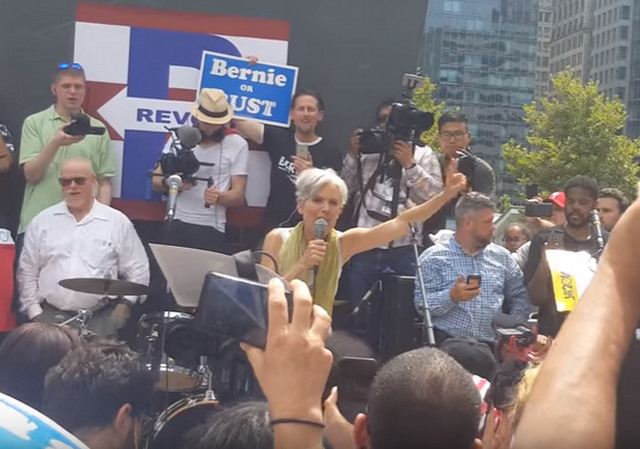 Looks like Jill Stein’s recount charade is nearing its end.

Stein and her recount compadre, Roque “Rocky” De La Fuente, have until 4:30 Tuesday to come up with $3.5 million if the recount is to proceed.

The petitioners have until 4:30 p.m. today to submit the money in full, according to the Wisconsin Elections Commission.

Stein was informed about the hefty price tag Monday.

Yesterday, we found out Wisconsin will charge us $3.5M—an outrageous increase from the initial estimate of $1.1M for #Recount2016.

Reportedly, Stein has raised about $6.4 million for her recount efforts.

Clinton’s attorneys filed a motion Tuesday seeking to join the lawsuit, arguing the recount could affect her. They also filed a memo supporting the push for a hand recount, saying that method is the most transparent for the public and will ensure the most accurate results.

Stein claims she’s not working in conjunction with any other campaign, but other campaigns have said they’ll observe the recount efforts from the sidelines.

Attorney Marc Erik Elias says that is enough of a margin that should convince McCrory to concede:

Bailey-Rihn says there was no clear and convincing evidence that there was a defect or mistake in the voting process in Wisconsin.

The recount is set to begin Thursday.

North Carolina’s gubernatorial recount is likely to continue to be contentious, after 90,000 early votes were found on Election night in heavily Democratic Durham County, which helped propel Cooper to a pre-recount victory.

I got a security alert.

I had to uninstall chrome to get out of some scam that froze the browser..

How does one “find” votes? And, only in Democrat areas? The people I have worked with regarding the custody of votes were always extremely diligent.

I am out of options.

The answer is “yes”

posted link in tip forum saying this post has malware and lease remove.
hopefully someone sees it that can remove the posts.

Thank you. We’ll look into it!

Yep, the Stein recount is pretty much a scam.

Sure, but it’s still “news” to half the ignoramuses in our country. This needs to be countered so the numbskulls who buy into it understand what it is.

Don’t look for Creepy McConnell or the Cowardly Ryan to help – this is all on Trump, and he’s the prefect guy to do it.

I thought it was “Heads we win; tails we whine”.

I saw where someone posted that the fund me page she used requires 3 to 5 days to pay , she may not have it

Another humiliation in store for Mrs. Scum.

Wait till the dept of state’s financial records start getting sorted out, and the 6 billions dollars that’s missing starts getting traced to…Mrs. Scum and Obama:
http://dailycaller.com/2016/10/20/the-6-billion-clintons-state-dept-lost-was-not-debunked/

So the deadline to pay has passed. Anyone know whether Stein forked over the dough? And why in the love of God is Hillary’s campaign continuing to humiliate themselves in this way?

Because it’s her vaginas turn.

The Miami Herald is reporting she wired the money before the deadline expired.

I’ll bet that George Soros fronted her the cash to wire to Wisconsin so that the recount starts. Dollar to a donut, that Stein will not have to pay that back

Stein has met the deadline. Wisconsin recount is on.

The Democrat plan is to make Donald Trump look bad. They’ve got Kieth Olberman doing a piece on GQ blog that suggests an alternative way to get him out of office.

These aren’t ‘sore losers’ they are doing everything they can to steal the election.

Judge Bailey-Rihn says plaintiffs failed to show a hand recount, though more thorough, was necessary or required under the law.

So what form exactly Is the non hand recount taking?

I don’t understand the concept of a “hand recount” in areas where electronic voting machines were used.

THe ballots are paper. The machines are optical scanners. The same kind that were 100 percent correct in the florida 2000 recount (for the three counties that used them).

According to what I have read, some areas in Wisconsin use the paper ballot and optical scan system, and some use electronic voting machines which have no paper trail. The former system is the only one which is reliable, in my opinion.

So, she has to pay $3.5M out of the $6.4M she raised just to get a recount in WI. Is she still challenging the deadline she missed in PA in court? I wonder how much the court challenge alone will suck up out her remaining $2.9M. I don’t think that will leave much to pay for the actual recount. Although I don’t expect any judge anywhere to arrive at a different conclusion than Bailey-Rihn; I can’t see her getting a recount at all let alone a statewide one.

Then, on to Michigan!

Tap into those retirement funds, liberals. You need to keep Jill Stein and her efforts to disenfranchise voters in three states, err, I meant ensure the integrity of the democratic process alive.