“If Ellison were running as a Republican, Democrats would attack him as a tax cheat” 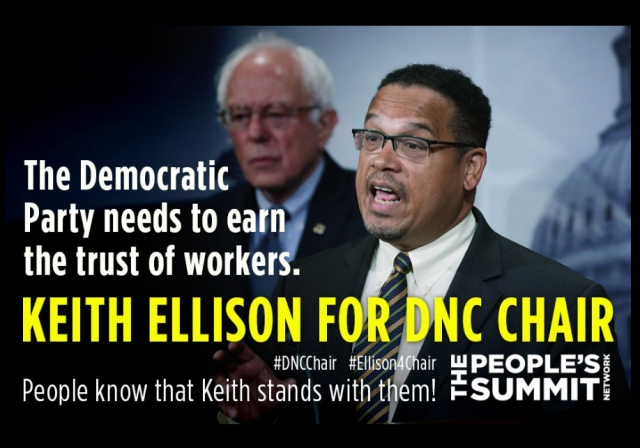 Minnesota Congressman Keith Ellison was fast out of the gate for Chair of the Democratic National Committee, amassing quick endorsements from Chuck Schumer, Elizabeth Warren, Bernie Sanders and the AFL-CIO.

But Ellison was barely at the first turn when he stumbled badly in what Ellison and his supporters called a “smear campaign” against him. Ellison’s past decade-long support for Louis Farrakhan and the Nation of Islam, his suggestion of dual loyalty from American Jews when speaking at a fundraiser for Muslim leaders, and his cozy relationship with some of the worst pro-BDS, anti-Israel groups, has disrupted what seemed like a clear trajectory to DNC Chair.

And then Obama-Biden sent signals they were encouraging Labor Secretary Tom Perez to seek the position. I suggested at the time that Keith Ellison DNC bid circling Farrakhan drain as Perez set to announce.

Perez did announce, and quickly is gathering momentum with the backing of Team Obama, as Politico reports:

The effort to boost Perez, paradoxically and to Ellison’s irritation, is led by operatives allied with the country’s first black president, who view the Minnesotan as too tied to the identity politics they think cost Hillary Clinton the election.

“We like Keith,” one longtime Obama political ally, who was pushing Perez, told me in November. “But is he really the guy we need right now when we are trying to get all of those disaffected white working-class people to rally around our message of economic equality?”

The International Association of Firefighters, the main union representing American firefighters, has placed itself on a collision course with the AFL-CIO in the race for the next chairman of the Democratic National Committee, deciding to back Labor Secretary Tom Perez over Minnesota Rep. Keith Ellison….

But the IAFF is the second major union in the AFL-CIO to back Perez, and more defections may come.

On Friday, the United Food and Commercial Workers International Union — one of the country’s largest unions, with 1.3 million members — came out in support of the labor secretary, saying its members “saw firsthand his passion and commitment” to their issues during his work heading the Department of Labor.

Another union, the United Farm Workers, endorsed Perez on Monday. Their membership is small, but the endorsement comes with a symbolic connection to famed labor leader Cesar Chavez, who founded the union. 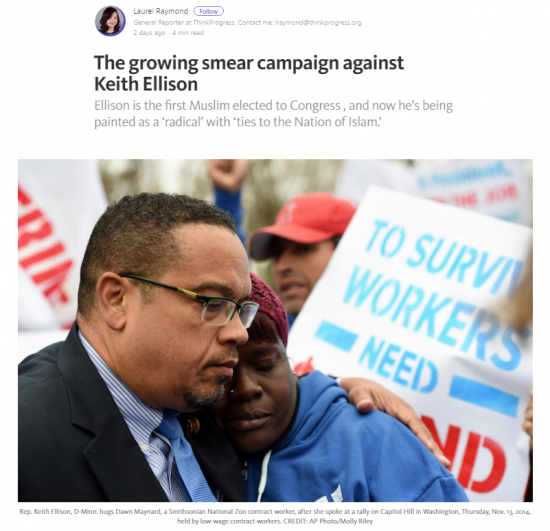 And now, the Establishment Strikes Back, at a major oppos research dump just landed on Ellison’s head.

Opponents of Rep. Keith Ellison’s bid to be the next Democratic National Committee chairman are raising new questions about the Minnesota Democrat’s past to make the case that he’s unfit to be the party’s next leader.

Ellison’s critics in the DNC and some supporters of Labor secretary Tom Perez, the other top candidate, are pointing to the Minnesota Democrat’s past tax troubles, campaign finance violations and minor legal issues that once led to his driver’s license being suspended as evidence that he’s ill-equipped to lead the DNC.

Some of those instances date back to the 1990s. All of the issues have been rectified and were previously used in attacks against Ellison during his first run for House in 2006….

But Ellison’s detractors within the DNC say that it’s evidence he can’t manage his personal life and would be a poor choice to manage an institution the size of the DNC.

Bob Mulholland, a DNC member from California and one of 447 who will vote in the February election, says he has not backed a candidate yet but will not support Ellison.

“One Republican said to me, ‘You’re going to elect a tax cheat who drives without a license?’” Mulholland said. “It’s absurd.”

“If Ellison were running as a Republican, Democrats would attack him as a tax cheat, so I have no idea why Washington insiders are urging the grassroots to elect another insider. If you can’t drive or pay taxes, you can’t organize your life, so I concluded early on that he can’t organize for this job.”

Team Ellison is furious with a capital “F”, The Hill continues:

Ellison’s supporters are furious, and accusing his opponents of running a smear campaign against him, which they say started with accusations that Ellison is an anti-Semite….

“His opponents are looking through his past and digging up stuff from his Congressional and legislative races that fell flat and that Minnesotans rejected,” Martin said. “I welcome them to keep focusing on stuff that doesn’t matter. Keith will focus on building the party up from the grassroots.” …

“This is just plain mudslinging,” said Terry Tucker, a Colorado DNC member who backs Ellison. “These minor things, a traffic infraction or taxes, this happens to all of us, none of us are blameless. This does not disqualify you from leadership, it just shows that you’re human.”

Keith Ellison, come on down and meet the real Democratic Party.

So a tax lien disqualifies Ellison but Farrakhan doesn’t. Welcome to the Democratic Party 2016. https://t.co/IwMQ0Ylr1Q pic.twitter.com/mwS2bsJXNE

Wonder if *someone* is going to dig through Ellison’s divorce records. Not that Team Obama would do something like that.

Perez is a real nasty piece of work. And for that reason I expect he’ll be chosen.

True to their form whoever the Democrats choose will decidedly be un-American.

Let the Democrats fight amongst themselves. Grab your popcorn!

It’s like Democrats are incapable of changing their game. It’s either identity politics or labor unions. Have they so starved their party that that is all that they have left?

They’re clearly stuck in a rut and spinning their wheels to get out of the ditch they’ve dug. Their only hope is that Trump can energize some new blood, but he appears to be further undercutting them instead.

I was actually hoping for Ellison, just the right guy to finish off the party.

Maybe Hillary Clinton will bribe her way into the position.

this is clearly a sign that Obama’s going to control the Democrat Party..

That may be good. May the voters never forget the racism and economic and political destruction that Obama delivered in his eight years. Obama’s legacy? He did what I thought was impossible: He took the “Worst Modern President” trophy away from Jimmy Carter.

Obama has already done great damage to the D Party. May it continue.

Boo! Should’ve waited to see if the D’s are crazy enough to make him head of the DNC first. Let him secure the position, then dump the oppo research and force him to resign.

Powerline did the work long ago, before Ellison ever became a US Representative. They packaged it up neatly, ready to re-deploy should Ellison ever venture out from his safe black district in MN.

Ellison is dead here. While he is a twofer (Black and Muslim), the latter alone should be disqualifying, with its adherents routinely murdering in the name of their Prophet. And Blacks had their run in power in the DNC with Obama and, latest, Brazille. They are sewn up, at least for now, as a Dem constituency. Much better to cater to the up and coming demographic – Hispanics, and, thus, Perez.

My theory is that Ellison really never had that much chance. He jumped into a power vacuum, thanks to both DWS and Brazille screwing up as DNC chair, Crooked Hillary losing to Trump, the Dems not retaking the Senate, while losing even more at the state level, and Obama getting ready to retire. He was being opportunistic, which is great, but saner heads seem to be prevailing. Perez is s Hispanic and vicious, which is what the DNC probably thinks it really needs right now.

It;s a good thing We’ve stocked up on good Czech pivo and popcorn!!

Does this mean that Obama is now a racist for refusing to support a black candidate? This would be the case had the opposition information come from a Republican.

Unions back these people. Isn’t that all we need to know?

Perez’ degree from Brown University should be disqualifying. Brown is too radical. But then it is the Democratic Party we are talking about here.

A man called and told me that Keith Ellison and Harry Reid have engaged in a 10 year long illicit sexual affair, and that Reid is leaving the Senate because he’s pregnant and has never paid taxes.

Obama and those unions should prepare to all be called RAAAAAACISSSST by the democrat party.

So. Ellison is not Obama’s sort of Muslim?

We The People need Ellison–do not disappoint us !!! ABJ

It’s hugely entertaining to hear elements within the Democratic party cry foul when they’re hit with some of the same dirty tricks they’ve been using against republicans for years. They did it to Bernie and his supporters, now they’re doing it to Ellison and his. The politics of personal destruction don’t play as well when you’re on the receiving end.