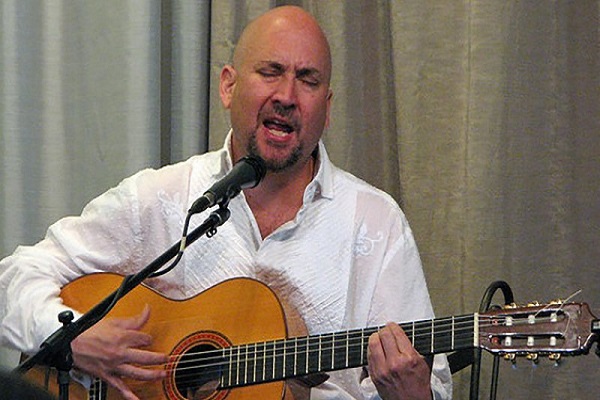 For some reason, I thought “folk singers” went out with lava lamps, tie-dye, and patchouli, and though I know folk music has a long and proud tradition, I just can’t shake the image of doped-out ’60s hippies singing about peace at SDS and Weather Underground rallies . . . where domestic terrorism was often on the list of things to do.

As it turns out, though, folk singing is alive and well; indeed, an Oregon folk singer is heading to Syria with the hopes of serenading ISIS into peaceful submission.

It sounds like an Onion story, but Fox News reports:

James Twyman, of Portland, Ore., told FoxNews.com he feels a “calling” and believes he can soften the hearts of the Islamist army known for beheading Westerners, throwing gays off of buildings and summarily executing innocent women and children.

“It’s going to be pretty powerful,” Twyman said, referring to his plan to have those attending and others around the world sing and pray for peace at the same time. “When people come together and focus on something in a positive way…there’s scientific evidence that it can change things for the better.”

So this American folk singer, who considers himself a “peace troubadour,” is going to saunter up to ISIS, pull out his tambourine or bongo drums (or whatever), and start singing “Kumbaya”?

Twyman leaves Jan. 20, and plans to stop in Italy before heading to Israel. From there, he will then cross over the northern border shared with Syria to a small Druze village.

While that village, Majdal Shams, is occupied by Israel, Twyman said he has contacts there trying to set up a venue in ISIS-controlled territory. Either way, the show is set for Jan. 31.

Whether or not he gets his wish to sing for ISIS in their own territory, the State Department has placed heavy restrictions on travel to Syria.

The U.S. State Department placed heavy restrictions on travel to Syria ever since ISIS started occupying large regions throughout the Middle Eastern country.

“No part of Syria should be considered safe from violence,” reads the travel warning on the State Department website. “The potential for hostile acts exists throughout the country, including kidnappings and the use of chemical warfare against civilian populations.

Despite the warnings, he intends to go:

Twyman says that officials from the State Department reached out to him and urged him to cancel.

“They have advised me not to go,” he said.

Officials for the State Department declined to comment on the matter when contacted by FoxNews.com.

Twyman believes he must go, despite the dangers.

“I’m no sort of hero, but I do believe in the power of this.”

“Hero” was not the word I had in mind.

[Featured image via The Daily Beast]

Good luck in your new role as a propaganda tool for ISIS and future Darwin Award winner.

Especially since music is considered satanic by muslim fundamentalists like ISIS. My guess is he never gets within 20 mile of their territory.

Wonder how he’ll play without his head?

My first thought as well. Although, if ISIS were to be creative, they’d just cut off his hands.

Or shove the guitar up his ass.

It could only improve his sound.

The future star of a “saw his head off” feature on utube. IF he’s lucky…

So, based on that lyric, should we presume you expect him to be beheaded with a Bowie knife?

Soon to be dead guy.

He’s not a hero. ISIS will make him into head cheese.

I see an award in this genius’ future: The Darwin Award.

The playlist attached to his microphone:

Unlike him, I can go on all night…

I wonder if I can correctly guess whom he voted for in the last two presidential elections.

Tell him to make sure and pack a couple of extra heads.

Let’s just put a GPS in his guitar and do a drone strike when he gets to them.

I keep picturing the scene in Animal House where Bluto smashes the guys guitar.

As he gets his head lopped off with his guitar string

ISIS will restring his guitar…around his neck.

I don’t see this ending well for him. Too bad.

He”ll be number one, with a bullet.

I thought the dodo bird was extinct.

This will be fun to watch, but I’m betting he will wimp out at the last minute. He’ll go as far as Israel (or the village occupied by Israel) and then make up an excuse not to go any further. That excuse will probably involve blaming Israel in some way.

They’ll likely set him on fire and behead him. Nothing lost.

I hope his life insurance policy is paid up, although “death by suicide” usually isn’t covered. Given their love of Western culture, the ISIS lads will not doubt give him a standing ovation before they burn him alive.

I wonder if he’s ever heard of the word “DELUDED”? Look for his head on a pole in the near future…