For the Palestinian Authority, Drinking Coffee with Jews is a Criminal Act 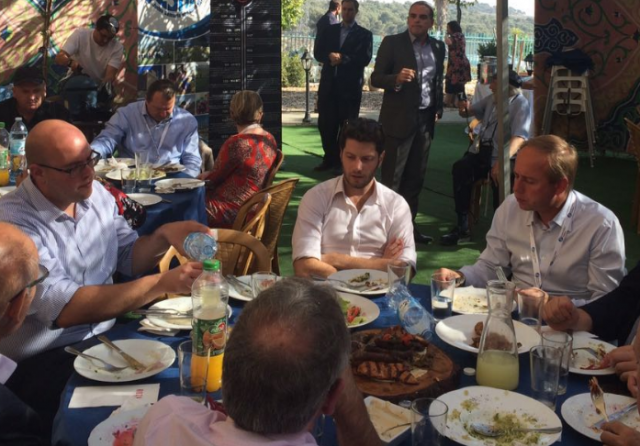 Last night Israeli media (see here and here) reported the breaking news that four Palestinian men who had been detained since Thursday by their own government for visiting with their Jewish neighbors over the Sukkot holiday last week were finally set free.

The Palestinian Authority on Sunday released four Palestinians it had held in detention since Thursday after they attended a religious festival in a nearby Jewish settlement, Israel Radio reports.

The four were among around 30 Palestinians from two neighboring villages who took part in festivities for the Jewish holiday Sukkot in the West Bank settlement of Efrat.

In total more than 100 people attended, including senior Israeli military and police officers.

On Thursday the four men were called in for questioning by Palestinian security forces. Oded Revivi of the YESHA settlers council, and host of the event, told the AFP news agency at the time that the men were senior figures in the local Palestinian villages of Wadi al-Nis and Al-Khadar.

Revivi said the purpose of the event was to improve relations between settlements and neighboring Palestinian communities.” 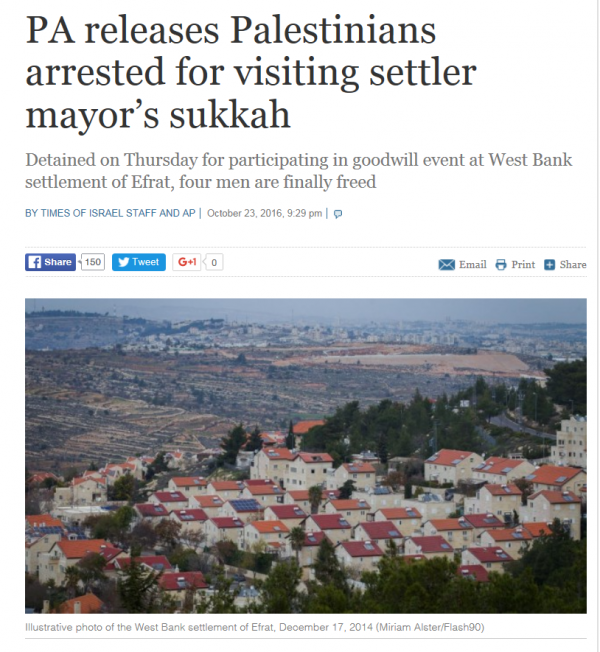 For the PA, Drinking Coffee with Jews is a Criminal Act

For readers who haven’t been following this latest instance of bizarre PA repression of its own citizenry, here’s the story in a nutshell:

Revivi, who is also Efrat’s mayor, had invited the group of Palestinians from the Hebron and Bethlehem area last Wednesday for what he hoped would be the “fulfillment of the term ‘Succa of Peace’” and the start of many more such meetings to build bridges with the Palestinian villages near his community. 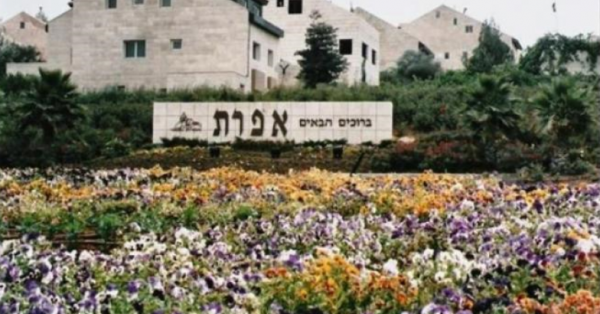 In Hebrew: “Welcome to Efrat”

By all accounts (see the Washington Post coverage of the event here), the gathering was a success—participants aired grievances respectfully and frankly with the goal of finding solutions for day-to-day irritants, and dialogued about how to make their ‘evolving relationship’ stronger.

They even spoke to their mutual interests and willingness to live together, something that the Post reporters found “remarkable.”

Photos of the meeting show that the gesture of good will was a cordial event made even more meaningful on account of it being held during Sukkot (Feast of the Tabernacles). It’s a Jewish tradition of hosting friends, neighbors, and associates in sukkahs—the temporary structures which are meant to recall the booths that the Israelites erected in the desert during their exodus from Egypt: 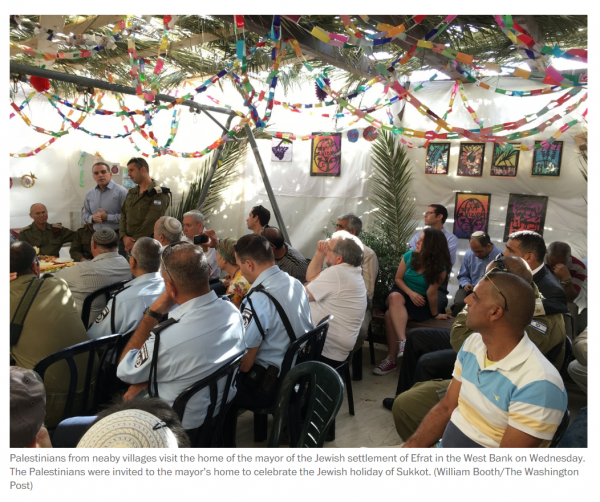 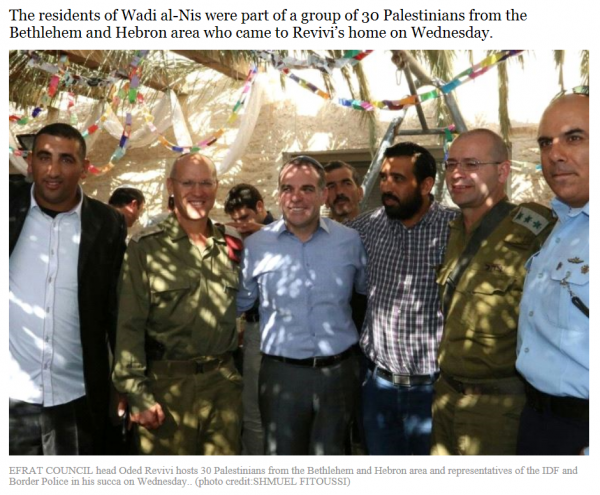 The four men were summoned by Palestinian Authority intelligence and security forces and questioned about the meeting only after the images were circulated on social media. 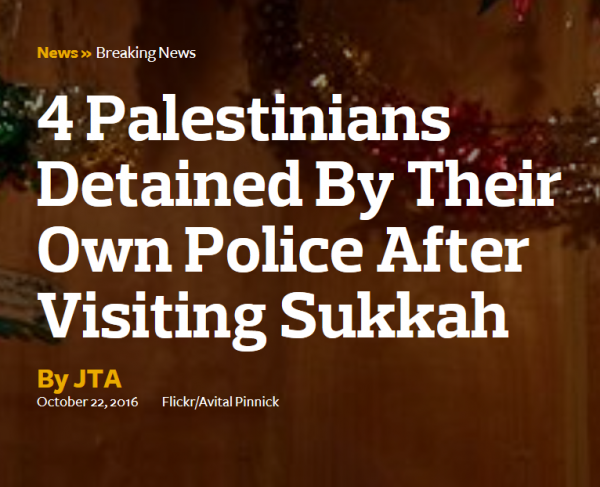 But according to news reports, it wasn’t immediately clear why the men were arrested. There was some initial speculation that the interrogation was launched because they were photographed with prominent Israeli army and police officers. Revivi was even accused by some family members of the men detained for having tricked them and for setting a trap, charges that he adamantly denied.

In fact, subsequent statements by PA officials, including PA Deputy Governor of Bethlehem Muhammad Taha, revealed the true reason for the investigation and the 4-day incarceration: under Palestinian Authority law cooperating with or “visiting settlers is completely unacceptable.”

If they knew that there would be a punishment and that they will be pursued for doing that, then the incident would not have happened.”

Arrested by the PA for the crime of "normalization" – in a Sukkah https://t.co/7HnaH5Mkpo pic.twitter.com/uJ87vGQapt

Over the weekend, an anguished Revivi said it was unacceptable for anyone to be targeted for taking part in a peace event at his home. In a statement, he slammed the continued incarceration:

PM Netanyahu also weighed in yesterday, pressing for the men’s release on a Facebook post. He took the opportunity to also blast human rights NGOs for hypocritically highlighting every alleged Israeli transgression while remaining silent about Palestinian Authority violations: 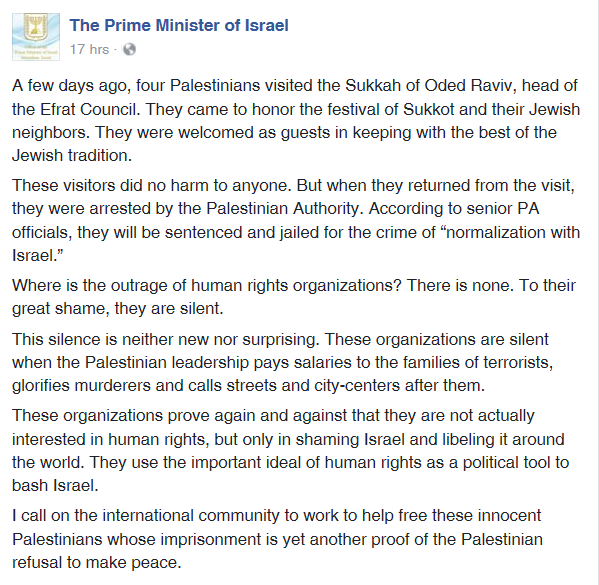 It’s not clear whether the mayor or Netanyahu’s statements had any impact. The Israel Radio report indicated that Israel’s Coordinator of Government Activities in the Territories (COGAT) had also intervened on the men’s behalf and that this was instrumental in securing their release.

As of this writing, there was no confirmation as to whether any charges had been pressed against the Palestinians who visited the sukkah.

This latest pathetic violation of the rights of Palestinians as citizens under Palestinian Authority rule reminded me of the time back in 2014 when various PA officials denounced a soccer match for Israeli and Palestinian kids, organized then by the Peres Peace Center.

The friendly game was roundly condemned as an intolerable form of “normalization with Israel.” Jibril Rajoub, Deputy Secretary of Fatah’s Central Committee and head of the Palestinian Supreme Council for Sports and Youth Affairs, actually called it a ‘crime against humanity’. 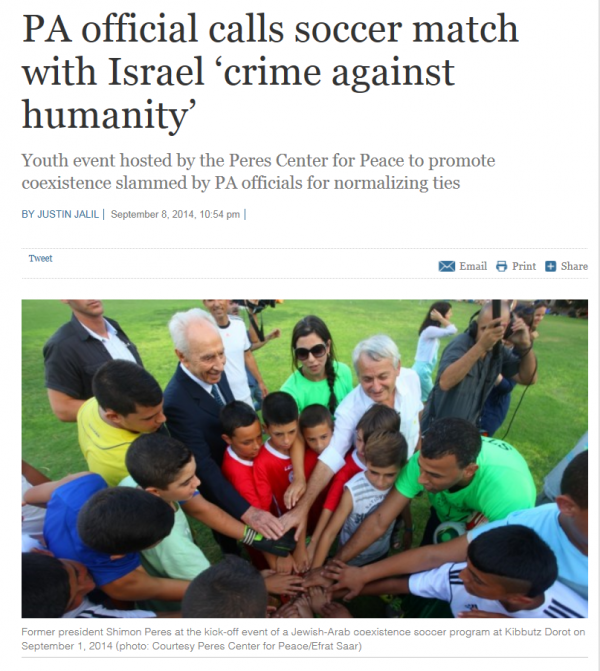 Then too there were calls that the organizers of the tournament should be interrogated and prosecuted for their “serious treason against the blood of Martyrs.”

As we’ve highlighted in numerous posts (see, for example, here and here), Fatah (the movement that dominates the Palestinian Authority) and its leader PA President Mahmoud Abbas, routinely herald and praise Palestinians who murder Israelis as heroes and ‘martyrs’, honor them with, among other things, street signs, statues, and honorary degrees, and pay them handsomely for their crimes. 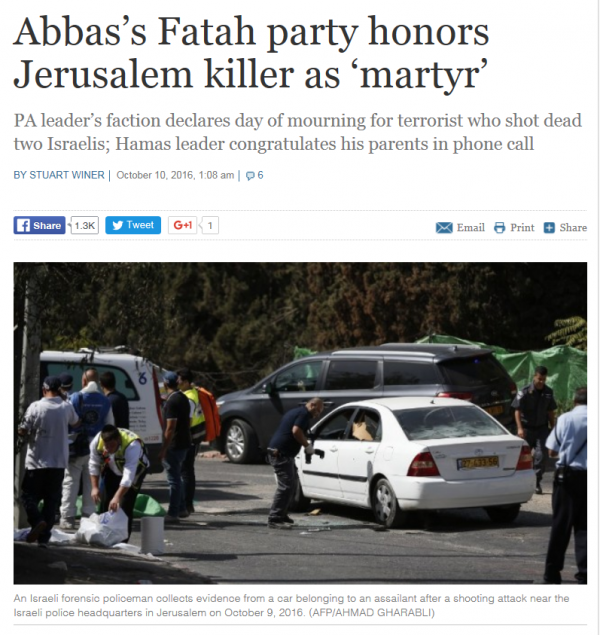 Apparently for the so-called PA “moderates” killing Jews is OK, but playing sports or sharing a few drinks with them in a Sukkah—not so much.

Miriam F. Elman is an associate professor of political science at the Maxwell School of Citizenship & Public Affairs, Syracuse University where she was recently appointed the Robert D. McClure Professor of Teaching Excellence. She is the editor of five books and the author of over 60 journal articles, book chapters, and government reports on topics related to international and national security, religion and politics, the Middle East, and the Israeli-Palestinian conflict. She also frequently speaks and writes on the Boycott, Divestment, and Sanctions (BDS) anti-Israel movement. Follow her on Twitter @MiriamElman

And Israel is supposed to “negotiate” with the PA?