Then doubles down with more honors after controversy. 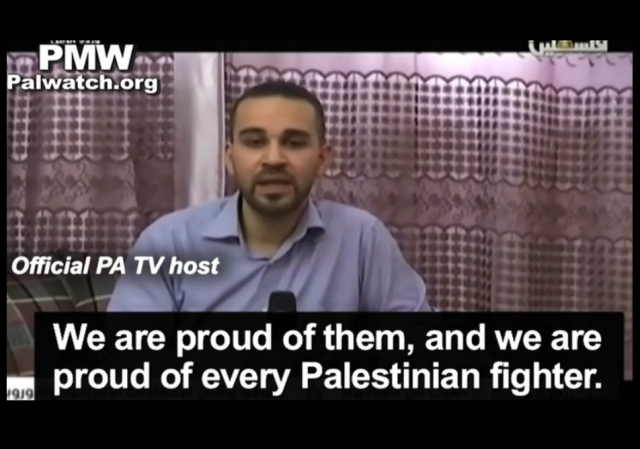 In April I wrote about Israeli tour guide Kay Wilson, originally from Britain, and American tourist Kristine Luken, Britain outraged by Palestinian payments to terrorists “who left this British woman for dead”:

She frequently makes reference to how she was carved up and butchered by Palestinians, but harbors no hatred of Palestinians. Israelly Cool has extensive archives on Kay Wilson.

I never really knew her story, though. But that story is in the news in Britain as part of the British coming to terms with their role in supporting terrorism against Jews in Israel through financial aid to charities and the Palestinian Authority….

Kay Wilson is in the news because The Daily Mail has an extenstive write-up on her story, and how the terrorists who butchered her are being paid by the Palestinian Authority while in prison, a common benefit bestowed on those who murder or maim Jews.

Accompanying Wilson that day was Luken, exploring the Christian roots in the Holy Land. Luken did not survive.

Wilson’s ordeal is detailed in the prior post, and in the TED Talk, Step By Step: The Idiot’s Guide To Surviving A Machete Attack:

Wilson and Luken are back in the news. It was not enough that the Palestinian Authority paid benefits to the the families of the men who butchered them.

Last week, official Palestinian Authority TV decided to honor Palestinian terrorist murderer Kifah Ghneimat. On Dec. 18, 2010, Ghneimat and his accomplice Iyad Fataftah attacked and stabbed two women, Kristine Luken – an American Christian tourist, and British Israeli Kay Wilson, as they were hiking in a forest near Beit Shemesh. Luken was brutally stabbed to death and Wilson was critically injured and left for dead. After the terrorists fled the scene, Wilson forced herself to get up and walk for help. Wilson has described the attack, the cruelty of the terrorists and her will to survive:

“He stabs me in the back so hard that I fall to the ground…
and he is repeatedly plunging his machete into me.
He’s doing it with such force that I can hear my bones crunch
and as he tugs out that serrated blade I hear my flesh rip”
(See longer excerpt and link to video below)

For their murder, Ghneimat and Fataftah are presented by the PA as Palestinian heroes. According to PA law, they have received monthly salaries from the PA since they were arrested in 2011. By now, entering their sixth year of imprisonment, they should be receiving 4,000 shekels/month – $1000. Since their arrest in 2011, each have received more than $30,000 from the PA.

That’s not the end of the story. Palestinian Authority TV was upset by PalMedia Watch’s July 1 post, which gained a fair amount of attention. So PA TV lashed out and doubled-down in praising the killer. PalMedia Watch reports on this new development, PA TV sends greetingsto stabber of Kay Wilson and killer of Kristine Luken “in defiance” of PMW :

Last week, Palestinian Media Watch exposed that a Palestinian Authority TV program named Giants of Endurance had honored the terrorist who brutally stabbed Kay Wilson and murdered Kristine Luken in a forest near Jerusalem. PMW’s story was reported in the international media, including Fox News and the Daily Mail in Britain.

This week, PA TV decided to honor four additional terrorists, four brothers who in total are serving 18 life sentences in Israeli prisons. But before interviewing the mother of the four terrorists, the PA TV host condemned last week’s PMW report – which exposed their terror glorification – as “incitement,” and then sent “greetings” and “all our respect” to the terrorist murderer “in defiance of the occupation.” In this case, the term “occupation” seems to be PA TV’s euphemism for PMW who exposed the story:

Official PA TV host: “A few days ago there was a campaign of incitement by several of the occupation’s websites (i.e., reference to PMW report) against our program because we visit the prisoners’ mothers. The latest was the mother of prisoner Kifah Ghneimat from Hebron (i.e., stabbed Kristine Luken to death and critically wounded Kay Wilson) to whom we send our greetings and all our respect, in defiance of the occupation…”

Following its condemnation of PMW, PA TV then interviewed the mother of four brothers, all terrorists, who between them are serving 18 life sentences in prison. After interviewing the mother, PA TV honored these terrorist murderers as well, saying:

Certainly there are bad people in very society. But the way the society reacts is what matters. As I noted after Jews burned to death Mohammed Abu Khdeir in retaliation for the kidnapping and murder of three Israeli teens by Hamas operatives, Israeli reaction to murder of teen a sign of Israel’s moral strength:

Every society has its murderers. How the societies react is the true test of morality.

Recent events prove that Israel is capable of meeting that test. When Palestinian society shows a similar strength, peace will be possible.

Unfortunately, peace is not yet possible.

I can think of a lot of words to describe a young male who would butcher a middle-aged woman. But “fighter” isn’t one of them. Neither is “man.”

All Pali’s out of West Bank, Gaza, Golan Heights, Jerusalem, Judea and Samaria.