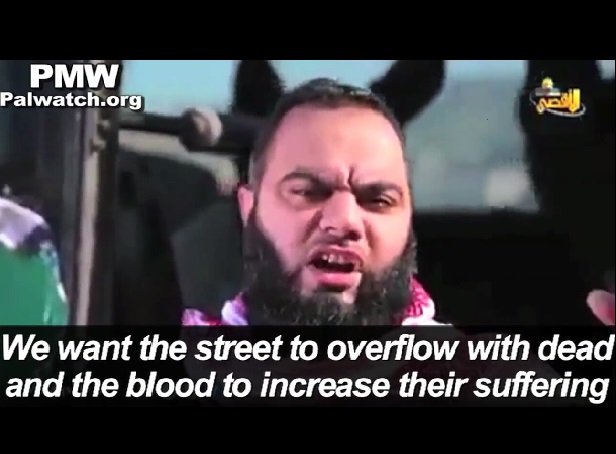 Even before the smoke could settle over the site of yesterday’s bus blast in Jerusalem that left 21 people wounded — two of them seriously — the Palestinian leadership is praising and celebrating the  terror attack.

The armed-wing of PLO-Fatah, active in the territory under Palestinian Authority control, applauded the Jerusalem bus blast, calling it the beginning of a new phase in Intifada, the renewed campaign of terror against Israel. Hamas, the Islamist outfit controlling Gaza said it “welcomed” the Monday’s terrorist attack, calling it “natural reaction” to supposed Israeli crimes.

In the eyes of these terrorist groups, the mere presence of Jews in their historic homeland amounts to a provocation and the Jewish sovereignty over the land of Israel constitutes a crime — severe enough to justify a deadly campaign of terror and incitement that started much before the State of Israel was even proclaimed.

Monday’s bus blast comes just days ahead of the Jewish holiday of Passover, which begins on Friday. Thousands of Jewish tourists from around the world are expected to visit Jerusalem during the Passover season.

Following the terrorist attack, video footage of Hamas supporters cheering and handing out candies in the streets of Gaza has surfaced. On Hamas-run TV channel the moderator could be seen giving military-style salute while reciting verses glorifying the terrorists who carried out the heinous attack in the backdrop of an image depicting rivers of blood flowing through the map of Israel.

Shortly after the Jerusalem bus terror explosion attack on April 18, a number of Palestinian factions rushed to issue statements applauding the “heroic operation” and urging Palestinians to pursue the path of armed struggle against Israel.

The Palestinian jubilation over the terror attack, the first of its kind since the suicide bombings during the Second Intifada more than a decade ago, is yet another reminder of the growing radicalization among Palestinians. This radicalization is mostly attributed to the ongoing anti-Israel incitement and indoctrination by various Palestinian factions and leaders.

Smaller terrorist group operating under the protection of Hamas and PLO-Fatah such as the “Islamic Jihad” and Marxist PFLP also echoed similar sentiments of joy at the sight of more blood and mayhem. The current wave of terror that started around October last year has taken the lives of 31 Israelis and wounding more than 400. During this renewed wave of violence, Arab terrorists carried out more than 200 stabbings, 83 shootings, and 42 car rammings.

Palestinians in #Gaza celebrate and give out candy after #Jerusalem terror attack injures 21 pic.twitter.com/TQRy3v0iVz

This ongoing campaign of violence is the result of Jihadist indoctrination and anti-Semitic incitement of Arab youth growing up the under the rule of Palestinian Authority and Hamas. Young and impressionable minds have been taught to hate the Jews and glorify death through martyrdom. Not only school curriculum and mosque sermons, but even TV shows for kids and summer camps are devised to rear a generation cannon fodder for Hamas-Fatah in their war against Israel.

Mainstream media has miserably failed in objectively reporting this wave of violence — often failing to distinguish between the victims and the perpetrators of terrorism. Major news agencies like the Associated Press and Reuters have repeatedly ublished erroneous headlines portraying Arab terror perpetrators taken out by Israeli security forces as actual victims of violence.

In October 2015, NBC’s Ayman Mohyeldin said in a live report that an Arab shot dead by Israeli police was unarmed – while NBC’s own footage of the same incident showed the attacker carrying a knife-like object as a charged at an Israeli police post.

Media loves to obfuscate the issue by talking about ‘Palestinian grievance’ and ‘suffering’. Even as International aid worth tens of billions of dollars handed over to Palestinian authority has failed to lift the lot of its people in any measurable way. Forget US and UK, even India pays tens of millions of dollars  to “help the poor Palestinians.” This money goes into build the terrorist infrastructure, pay salaries to convicted terrorists, and finance the jet-setting lifestyle of PLO-Hamas oligarchs.

PLO-Hamas ruling class has no interest in uplifting the people they purport to represent. Especially if the self-inflicted misery comes handy in whipping-up a frenzied campaign of incitement and hate against Israel and the Jewish people.

If UN and international community really seeks peace in this conflict, they must stop pumping billions of dollars funding Arab campaign of hate and incitement. If Arab abandon their campaign of terrorism and war against Israel; there will be peace.

Sigh, I’ve heard the same thing every time a Palestinian opens his mouth. Problem is, there ain’t no such thing as a ‘Palestinian Homeland’ – look to Trans-Jordan for their homeland.

Keep publishing, and include the video links.

The first few times I was exposed to the Palestinian TV indoctrination programs was via The Sandmonkey’s blog during the Iraq war. The reason he published them was that there was this ongoing refusal by his Muslim readers to believe that any of this was happening.

We have to defeat the Islamist Perverts because they insist on causing chaos wherever they go. We can defeat them, but if we have to do it alone, it will take longer and the butcher’s bill will be very high. That is why we need Muslims to take up the cause of ridding their religion of the president-day class of perverts. It has been gratifying to see that more and more prominent Muslims recognize the problem (or that our own media are passing on the stories).

Like Abraham in the story of Sodom and Gomorrah, I flinch at the notion that an entire religion should be destroyed for its depravity. I choose to believe that there are large numbers Muslims that should be spared. I have hope that we can have peace on earth, but I recognize that such a development depends upon the actions of men of good will.

Perhaps they’re waiting for a Mandela-like terrorist to validate the left and inspire their allies to progress.