Dedicates monument in Ramallah to Ahmad Ibrahim Jbara (aka Ahmad el-Sukar), who carried out 1975 attack. 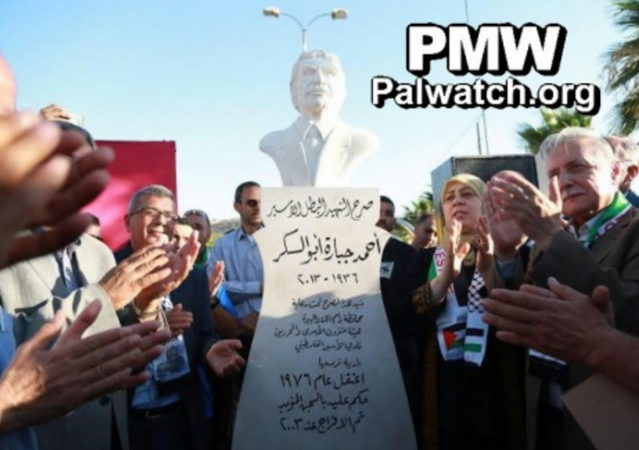 On July 18, 2016, in a well-attended public ceremony in downtown Ramallah, the Palestinian Authority (PA) honored the life and work of Ahmad Ibrahim Jbara.

Jbara, also known by his nom de guerre Abu Sukkar, was a terrorist who masterminded a deadly 1975 bombing attack in Jerusalem in which 15 people were murdered and nearly 80 wounded when a refrigerator packed with explosives detonated.

For this heinous crime, Abu Sukkar was sentenced to life plus 30 years. In an Israeli prison, he would become among the most well-compensated individuals within the Palestinian community, benefiting from a generous monthly salary bestowed on him by the PA.

In 2003, Israel released him along with 99 other prisoners as a ‘good will gesture’ to the PA on the eve of a summit meeting in Jordan.

Abu Sukkar immediately joined the Palestinian leadership, serving as an advisor on prisoner affairs to the late PA Chairman Yasser Arafat. It was a plumb job to which he was entitled according to PA law, which requires released prisoners guaranteed government employment.

He reportedly held the position until he died of natural causes 3 years ago at which time he was honored by the PA:

Abu Sukkar was the perfect example of how Palestinian terrorists have benefited over the years from PA largesse: the routine payment of monthly salaries to convicted terrorists serving out their sentences in Israeli jails, and programs that ensure them cushy employment opportunities upon their release.

On July 4, 1975 Abu Sukkar (along with a Palestinian accomplice who escaped to Jordan) carried out a notorious terror attack in Jerusalem’s Zion Square.

Packing 5 kilograms of explosives into a refrigerator, he hauled it into the crowded center of town. A timing device set off the hidden explosives.

In a moving video recorded in Zion Square several days ago, Israel’s Foreign Ministry Director-General Dore Gold recalls being an eye-witness to the carnage on that summer day 41 years ago.

PA should promote a culture of peace, rather than death. The monument, honoring a mass-murderer must be torn down. pic.twitter.com/m6JVPY2PVI

At the time he was a 21-year-old undergraduate student living in Jerusalem. He was in town doing some shopping when the fridge exploded. He describes turning around and seeing “bodies strewn everywhere”:

PA Unveils a Monument of Abu Sukkar, the “Refrigerator Bomber”

As part of the ceremony, the PA and Fatah honored Abu Sukkar.

Numerous senior officials participated in the public unveiling of a statue in Ramallah that, as noted on its text, will help educate future generations to admire the ‘Heroic Martyr, prisoner Ahmad Jabarah Abu Sukkar’.

PA officials during unveiling a monument dedicated to a terrorist who murdered 15 Israelis:He's a hero& a role model pic.twitter.com/Z7NRA6UHfI

Attending the event, posing for photos, and delivering speeches that heaped praise on the terrorist was the Director of the PLO Commission of Prisoners’ Affairs (Issa Karake), the Governor of Ramallah and El-Bireh (Laila Ghannam), Chairman of the Palestinian Prisoners’ Club (Qadura Fares), and a PA Parliament Member (Qais Abd Al-Karim).

According to a report of the event published by the watchdog group Palestinian Media Watch (PMW), Abu Sukkar was lionized in various statements as a “protector of human rights”, a “great man”, and a “resolute freedom fighter”.

this monument is intended to implant in the minds of sons and daughters that we are continuing to be loyal to the path of the Martyrs…Ahmad Abu Sukkar is a real man, a fighter, and a man who left his impression on everyone, and who was a school for giving, resolve, and courage. We are proud of him as one of the symbols of the Palestinian national struggle”.

Karake’s speech and others were subsequently reproduced in the official daily newspaper Al-Hayat Al-Jadida to be read by those who couldn’t attend in person.

Tear Down That Monument

Several weeks ago, when learning of the plan to establish the monument, Prime Minister Benjamin Netanyahu publicly called on PA President Mahmoud Abbas to cancel the event because of the “negative impact terror glorification has on children”:

The PA paid no attention and went through with the ceremony.

Now Dore Gold is asking Abbas to “tear down that monument”.

It’s a request that’s likely to be ignored. After all, it was Abbas who eulogized Abu Sukkar as a ‘pure soul’ and a ‘righteous son and loyal fighter’ during his funeral on July 17, 2013, when he was buried with full official military honors. 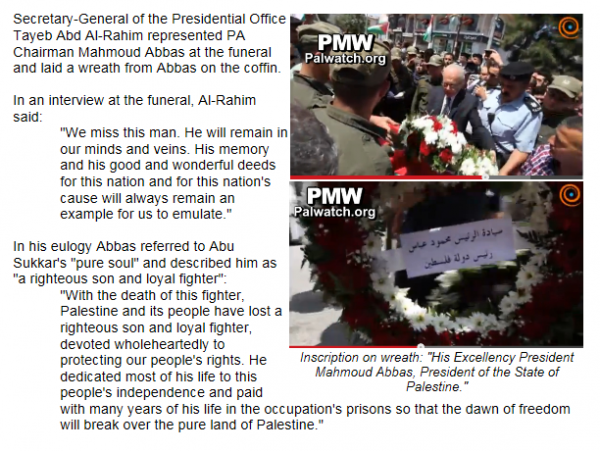 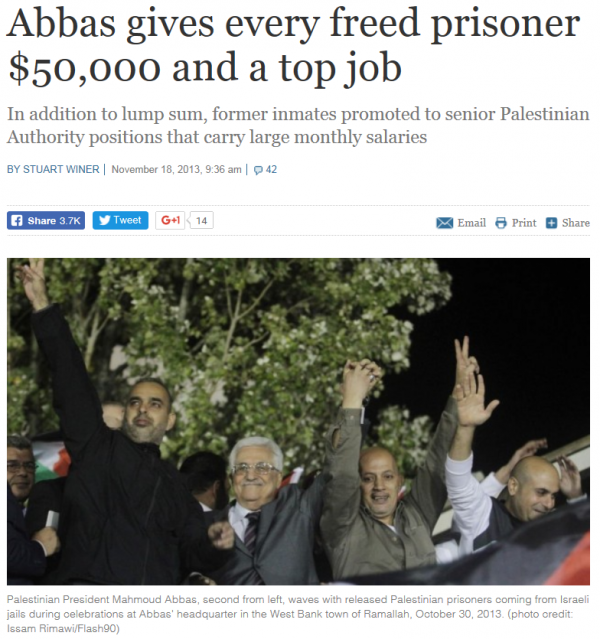 Credit: The Times of Israel

Abu Sukkar wasn’t any two bit, run-of-the-mill terrorist. As a mass-murderer with a lengthy prison sentence, he was eligible by PA law to a top salary and hefty bonuses.

The PA has for years paid above-market salaries to terrorists like Abu Sukkar while they’re incarcerated in Israel’s jails. The payments are made for the duration of the perpetrator’s jail sentence and are also pegged to their length, on a sliding scale. And only terrorists and their dependents are eligible for the benefits—those incarcerated for other crimes against Israelis, like burglary, don’t get anything.

So salaries rise depending on the seriousness of the crime. The more people murdered, and hence the longer the prison sentence, the higher the salary. 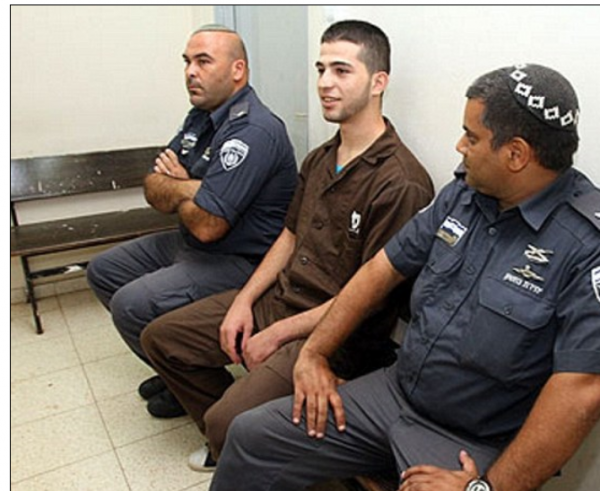 Hakim Awad, center| 5 life sentences for the murder of five members of the Fogel family while they slept, including children ages 11, 4, and 2 months | Credit: Daily Mail

To be perfectly clear: this means that Palestinians who were behind some of the bloodiest terror attacks of the Second Intifada are today getting six-figure salaries. They include members of the Hamas terror organization who are now serving time in Israel’s maximum-security prisons for their crimes. 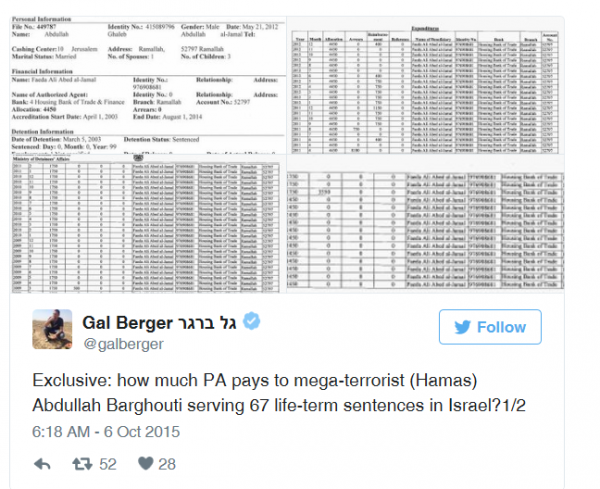 The salaries are specified by the 2004 Law of the Prisoner and by subsequent PA legislation and government decrees. An oversight organization, the quasi-official Prisoner’s Club, ensures that the PA complies with these laws and prioritizes the payments in its annual expenditures.

The entire scheme works only because the cash-strapped PA can divert funds from foreign aid in order to cover the payments. Donor countries supply a sizeable chunk of the PA’s approximately $4 billion annual budget (the U.S. contributes roughly 10% of the PA budget in the form of foreign aid—more than $400 million annually). The PA simply wouldn’t be able to keep up the “pay to slay” system without being able to siphon off annual foreign aid contributions from the U.S., the UK, Norway, Denmark, Australia and other countries. 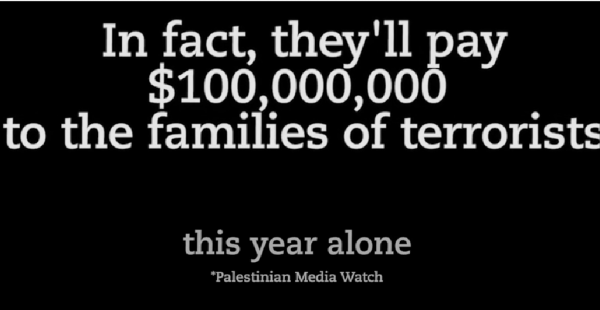 Basically, the PA has exploited loopholes in foreign aid provision in order to keep its payouts to incarcerated terrorists flowing.

Back in August 2014, PA officials cooked up a plan to sidestep international criticism, conceal direct payments to terrorists and their beneficiaries and circumvent existing U.S. law that prohibits terror financing, by moving the administration of the payments from the PA’s Ministry of Prisoners Affairs to an agency within the PLO.

The hope was that this “face-saving dodge” would convince gullible donor countries that the aid earmarked for the PA wasn’t actually being used to pay killers.

For awhile the ruse worked. But now the West Bank governing authority is coming under intense pressure to put a stop to the practice.

The Palestinian Authority’s routine diversion of foreign aid to pay out generous stipends and benefits to terrorists and their beneficiaries has now taken center stage.

The issue has garnered more attention in recent months amid the wave of murderous knifings and car-ramming attacks in Israel, and the PA’s incessant glorification of the killers in official media channels. 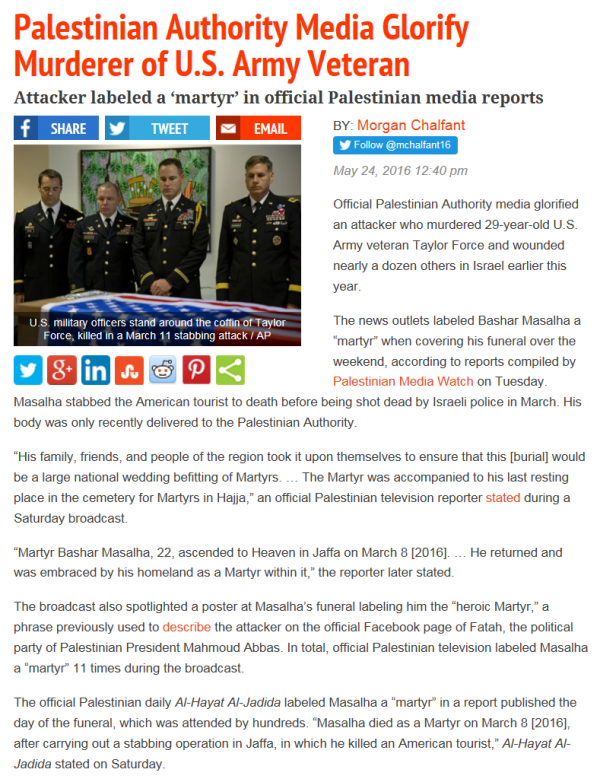 Fresh outrage was also sparked by the vicious killing last month of a 13-year-old American-Israeli girl. The family of the teenaged Palestinian who murdered her while she slept in her bed was promised a steady monthly stipend of $350 per month as a ‘martyr’s payment’ for his brutal crime. 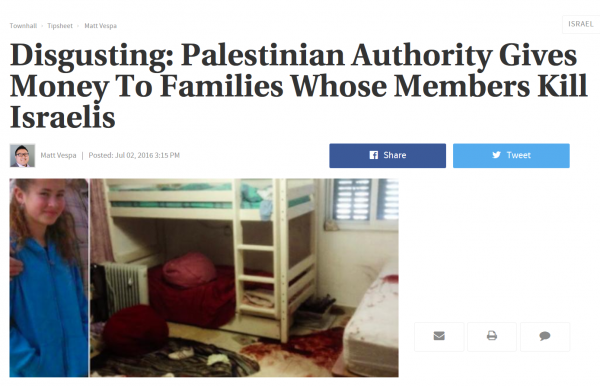 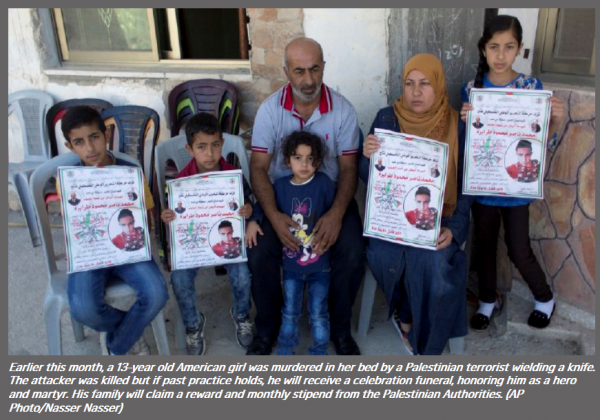 NGOs familiar with it have recently been invited to provide expert testimony on the Hill.

And Congress is now exploring new options to stop these Palestinian convict stipends, including cutting U.S. budgetary support by the amount that the PA, or any of its subsidiaries (like the PLO currently), spends on terrorists’ salaries (next year’s State and Foreign Operations Appropriation Bill now has this language inserted, approved by the Senate subcommittee in June).

Some members of Congress, including Rep. Ted Yoho (R-Fla.), Sen. Coats, and Rep. Royce, have even recently said that if the PA’s “irresponsible policies” continue, then U.S. financial assistance to the PA must be “completely suspended” until the policy is changed.

There’s a consensus that the practice constitutes a direct inducement to commit terror, exacerbating the threat by “diluting the deterrent of a prison sentence”.

But PA officials have recently scoffed at the notion that the payments incentivize violence, insisting that the funding is akin to “welfare payments”.

Qadura Fares, who heads the Palestinian Prisoners’ Association, and as noted above proudly participated in the unveiling of the Abu Sukkar statue in Ramallah last week, reportedly said:

The children of the prisoners and martyrs and wounded have the right to go to schools, hospitals and get food”.

The claim is completely disingenuous.

Even the offspring of killers are entitled to some basic government assistance. But if the payments were really just a kind of “social protection” for families, then they would be based solely on the financial needs of dependents and not on the nature of the crime committed, with the perpetrators of the most gruesome terror acts being awarded the largest bounties.

The payments are being made because the terrorists are perceived to deserve them. That is, the salaries are paid because of the “high esteem in which these terrorists are held”. 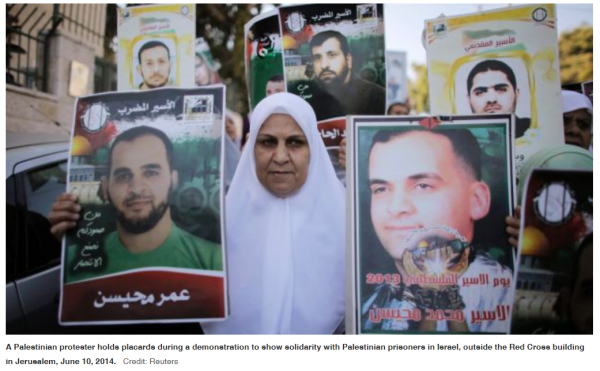 At first blush it seems bizarre that the Palestinian Authority would decide to honor yet another notorious mass-murdering former prisoner like Abu Sukkar in a media-hyped event at a time when the U.S. and some European countries (see here, here, and here) are investigating, and even considering a reevaluation of, their foreign aid programs.

But actually it makes perfect sense.

So continuing to glorify killers like the “refrigerator bomber”, and paying handsomely for their upkeep, is a smart move politically.

Did he use one of those refrigerators Secretary of State John F. Kerry is warning us about?

The solution is no two- State solution. How could it?
I think Allah should take the refugees. Besides, they’re not refugees, it’s been 70 years. The refugees were gone long ago.