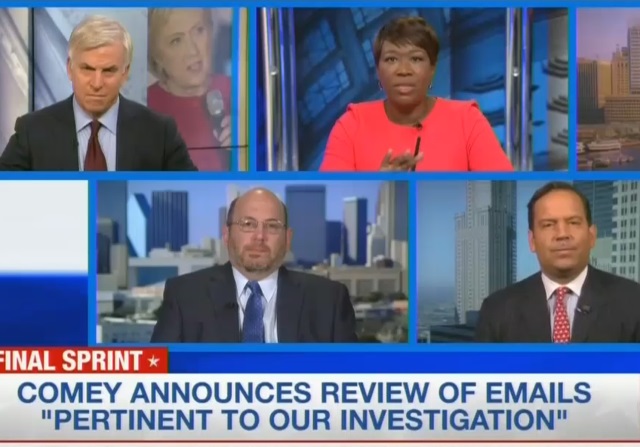 Joy Reid and Kurt Eichenwald are a liberal-media hit team made in heaven—or somewhere else, depending on your perspective. Reid has the habit of rudely cutting off or correcting conservatives brave enough to venture onto her show. Eichenwald’s MO is to laugh nastily in the face of conservatives with whom he disagrees.

We’ve documented this before, as here, here and here, and it happened again this morning. On Reid’s MSNBC show, AM Joy, when Trump surrogate Steve Cortes suggested that Hillary Clinton has jeopardized national security with her mishandling of emails, Reid shut him down: “you know better than that. I respect you too much to let you go on a rant that is full of unfactual information, sir.” Reid then turned it over to Eichenwald to attack Cortes, saying “your witness,” as if Cortes were fodder for cross-examination.

A bit later, when Cortes mentioned that [the very liberal] Carl Bernstein of Watergate fame had said that it must be a “bombshell” that moved FBI Director Comey to issue his latest letter, Eichenwald broke out in derisive laughter.

Note: Reid also tried to undermine Cortes’ credibility, saying “I know you have a job to do here as a surrogate.” What is the rest of Reid’s panel, including Eichenwald, April Ryan of American Urban Radio Networks, notorious Clinton apologist Joe Conason and Reid herself, but media surrogates for Hillary Clinton?

STEVE CORTES: Well, listen, Joy, I think it’s important to note, by the way, that we are not cheering this by any stretch. I’m an American first, before a partisan. And as an American, I am very troubled that our Secretary of State jeopardized our national security as often and as badly as she did. The Clintons want to get back into the White House. They want to occupy our highest public office, yet they have acted for decades in the shadows and they want to have it both ways. Secret servers, tens of millions of dollars —

JOY REID: There is nothing that we just discussed that has anything to do with jeopardizing national security, Steve. You know better than that —

REID: I respect you too much to let you go on a rant that is full of unfactual information, sir.

REID: No, no, no. What is at issue here in this new release is the discovery of Huma Abedin’s — actually, let me let Kurt Eichenwald who is doing the reporting on this tell us what we know about what this new tranche of e-mails is about. Because I didn’t read anything in any statement that Comey has made that talks about jeopardizing national security or even e-mails to or from Hillary Clinton. Kurt Eichenwald, your witness.

. . .
REID: And Steve, you know, the point that I want to make to you, Steve — and I know you have a job to do here as a surrogate. But if we are now criminalizing the mundane, at least in the minds of the public, casting an aspersion that — to the public can sound as if some crime was committed when what we’re really talking about is an aide to a politician printing things out for her boss and unfortunately being married to a creep. If that now becomes the basis to cast a broad, sweeping aspersion on somebody who yet can be President of the United States, politics only goes downhill from there, Steve. Is that the kind of politics you want to be a part of?

[Eichenwald can be heard bursting into loud laughter]

CORTES: — who knows quite a bit about political scandal. Carl Bernstein said, this is, quote, a bombshell. He said it is unthinkable that the Director of the FBI would take this action lightly. So, he believes it’s a bombshell. I think most of the American public understands this is a bombshell.

CORTES: It is yet more evidence that Hillary Clinton is disqualified from serving as our Commander-in-Chief.

As regards this show, I can say I’m glad my life is Joy-less as I have no need of such Kurt-ness!

Any ideas of how to fix this? Because I’ve been hearing about it for some 20 years now.

I know, I know – we want to take the High Road. Be seen as civil and cultured. No violence please. Don’t even raise your voice. In fact, its petty and tedious to even complain about it.

Taking the high road is so enlightened. Although the air is a bit thin. They company a bit snooty. And what’s with all these gravestones that litter the landscape? Lots of people with “Principle” that never did us any good.

Just you go and lock and load, and man your lil’ barricade. We’ll look for your comments from behind bars.

Well of course Rags would demonize me for challenging the status quo. He prefers the more “civil” GOP where we are thrown under the bus without making a scene. It’s simply not respectable to openly discuss the Failure Theater of our own leadership. We might not get invited to the right parties. Or that table at Martha’s Vineyard we’ve been pining for, the one closer to Oprah? Gone.

Conservatives have become like the Jews of 1930s Germany. We think its some great victory that we get the word out on underground radio. Yay! We can discuss how they censor us over on Legal Insurrection! Woo-hoo! That’ll teach them.

I swear, Obama could come for everyone’s guns tomorrow and not a single one of us would do a damn thing to stop it. One by one we would each cave. But we sure would talk a lot about it.

That’s why we will lose. We won’t fight. Yes we care about Liberty, but we won’t play dirty to keep it. That would be …deplorable.

So I’m calling it now – at the Indoc Center, the lower bunk by the window is MINE.

No, actually I’m more radical than you. Just not insane and given to magic thinking.

For instance, I think the nation would support real, fundamental tax reform.

Your Mr. Establishment does not.

Oh please. You are hardly radical. You’re an Establishment lackey. You’re the guy in the camps that reports us for counting the guards and measuring the time it takes them to walk a section of fence.

For a piece of fricken chocolate, no doubt.

“For instance, I think the nation would support real, fundamental tax reform.”

I “think” you are wrong. Your comment is typical of the purist that can never get anything done.

Trumps plan is an improvement over what we currently have. What you, or I, think possible is immaterial. Take what we can get until such a time exists we can get more.

You don’t get a QB who can’t throw a football.
You don’t rely on politicians who can’t handle such interviews.
I posted this yesterday, how Trump made mine meat out of George S.
https://youtu.be/H116med2VGU

I remember when Newt was making the Morning talk show circuits pre1994 he was excellent at this sort of stuff.

To use LeCarre term, this is the tradecraft of politics.

Why do non liberals subject themselves to crap like this? It just encourages them.

President Trump is coming, and the rule of law is coming with him.

From his tutelage under the wing of mobster Roy Cohn on, there is NOTHING in Da Pig’s history that shows any respect for “the rule of law” as any kind of limit on his own appetites.

Doesn’t matter what Trump thinks (and of course, you lie). The difference is how the MSM and Establishment will treat him compared to Hillary.

They will impeach him for the things they will let Hillary get away with. They hate him. Just look at the difference in media coverage:

“Trump grabs cat by tail and flings it into the curb.”

And Rags, why the frack are you on the side of the people who pull this bs? What’s your real story, a Soros paid troll to attack Trump? Or just a sore loser who ironically lectured us about party loyalty for the last decade?

Embrace the power of AND.

Joy Reid is just another loony in a long list at MSNBC!

MSNBC is nothing but a propaganda machine for left causes.