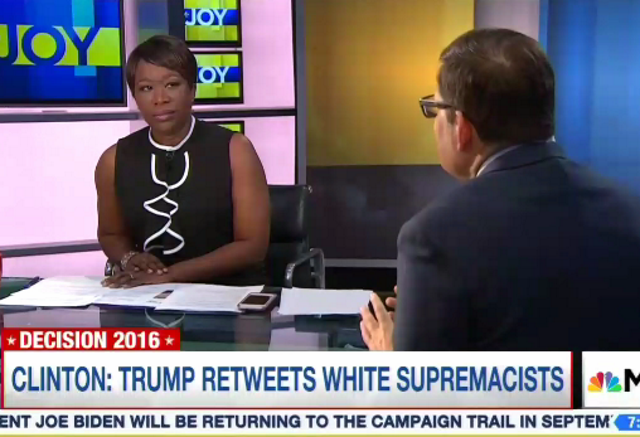 Hillary has said that she “admire[s] Margaret Sanger enormously.” Reid responded by saying Sanger was not a legitimate issue because she is a “dead person.”

Even worse, when Aguilar tried to make that point that a majority of abortions performed by Planned Parenthood are on minority women, Reid shut Aguilar down, calling his statement “incredibly offensive. I think that smear of Planned Parenthood cannot go forward and we’re not going to continue with that line of questioning.” Reid abruptly returned to another Trump-bashing topic.

ALFONSO AGUILAR: I don’t want to give the impression in any measure that I love Mr. Trump’s comments, the comments that he’s made now or during the primary. I find many of those comments offensive. And yes, I think they have encouraged some of those groups, absolutely. To say that it was intentional, very well-organized, strategic, I think that’s going —

REID: He intentionally hired — I want to talk — he does control his own Twitter account. And he is retweeting white nationalists. If you’re following them and they’e somehow in the stream of your social media, that is not moral.

AGUILAR: I would argue we shouldn’t have a double standard. Margaret Sanger, let’s talk about —

REID: That is not a double standard. You’re mentioning a dead person. Hold on a second. Planned Parenthood is not a eugenicist organization. I think that’s incredibly offensive.

AGUILAR: 52% of all abortions are performed on Latino and African-Americans.

REID: I think that smear of Planned Parenthood cannot go forward. We’re not going to continue with that line of questioning.

Reid’s tactic of silencing a calm, substantive Hillary critic epitomizes the lengths to which the MSM will go to protect its favored candidate. A truly lamentable performance by Reid.

In other words, a typical liberal.

Where the hell are we? Zimbabwe? This is not fellow citizens, out of love for their country, debating the best course that will benefit the majority of our country the most. We have split into tribes and see other tribes as enemies.

There is no longer an “our”. There is now only “them”. Right now the “them” in control wants to destroy the other “thems”. We are becoming a third world country, not in the economic sense, but in the political and cultural sense.

I guess we should have thought to ask what he meant by that promise. He has certainly delivered.

Anchovy: I am old. 67. I recall the days of actual segregation, if not by actual law, it was by “knowing” that if you were black you didn’t go in the front door of a fancy hotel. The days when calling a hotel and asking if rooms were available got you a Yes if your name was Anderson, and Sorry Full Up if it was Goldstein.

But, I also remember it was a society that was FAR more unified than it is today.

Really, it’s been this way for a long time. When the Collective “debates” it’s all “SHUT UP!”, they explain.

It has gotten more bald-faced of late, but the reason you saw “panels” with three Collectivists and a (often not very articulate) conservative was so the other three could shout the one down.

Now they just shut down any debate pre-emptively.

I’m simply waiting for the conservative commentator to respond with “Your damn right it’s offensive!! I meant it that way. Because Sanger and PP are offensive. So, don’t like it? Suck it up, sweetheart! Meanwhile, I’m outta here unless you can behave like the journalist you are alleged to be!!!”

Could day in he’ll before that ever happens. 😀 : D:

Then my next response would have been, “So you can’t compare Trump to Hitler because Hitler’s dead, you genocide defending hypocrite?”

She needs to be asked how many abortions she’s had. This kind of anger is always a sign there’s a personal investment. She’s despicable.

“Frankly I had thought that at the time Roe was decided, there was concern about population growth and particularly growth in populations that we don’t want to have too many of.”

Then they lecture about tolerance and proclaim they are its advocate.

This is “Repressive Tolerance” made famous by Marcuse.

Free speech for me, not thee, and you are evil to even ask for it.

The Frankfurt School was wickedly efficient in their ability to spot the very best of our freedoms to be used against us to advance the Collective.

When your “principles” will not stand up to facts, suppress the truth and pontificate. Nothing to see here…move along.

Jim Crow is a dead person. I don’t want to hear that line anymore.

Sanger had a dream that one day class diversity would supersede individual dignity. Diversity schemes miss the individual for the class, a human life for the colorful clump of cells.

The State-established Pro-Choice Church promotes “selective-child”, not “one-child”. As for Planned Parenthood, there is the abortion division that carries out the “final solution”, but there is another division that practices clinical cannibalism.