“Y’all are guests in our house, please don’t use that terminology.” 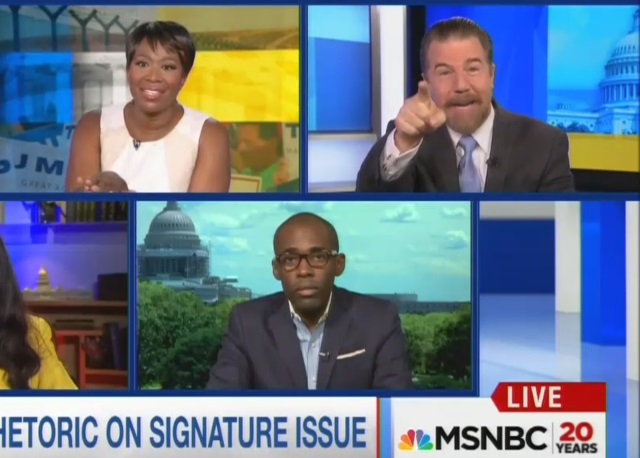 Joy Reid has a history of shutting down guests on her MSNBC show who disagree with her. Last week, Reid abruptly ended a segment when a conservative Latino guest tried to raise Planned Parenthood founder Margaret Sanger’s support of eugenics. Today, the ever PC-Reid instructed a Trump supporter not to speak of “illegals” when referring to illegal immigrants.

African-American Trump supporter Paris Dennard was making the point that Trump is not opposed to immigration generally, but to illegal immigration, and that illegal immigrants take jobs from black Americans. Dennard twice spoke of “illegals.” That led guest Juan Hernandez, a supporter of Libertarian Gary Johnson, to say he was “insulted.” Reid agreed, adding “this is like being in a family home. And when you’re in this home, we just ask that you please not use terminology that offends people. So y’all are guests in our house, please don’t use that terminology.”

The agile Dennard, a lonely voice for Trump in a sea of antagonists, brought up Hillary Clinton’s use of the term “super-predators” to describe young African-Americans. Replied Reid sarcastically: “good try, trying to take this conversation in a different direction.”

PARIS DENNARD: It’s not that we need to focus exclusively on or say that Mr. Trump is against immigration. It is the issue of illegal immigration. I’m from Phoenix, Arizona. So I know this issue well. And I have Hispanics, and actually Mexicans in my own family. And so, this is something that is very important to me. But to your point directly, Joy, the issue of illegal immigration, and those illegals that come over here, there is an issue with the black community as it relates to jobs and the jobs that may or may not be there. And so, we have to get to the bottom of this, because the browning of America is a good thing. The more entrepreneurs that we have in this country that are here doing it legally is a good thing. I like that. I like having taco trucks on every corner if that means that we have young people, millennials that are entrepreneurs and that are being a part of the American dream. But what we can’t do is continue to reward bad behavior and reward illegals that come in here. We have to fix the illegal immigration problem.

JUAN HERNANDEZ: I’m a little insulted by the word illegals.

JOY REID: Exactly. Thank you. I was going to say the same thing.

HERNANDEZ: Thank you, thank you very much. I really appreciate you using the right vocabulary.

REID: Amen. You said what I was going to say.

REID: We’re going to leave it at that. We’re going to say this is like being in a family home. And when you’re in this home, we just ask that you please not use terminology that offends people.

REID: So y’all are guests in our house. Please don’t use that terminology. We appreciate it.

REID: Paris, you keep on trying.

HERNANDEZ: That’s what we would like Trump to do, and I’m a Republican. We would like an apology to African-Americans, to women, to the handicap, to the —

REID: She did apologize. Hold on, hold on. The segment is over but Paris, good try, trying to take the conversation in a different direction.

The proper term is “illegal aliens,” because the text of the defining law uses that phrase.

Fighting over terminology is a common tactic to avoid discussing an issue.

I like the term criminal immigrant. They should use that.

How about “criminals”? A nice short word for the Soundbite Generation.

If that’s too accurate, how about “invaders”?

Anything with the word “immigrant” in it is unsuitable. The problem isn’t immigrants, the problem is criminals. This distinction is fatal to the lefty position.

Criminal Aliens should work. Immigrants come in legally and with the intention of becoming citizens.

We’re all God’s children . . . but we don’t all have the right to live in the United States.

If millions of American citizens illegally entered Mexico (or Guatemala, or China, or Saudi Arabia, or any other sovereign nation), and illegally set up residence there, and illegally took jobs and welfare benefits and enrolled their kids in public schools there, the Mexican government would be outraged, and justifiably so.

But when tens of millions of foreign citizens do the same thing here, we’re just supposed to shut up and take it, and not even mention the fact that what they’re doing is both wrong and ILLEGAL, because that might “offend” the law-breakers’ tender sensibilities.

the correct term is ‘ALIEN INVADERS’.

BTW why does this site focus so much on MSNBC ?
who actually watches those shows (besides die hard Lib_Rules) ?

Why focus on MSNBC?

If you want to entertain yourself by watching morons make fools of thsmselves, you go where the morons congregate.

While MSNBC has, at last tally, approximately ten viewers, they do, sadly, reflect the “ideals” and “values” of the progressive left. Such as they are.

We need to know what they think and how they think if we can ever hope to combat it effectively. Know your enemy.

Frankly, I’m thankful for Mark’s posts. He watches so I (and we) don’t have to. 😉

Illegal creates an impression of a society governed by laws or rules.

That said, [class] diversity schemes give the impression of “skin color”-based discrimination. Selective exclusion (“=”) creates an impression that not all orientations should receive equal protection. Fetus, not fetal stage, makes people believe in the fantasy of spontaneous conception. Abortion rites should be rightly described as “the final solution” (ending a human life presumably for a capital crime). Planned Parenthood is a corporation that carries out abortion rites in its abortion chambers, and their Mengele division subsequently cannibalizes the lucrative parts. Redistributive change without a robust “final solution”, progressive wars, etc. is trickle-up poverty. Feminism is a political female prejudice is female chauvinism which is hostile to women, men, and babies, too. Pro-Choice is a religious/moral philosophy (of selective and arbitrary principles) organized under a State-established Church that receives its instruction from the twilight zone (a.k.a. “penumbra”) as preached by liberal judges.

When someone ask that you not use the appropriate term do you really have much need to speak with them?

The only appropriate response is mockery if you are ever on a show that pulls this kind of touchy-feely censorship.

After about the twentieth repetition….

I prefer this approach…

REID: So y’all are guests in our house. Please don’t use that terminology. We appreciate it.

SCEEEEEERUUUUUUW that, Joy. This isn’t “your house”. This is a public forum, and you are not the censor here.

I’ll use the terms I chose, and they are apt, legal, and on-point.