AM Joy-less: Reid Rudely Shuts Down Yet Another Republican

AM Joy-less: Reid Rudely Shuts Down Yet Another Republican 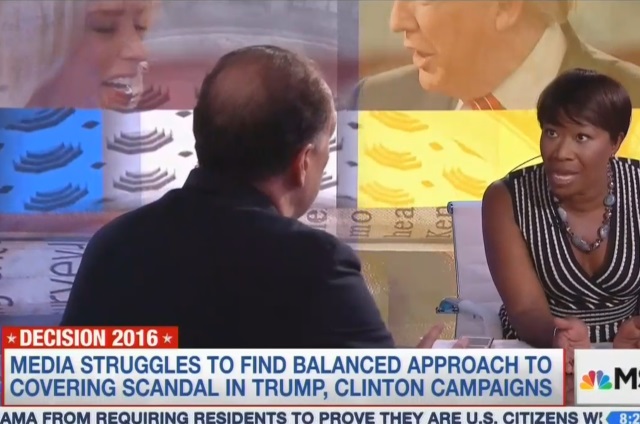 Joy Reid has to be the rudest “host” on American TV. On her misnamed AM Joy show, Reid has made an art form out of interrupting and shutting down “guests” who don’t toe her liberal line. We’ve reported how Reid abruptly ended a segment when a conservative Latino tried to mention Planned Parenthood founder Margaret Sanger’s support of eugenics. Then it was an African-American Republican who was chastised by Reid for daring to speak of “illegals.”

Today it was the misfortune of David Malpass, who held senior positions in the Reagan and H.W. Bush administrations and now serves as an adviser to Donald Trump, to be subjected to Reid’s rudeness. When he tried to raise the pay-to-play nexus between the Clinton Foundation and Hillary’s State Department, Reid repeatedly interrupted to accuse him of making statements that were “false” and “untrue,” before asking for “help” from an anti-Trump guest who accused Malpass of coming on the show to “lie.”

Readers are encouraged to view the video to the end to watch Trump antagonist Kurt Eichenwald laugh, across the airwaves, in Malpass’ face. Republicans/conservatives be warned: to be Reid’s guest is to volunteer to serve as her punching bag.

DAVID MALPASS: The Clinton Foundation, what we’re talking about is hundreds of millions of dollars —

JOY REID: That’s all publicly searchable in their open database.

MALPASS: I was a senior State Department official —

REID: Sir, sir, sir: you can’t just state something is a fact when it is not.

MALPASS: I can’t conceive how that was being run and allowed at the State Department —

REID: Sure you can. It’s actually quite open.

MALPASS: Meetings were set up for money.

MALPASS: The timeline is really clear. Certain [people] were denied meetings by the State Department, they paid money to the Clinton Foundation and then they got a meeting.

KURT EICHENWALD: Several points. Number one, I’ve been coming on TV for years to talk about these kinds of things and every time I’m on with a Trump surrogate, they just get on and lie.

REID: We’re going to end the segment but I’m going to do one more comment from each.

MALPASS: The Clinton campaign could have handled this very differently by having the emails come out much earlier.

REID: What do the emails have to do with the Clinton Foundation?

MALPASS: The emails are bringing out information.

REID: No they’re not. It’s not where the Clinton Foundation information came from. You’re conflating, sir.

MALPASS: — to stand in front of the public

EICHENWALD: This is like the demolition derby of scandals.

MALPASS: Now that wasn’t even a press conference.

MALPASS: It was eight minutes long.

MALPASS: No. They go long enough for more.

REID: Thank you, David. Kurt, I’m sorry, we are out of time. I’m sorry, I don’t even know what else to say.

Many progressives are feeling rapture over this, but the words of surrogates mean much less than the manner in which people are treated.

These people, so smug and certain, do not seem to realize how mean and small they come across.

Clinton talks of respect, but she and her disciples, including in the media, adopt an approach that turns the word on its head.

Talk about an echo chamber. Nobody is being convinced of anything on that show. What a joke. The test pattern probably has higher ratings.

Sounds like she should have to report her show as campaign contributions to the FEC for her personal political action committee for hilldog.

Independent expenditures are not contributions, and are not reportable to anyone. First amendment.

What professional politicians miss is the greatest opportunity to shut people down like this. THey just don’t know how.

Take it from somebody who has been selling for longer than most of you have been alive. There really are a couple of magic phrases, or more correctly, magic questions.

In Joy Reid’s case, people need to ask the simple straightforward question a t will always stop them cold.

“How do you know that what you are saying is true?”
Or
“Can you tell me where you learned that?”

Statements let the other party win, ALWAYS. A question always puts the asker at the advantage.

What is the definition of “win?” The GOPe wins money and power when we and the USA lose.

I do not think they want to win these confrontations because anybody with an IQ north of room temperature would be prepared to win, especially since the pattern is so consistent.

I would suggest you are wrong. Let me ask you, how did you llewrn the we lose if the GOP wins. Seems like you were told that, but have no a priori knowledge of such.

How did he learn that? Oh you sneaky sneaky person! That’s your super secret spy technique! Luckily you exposed it in your first post, so we aren’t fooled!

Seriously though, the proof the Repubs don’t care to win is everywhere. I can tell you that I learned that from the internets and that’s how I know it’s true.

You may have missed it, but, I referred to the GOPe not the GOP.

When your premises will not stand up to scrutiny and you control the forum, it’s easy to win arguments. Continue to deny reality and the rest of the dinosaur media will back you up.

When you hang around with dogs you are going to get dog s**t on your shoes! Don’t all Republicans know this?

Why do republicans go on this piece of shit’s show?