“David vs Goliath” legal battle over a pond 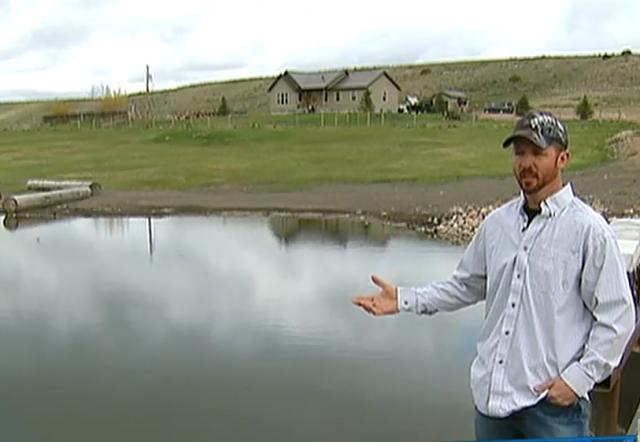 While the Obama Administration is setting the country on fire with public school transgender bathroom dictates, a Wyoming man has scored a major legal victory against a regulatory Goliath.

The Pacific Legal Foundation represented Wyoming rancher Andy Johnson in challenging an EPA compliance order threatening him with $37,500 per day in fines for constructing a stock pond on his property.

The PLF lawsuit argued that Johnson’s pond is expressly exempt from the Clean Water Act and that the stream in which he constructed the pond is not a jurisdictional water because it does not affect a navigable water. And, as an extra bonus, a former Corps of Engineers enforcement officer asserted that Johnson’s pond has many environmental benefits, including fish and wildlife habitat and enhanced water quality.

Johnson and the PLF team scored a legal victory this week in a settlement with the EPA that allows him to keep his stock pond.

…Johnson maintained that he had sought and received a permit through the State Engineer’s Office, which confirmed that the stock pond met all of the office’s legal requirements.

…Specifically, the consent decree requires that Johnson supplemen this pond by planting some “dormant live willows” in the area and build a fence on the north side of the pond for livestock control. Aside from that, the decree states that “the United States, its departments or agencies, covenant not to sue or take administrative action against Mr. Johnson under the Clean Water Act” with respect to its original complaint involving the stock pond.

Yet despite the victory, [PLF attorney Jonathan] Wood said all of this could have been avoided if the EPA had simply listened to Johnson when he first protested the agency’s concerns. From the very beginning, Wood said the agency had inaccurately characterized the stock pond and the body of water it connected to.

It is hard to imagine how the EPA’s agents could claim that Johnson’s construction was not a “stock pond”. Furthermore, the federal government can regulate waters only if they have a “significant nexus” to navigable waters. It is also difficult to see how a man-made irrigation ditch (where the water is used for agriculture), into which Johnson’s pond drained, meets the definition of “navigable” by anything but a duck.

On the other hand, today’s EPA has brought us the Animas River Spill and the Flint Water Crisis, so perhaps it is the “new normal”.

Johnson, a family man with four children, is thrilled with the decision.

This is a huge victory for us as well as private property owners across the country,” said Andy Johnson. “The next family that finds itself in our situation, facing ominous threats from EPA, can take heart in knowing that many of these threats will not come to pass. If, like us, you stand up to the overreaching bureaucrats, they may very well back down.

… And if we could say anything to the EPA….this was about more than just a pond. This was about a family of good, hard-working Americans that were willing to fight to the end for what they believed in!

Many people are wondering what they can do to make a difference in this country, especially given this year’s election chaos. Donating to the Pacific Legal Foundation is one way Americans can help at a profoundly important level.

No matter who is elected in November, the bureaucratic Goliaths that Obama has made even larger these past 8 years will still be there.

You go into a new area much the same as the Roman Army did. The first five males you came upon you grab and crucify. Everyone goes along after that. AL Armendariz, former Deputy EPA Administrator. Mr Armendariz goof was not in thinking thusly, but in letting the EPA’s preferred method out.

As John Yoo explained in a recent AACONS podcast, we are governed by Liberty’s Nemesis – the administrative state. An election of Trump or Hillary would not change that. It would not benefit them.

Ted Cruz would put the regulatory agencies on the chopping block.

Congress has not given the EPA direction since the US met all of its initial environmental goals, and the entire agency is busy finding new things to do. Meanwhile, they have forgotten the basics.

At one time I owned 10 acres near Mt. Rainier in Washington State. The property had a creek running through it and a man made pond. The pond was about 100 by 150 feet and had been there since forever. When I bought the property the county had a 35′ setback from the creek for any buildings. After about a year they changed that to 100′.

They did this while I was having an architect design a cabin. OK…. we can put it over there instead of where we planned. Then they decided they wanted the 100′ added to the original 35′ so the total setback was 135′ and you also had an additional 15′ setback from the line of the setback.

Oh well….. paid an ecologist $5K to do a wetland survey (All of Western Washington is a wetland), paid the architect, paid the septic design engineer and got a building permit for a 1,000 sq foot cabin that made minimal impact on the property or environment.

The day after I got the permit a guy from the county shows up with a map. There was a dirt road that led to the property and ran along one side. According to his map there was a creek that crossed that road. We were standing on the road and there was no creek crossing the road or anywhere near where it showed on his map. He agreed that there was no creek but said that he had to go by the map anyway and I could not build where I had just paid almost $20K in permits and fees because I still had to honor the 135′ setback from the creek that did not exist.

The property was 660′ by 660′ and there was no other place to build. The rest was classified and registered as “wetland” and I was being required to post signs that this was a wetland and I was not to remove anything or do anything to the wetland area. They actually told me that I had to minimize walking through the wetland designated area.

That was it! I dumped the place and the guy that bought it just went ahead and built a house and paid the fines, which totaled almost $35K.

It was the do it first and then ask forgiveness plan.

No…. you don’t really own the property.

I tell the people back home the same thing. We own nothing except for our memories and education! Sad but true none the less.

The real and tragic shame of this entire situation is that it had to be litigated in the first place. How have we become so perverted and so off track from what America used to stand for that we are now reduced to having our government attack some poor farmer with threats of multi-million dollar fines for doing something beneficial to his land, something beneficial to nearby wildlife, a valuable water source in a semi-arid location, and something so trivial that it could never possibly affect anything more than a few miles away.
>
Had this EPA existed since the America was founded, then we never would have moved beyond the original colonies, we never would have become anything more than a third world nation, we never would have allowed modern, labor saving devices such as cars, hydroelectric dams, airplanes, virtually all heavy industries, and virtually everything other than small farms and cottage industries to be allowed.
>
At the time the EPA was created, it was a much needed agency. However, over time, the EPA has become the poster child for all that is wrong in our government. This includes their incessant growth in size and budget, their expanding of their mission as they seek more and more power over everyday Americans, using their rules as weapons against American citizens to ensure compliance with their every whim, and their increasingly dictatorial edicts that violate due process. If the rest of our government follows the path the EPA and other agencies such as the IRS are taking, then we as a country and a people are indeed doomed.

Cruz would do nothing

“Specifically, the consent decree requires that Johnson supplemen this pond by planting some “dormant live willows” in the area and build a fence on the north side of the pond for livestock control.”

I feel like those demands were petty requirements to force something from Johnson so that he couldn’t walk away with a total victory.

The misinformation, concerning this “stock pond”, made by the representatives of Andy Johnson are simply mind boggling. In the first place, a pond is a “standing body of water,” not having a permanent connection to a flowing body of water. A “stock pond” is usually a hole, dug into the ground, which is then allowed to fill through ground water seepage or where water is introduced through a single man-made irrigation ditch, from an existing water course, which terminates at the pond. In this case, Johnson dammed the Six Mile Creek [a naturally occurring water course], which flows across his property, into the Black Fork River and then into the Green River. The Green river is a navigable waterway and, as the Six Mile Creek is a naturally occurring feature, not a man-made water course, and it feeds into a a tributary of a navigable water course, it is, therefor, a tributary of the Green River and subject to EPA environmental rules. This was not a pond but a small lake created by damming a free-flowing waterway which now ran through it.

What got the EPA’s panties in a twist, was the fact that Johnson dammed the Six Mile Creek tributary and failed to get any EPA permits for it. Then, to make matters worse, he told the EPA to go pound sand. The suit was settled because it is very likely that, had Johnson filed for the required permits, they would have been approved, if the watercourse was allowed to continue to run and no significant new pollution was discharged.

But, this was not a “stock pond”, in any traditional sense of the term. The EPA took an extreme position, with regard to enforcement activity. But, Johnson is not an innocent farmer being assaulted by the evil Washington bureaucracy. He created the situation by his own actions.