EPA Memo: Flint not worth going “out on a limb for”

EPA Memo: Flint not worth going “out on a limb for” 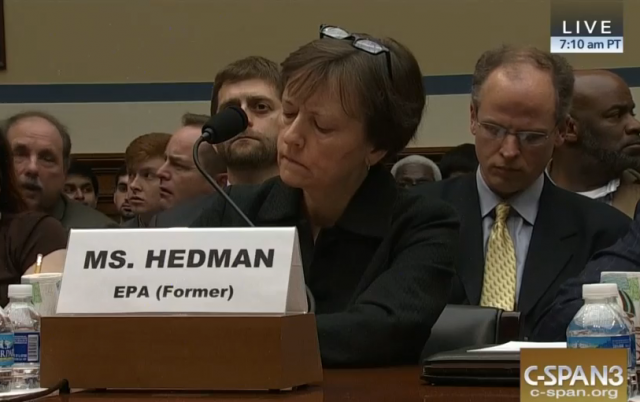 In previous reports, I noted congressional hearings were being scheduled to review the Flint water crisis.

Our representatives are now reviewing the bureaucratic bungling that led to Michigan citizens being provided lead-contaminated tap water at top-notch dollars.

One piece of evidence reviewed was a damning memo from the EPA.

An internal Environmental Protection Agency memo showed officials didn’t think “Flint is the community we want to go out on a limb for” while residents of the Michigan town drank lead-contaminated water.

House Committee on Oversight and Government Reform Chairman Jason Chaffetz presented an internal memo between the EPA official who oversees Michigan, a branch manager in the EPA’s Region 5, the associate director of the water division for Region 5 and an EPA environmental engineer about the water crisis in Flint.

In the memo, one of the officials — it wasn’t clear who based on the screen shown by Chaffetz — said Flint wasn’t worth helping.

“Perhaps she already knows all this, but I’m not so sure Flint is the community we want to go out on a limb for,” the memo stated.

Chaffetz was incredulous at the memo.

“Are you kidding me?” he said, looking at Susan Hedman, the former director of EPA’s Region 5, which oversees much of the Midwest including Michigan.

The representatives also heard from a noted whistleblower in the case, who experienced bureaucratic retaliation for doing his job of actually protecting public health.

A federal regulator who first raised concerns about Flint’s water more than a year ago criticized his agency’s handling of the situation in September, saying the U.S. Environmental Protection Agency appeared more concerned with “trying to maintain state/local relationships than we do trying to protect the children” in the city

As early as February 2015, Del Toral had said high lead levels in at least one residence in Flint concerned him that the problem could be more widespread and he wondered openly if the city was practicing corrosion control, which he said was required. He indicated in several e-mails released by the U.S. House Oversight and Government Reform Committee on Tuesday that he felt he was being disciplined for giving a Flint resident a copy of his draft report that indicated there could be problems throughout the city.

Dr. Marc Edwards, the Professor of Environmental and Water Resources Engineering at Virginia Polytechnic Institute and State University and one of the key researchers into this case, blasted the EPA.

Based on the testimony from Hedman, who resigned during the furor over Flint’s tainted drinking water, Edwards said ruefully that it appeared the agency had a policy of “willful blindness in this case to the pain and suffering of Flint residents.”

He called EPA administrators “unremorseful for their role in causing this man-made disaster.” He added that they were “completely unrepentant and unable to learn from their mistakes.”

That seems except for Hedman, who is one of the rare bureaucrats who has received at least a drop of justice.

If only we had a President who knows how to say “You’re Fired.”

Maybe we should get that TV guy.

“Perhaps she already knows all this, but I’m not so sure Flint is the community we want to go out on a limb for,” the memo stated.

Congress can cite all the damning evidence they wish, expose every single culpable minion within the EPA, and provide the DOJ with mounds of criminal evidence but not one thing will be done to anyone.
Every last one of them will “retire” with a full government guaranteed pension paid for by the American Tax Payer with nary a single blemish anywhere. Free for ever to relax on the patio while grilling steaks and vacationing in the Virgin Islands.

You left out finding a way to blame it on Republicans, preferably Bush.

Obie1, you should read some of the state dems and the plantation slaves demands that Gov. Snyder resign.
Not saying he doesn’t have some culpability, but it’s a real political football for them here in Michigan.
Snyder hasn’t been the best gov, but our last one, Jenny “mole face” granholm was worse.

You are so right. There will be hearings, councils, congressional investigations , and the entire thing will be blamed on the governor and the vast right-ring conspiracy.

Oh, so the EPA gets to pick and choose the communities who will be protected and those who will get to suffer from contamination. It’s past time for the governors of every state to take back their states and evict all the feds who rule over those states through unconstitutional program mandates and policies.

The EPA is more of a danger than a help. It is worthless in fact it is worth less to America than nothing.

EPA – Green on the outside, Red in the middle and loved by our hybrid President!

Nothing will change until the executions of such criminals begin.

“willful blindness in this case to the pain and suffering . . .”

“unremorseful for their role in causing this man-made disaster.”

“completely unrepentant and unable to learn from their mistakes.”

Behold our government, and the BFF agency of the Democrtatic Party. Seems the same people who throw the word ‘racist’ around like it’s the newest flavor of the year have outed themselves. I suppose the EPA does not consider poisoning the mostly minority town of Flint as racist at all. Oh, and about that pesky law protecting whistle-blowers, guess that little impediment in the quest to hide the truth has been thrown under the bus, also.

S’matter, are they all white, or something?

Seriously, this is exactly the kind of problem the EPA is supposed to fix. Not only that, the solutions (pun intended) are known, and not all that difficult.

The EPA has lacked supervision and direction from Congress for years, now. Its entire mission should be reviewed.

I don’t remember the EPA being given control of state and city water departments.

The problem I have with the EPA is that the tech who first surfaced this problem was censured and forced to take sensitivity classes. He was the one who made sure the info got out to the public (so he’s probably going to find future assignments pretty bad).

In the EPA’s defense, Flint has such a bad history of misusing previous environmental grants that anyone might be hesitant at sending any more money their way.

Ever notice how fast the despoliation of the Animas river disappeared from the news cycle?
As I recall no one was fired, resigned or otherwise held accountable.

I live and work in Lansing, MI. – the state capitol. I also work for a company that interacts with local, state and federal government. The majority of employees in an administrative position are there for a paycheck and benefits and literally do NO work and are there for nothing except to bloat their budgets and make an excuse for their existence. Worker bees within these departments are OK except they are all union and have their own issues. So and so can’t change a light bulb because it is not in their union job description. And God forbid if one of them goes on vacation, sick leave or maternity leave. No one else can take over their work load. It sits and rots until they can “make” it back to their desk.

Now take that scenario and apply it bottom to top in the Flint water crises. Flint city officials, Michigan officials, Federal officials. No one will be held accountable because as long as these people get their paychecks and benefits – that we pay for – no one will be held accountable. It is a merry go round of incompetence that is now so bloated with everyone covering everyone else’s ass – that the responsible people will never be brought to justice. And it isn’t just Flint – it is Detroit, Saginaw – any urban area in this state – run by democrats. All they see is taxpayer $$$ that they can siphon off to their pet projects that do nothing for the residents of this state.

Well, now…
Correct me if I am wrong, but couldn’t they introduce a healthy treatment of sodium carbonate into the system which would completely stabilize the lead piping, and then flush it with the correctly stabilized, PH balanced, treated water that they should have been running all along…instead of the acidic river water…
And all is good.
Correct?
My basic chemistry has worked for me over the years, and though I am no expert…
This is garden variety, first year stuff.
Acids and bases.

You’re talking about Ryan and McConnell.

I get the basic fact, EPA didn’t want to go out on a limb. What limb?
What would have been the downside to getting involved? Too many dems in the mix at the local level?
What?

And the people living along the Animus River in Colorado can go to hell as well.