EPA at the epicenter of another lead-contamination crisis

EPA at the epicenter of another lead-contamination crisis 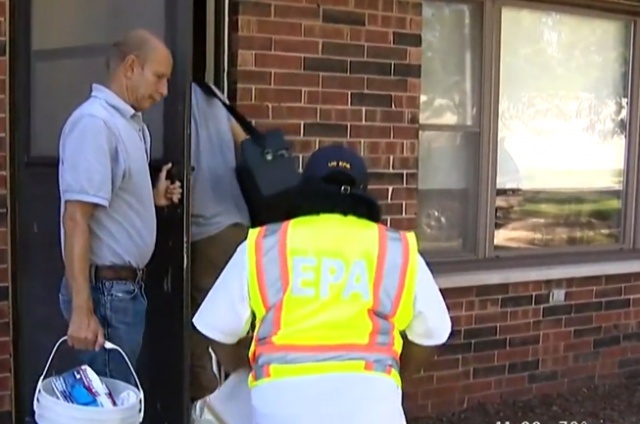 Residents in the West Calumet Complex in East Chicago got quite a shock over a month ago, when Department of Health officials began testing for lead poisoning and arsenic contamination.

…In a letter from the EPA dated July 11, 2016, [Shantel Allen] was informed that some parts of her yard had lead levels up to 66 times above the lead limit and 55 times above the arsenic limit set by the Environmental Protection Agency. But what shocked her even more was that the letter said her “property was tested for lead and arsenic at the end of 2014.” Which means the test was somewhere in a lab, on a shelf, on a desk or getting processed for more than a year and a half before she learned of the danger she and her children were in.

The EPA is being targeted for at least some of blame in these exposures.

…Neither city officials nor EPA staffers have accepted blame for allowing the residents to stay in their homes for so long after the lead test results were known. East Chicago officials told NBC 5 that they weren’t aware of the EPA’s findings until May of this year.

Given that Susan Hedman, the former director of EPA’s Region 5, wrote that Flint wasn’t “worth going out on a limb for,” in a memo, there is ample reason why the East Chicago mayor might not feel his city was deemed worthy of environmental protection from the agency that was suppose to provide it.

The West Calumet complex was built in 1972, in the area of the former Anaconda Lead Products Co. site after it was demolished. The EPA began sampling all of the Calumet area in 2008, and their findings prompted the placement of the site on the Superfund priority list for remediation.

…Mulch had been spread over the ground in their neighborhood to cover up the lead-contaminated soil.

“The wind actually blows that lead right across the property and deposits it right where the residents live.”

In light of the newest batch of testing, residents are now being relocated.

…The EPA is working with residents to clean the interior of their homes as they wait for emergency permanent relocation assistance to move from the housing complex after it was learned earlier this summer the ground on which the complex was built is contaminated with lead and arsenic.

Soil testing by the EPA showed lead amounts in the top six inches of soil around some of the homes more than 12 times the acceptable limit for residential soil.

A CBS Local video offers a glimpse of the testing procedures:

Given that the testing to deem it a Superfund site was done in 2008, and given the levels observed in 2016, one has to wonder why people were allowed to live in those buildings during the past 8 years.

Let’s hope Allen, her children, and the other residents haven’t been harmed by their exposures.

“…one has to wonder why people were allowed to live in those buildings during the past 8 years.”

Nothing to wonder about. The EPA is a political entity. That is the only metric they go by.

Well then, aren’t they lucky that lead poisoning doesn’t work that way.

You have to eat it. Or drink it, or breathe it as dust. Theoretically breathing it as an aerosol containing lead compounds could do it, though I’ve never heard of an actual case—that was investigated years ago when we were all supposed to panic over lead bromide in car exhausts.

In parts of the world where inhaling gasoline fumes (usually leaded) for a “hit” is a thing (yeah, WFT?) there have been claims of lead poisoning, but actual evidence seems slim; practitioners get sick, and locals jump to the conclusion that lead is the culprit. Maybe, maybe not.

Don’t eat paint chips, don’t suck on things painted in lead paint, don’t chew on fishing sinkers or bullets, be careful when sanding old paint off walls and furniture, don’t eat dirt outside of houses which has little chips of lead paint in it—yes, young kids do some weird crap— and you should be fine.

At first I would have said that short of eating dirt, there is no real danger here. Having been a contractor for EPA for many years, I’m usually a skeptic.

I definitely give the EPA and F- for promptness.

But IDK about this residential area. If this report is accurate the lead levels are pretty high. AFAIK the recommended max for lead in soil is 400 ppm and 1,200 ppm in “play” areas. If the report is correct that soil levels are 66x that then the concentrations are pretty damn high.

Though I recongnize Maximum Contaminant Levels are often, arbitrarily, an order of magnitude any scientific standard of harm, if any.

If it were me, EPA should offer free blood testing for lead and arsenic for any child in the area. Immediately.

But I fear these residents are looking forward to free relocation instead.

The lawyer’s statement that the lead is blowing in with the wind is plain stupid.

China has a massive problem with ADHD caused from heavy metals toxicity. “Decline in crime”? Looks like in places like Chicago lead poisoning from a 9 mm is on the rise.

Places like Chicago have thousands of building that were repainted and the new paint merely covered the lead paint. As that flakes off the lead paint is exposed and it too flakes off. And of course, how many of the older buildings still have lead pipes or soldered pipes?

Shouldn’t the testing have been done in the first few years of the EPA’s existence? The lead plant may have closed before the EPA was created but former plant sites were supposed to be tested.

There is often a reluctance to test because they are afraid of what they will find. I worked on a project in a large Midwestern city, where we had to do some excavation in a public park. We were forbidden to sample anything except where we were going to dig. The reasoning was “If we don’t know about it, we don’t have to spend money fixing it.”

I had another project where it was suspected that the soil was contaminated with radium from the old Elgin watch works. We were not allowed to test at all before construction. One of the fears was that, if we discovered radiation, the tailings from the drill hole would be radioactive waste which would have to be disposed of at great cost to the city. We couldn’t just put them back in the hole they came out of.

It is active ignorance as a management tool.

$30 Purolator filter. Done deal. If you’ve let things go to where you have to live in a West Calumet public housing, lead might be the least of your problems.

Any way EPA can blame globull warming as the cause?
Want to guess how many EPA officials will be fired and/or prosecuted?

They would rather blame BOOOOOOOSSSSHHHH!!!!

Never mind that Democrats have been running Chicago for 60+ years.

Maybe its like the book 1984 in which every agency actually does the opposite of what its named. Ministry of Truth is responsible for propaganda, etc.