VIDEO: Elizabeth Warren runs away when Ohio State student says “you lied about your ethnicity”

VIDEO: Elizabeth Warren runs away when Ohio State student says “you lied about your ethnicity” 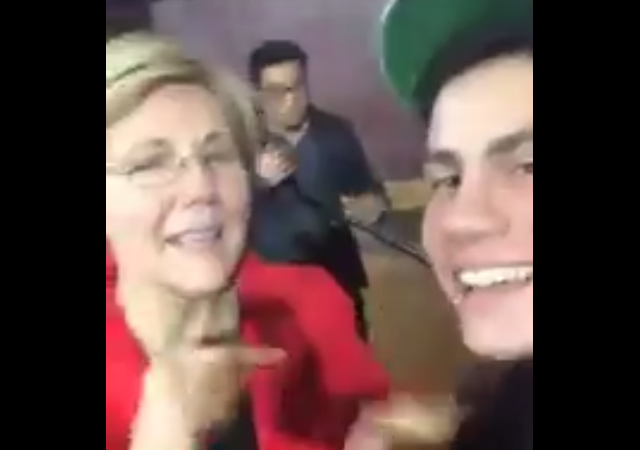 I haven’t laughed so hard in a long time.

It’s an issue she avoids like the plague for good reason, she’s guilty as hell.

Here is Anne at 2012 Netroots Conference trying to ask a simple question:

“Just one question. I’m from Legal Insurrection and I’d love to ask you if you view yourself as a role model to women of color?”

Anne never got an answer to the question, just a clipboard in the face from one of Warren’s staffers.

Warren has been in a name-calling Twitter war with Donald Trump over Warrens ethnic fraud. Trump is right about Elizabeth Warren’s Native American problem.

With that as background, Warren appeared for Hillary at Ohio State University. But all did not go according to plan. A pro-Trump student used the opportunity of taking a selfie to ask a few questions:

Student:“How does it feel like losing to Trump this year?”

Warren: “We’re not going to lose to trump this year.”

I think this is the original source of the video:

One correction is in order. She lied about her ethnicity to try to advance her career, not for a scholarship, but that’s a nuance, the ethnic fraud is the big picture.

I’d like to send her a copy of Del Shannon’s “Runaway”!
https://www.youtube.com/watch?v=0S13mP_pfEc

Just came to post the video and saw you had it, love it when the lying crooks are put on the spot and they flee.

This is why I dubbed her “Princess Running Bare”.

Rags, that calls for a song (to accompany “Runaway” linked above):
Jim Nesbitt’s “Runnin’ Bare”.

That’s a good one. Although, I was thinking more along the lines of this one:
https://www.youtube.com/watch?v=M3OOKAqf2Js
“Runnin’ Bear” by Preston

Hell, if she was any kind of an up-and-coming Democratic contender at all, she wouldn’t run away, she’d make up another lie. What an amateur.

On the other hand, it might be the most honest thing she’s done in a while.

However, the questioner jumping from consideration of beating or not beating Trump to lying about ethnic background is a non sequitur of almost Democratic grandiosity. The matters of whether the D’rats win or lose this election, and whether Warren is a lying dirtbag, have little to do with each other.

Seems to me that someone has a complaint for assault and battery….

She is a coward and a fraud.

She’s still a possible Dem candidate for prez at this point and doesn’t want to queer that.

Walk away and pretend it never happened.

Hats off to this student. I think the boy’s got a future! 🙂

Despite my despising Elizabeth Warren, I think she behaved like a good sport here. And, I think JackRussellTerrierist is correct.