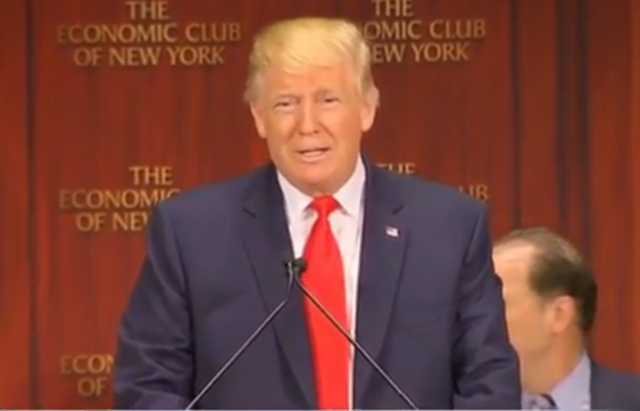 The plague of unbridled regulatory promulgation has sicked the American business environment, especially the environmental protection rule-making that has been especially toxic.

During a detailed and address to the Economic Club of New York, GOP presidential hopeful Donald Trump offered his plans for creating robust economic growth by targeting the “regulatory industry”, as well as tax reforms and better trade deals.

The crowd cheered when Trump described a key component of his fiscal plans, reducing the corporate tax rate to 15%, then began targeting the regulations that stifle American business creation and growth.

…In 2015 alone, federal agencies issued over 3,300 final rules and regulations, up from 2,400 the prior year. Every year, overregulation costs our economy $2 trillion dollars a year and reduces household wealth by almost $15,000 dollars.

I’ve proposed a moratorium on new federal regulations that are not compelled by Congress or public safety, and I will eliminate all needless and job-killing regulations now on the books.

This includes eliminating some of our most intrusive regulations, like the Waters of The U.S. Rule. It also means scrapping the EPA’s so-called Clean Power Plan which the government itself estimates will cost $7.2 billion a year. This Obama-Clinton directive will shut down most, if not all, coal-powered electricity plans in America. Remember what Hillary Clinton said? She wants to shut down the miners, just like she wants to shut down the steel mills….

He also addressed energy reform, which would “lift restrictions on all sources of American energy production.”

In what he called “the foundation for everything,” Trump reiterated his pledge to renegotiate trade deals so that they’ll favor American workers.

Trump said his plan would open up a “new highway of jobs into our country.”

Flint, Michigan was also part of Trump’s discussion. The city has been the focus of a lead-contamination disaster that was due, in part, to an EPA official’s attitude that Flint “isn’t worth going out on a limb for.”

…To draw a contrast — and to make the case that changes in the US are required immediately — the Republican presidential candidate talked about Flint, Michigan, which he visited Wednesday.

The proof that Trump’s address was successful is shown by the hyperbolic response of progressives about Trump’s mention of “the food police“.

However, as I have noted the erroneous dietary cholesterol guidelines and food industry collusion in fat recommendations, I suspect America will be better off without some of those as well.

I will also note that salmonella cases have been rising under Obama, partly because people have taken to keeping their own chickens for eggs and meat due to the current economic stagnation.

The fact that progressives are squawking means Trump’s economic address hit all the right notes.

I am sure this will help his campaign, the status of which I discussed with Sivio Canto on Canto Talk today! We also discussed the NFL boycott movement!

More of this please.

I was just ranting to my husband the other day that It Is Not Right that you have to be of at least average intelligence (and education) to work for yourself because it was just not possible for someone of 90 IQ to comply with all the government paperwork and regulations. Someone who is dim but has a knack for woodcarving, or engraving, or braiding hair – a practical craftsman, not necessarily an artist – should not be prevented from owning and running his own business because the rules are too complicated.

Maybe s/he will fail anyway. Probably, in fact; most small businesses do. But we as a society ought not to make it impossible (at least, impossible to do legally.)

Has HRC done anything like this? Im assuming not because it night require more than a 3 minute speech to deliver any kind of policy statement eh? 🙂

more of this indeed … but was it Trump or his Teleprompter ….

One thing he needs to set down in stone is an unqualified statement such as “My first act as President will be to immediately cancel every executive action and suspend every new government regulation put into effect within six months previous to my inauguration.”

One of the most infuriating things a departing dem does is to sow the ground with land mines and set all of the metaphorical oil wells on fire. The only thing Trump can’t do is to invalidate the inevitable wave of pardons Obama will sign in his last few hours in office, but he can insist that any pardon signed be checked to ensure the pardon-ee has not committed crime A, B, and C, while only being pardoned for A.

He needs to be careful not to throw out the baby with the bathwater. Environmental protection should be among the highest priorities. Unbridled growth is not my idea of improving quality of life. The EPA’s failure has been on the execution side of things, not the intent. Implement current laws correctly before creating a spate of new ones.

“The EPA’s failure has been on the execution side of things, not the intent.”

I think you may be misunderstanding the “intent” of the EPA. It’s not what you think it is.

Ok, I’ll admit I’m a long way from knowing everything. Maybe I’m looking back at its hopeful inception. So maybe I should ask what is its charter, rather than what is its intent?

Every federal regulation that carries an enforcement / penalty should be deemed null and of no effect until such time as Congress enacts it into law in the course of normal Congressional business. This goes especially for new regulations.

what will Ivanka say?